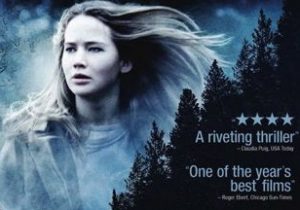 Winter’s Bone, the darling of last year’s Sundance Film Festival, where it won the coveted Grand Jury Prize as well as a special Jury Prize for Screenwriting, dazzles not only the mind but also the heart with its characterizations, its plot and its tone. Of its many themes perhaps the most interesting is the difficulty of perseverance in a universe that seems relentlessly stacked against one. Ree Dolly, a seventeen year old girl who lives in the southern Missouri Ozarks and Bone’s main character, is saddled with a basically catatonic mother and two siblings aged 12 and 6 for whom she has complete responsibility. Her father, in and out of trouble, has put their property up as a bond for his release from jail, and now disappeared. The film’s plot revolves around an odyssey in which Ree, played by relative newcomer Jennifer Lawrence, goes looking for him, and, as the IMDb summary puts it, “hacks through dangerous social terrain” as she does so. That terrain includes the searing edginess of mountain poverty, the dangers of backwoods drug dealers, and the general rawness of life, lived as a mother and caretaker far before one’s time. All these adverse circumstances find in Ree a heroine in every way their match.

Extraordinary performances, particularly by John Hawkes as Teardrop Dolly and Dale Dickey as Merab, but really by all the film’s actors (some of whom were locals with no acting experience) make this film as engaging as any for a long, long time, but chief among them is Lawrence, who plays Ree with a subtlety and grace that has to be seen to be believed. Ree’s tenacity for good, the depth of her willingness to risk her life to see the right thing done, derives from several sources, all of them challenging for the Christian. First, and clearly foremost, she recognizes the need her siblings have for her protection and provision of even the most basic things in life, and she responds self-sacrificially to those needs. They are allowed to live the life of children, happy with their trampoline, their walks in the woods, their dolls and dogs, but she also makes them face their fears, and, slowly, with love, schools them in the way to live in a world that they already know is hard. She cooks for them, drills them on their spelling and oversees their homework, teaches them how to shoot a gun and skin a squirrel. Poignantly, when her friend Gail asks her what she’s doing with “all them guns,” Ree matter-of-factly replies she’s “just teaching them a little bit of survival.” When their own parents —Ree’s parents, too— fail them, she steps in and does the best she can to help the children not only to survive but to live, and to live as if the world is a good place with wonders and joys, even in the midst of its brutalities and limitations. She is their still point in a turning world.

But when she needs to be, Ree can be as hard as nails, hard enough to face, and even pursue men with guns, menacing women who beat her senseless, and drug lords who could kill her as easily as spit. When, in the final frames of the film, she is asked to do something so grisly even imagining it makes the blood run cold, her courage and grit reaches its apex. Never planning beyond the next step, Ree is driven by her love for her siblings and her deep sense of responsibility for them, but she is also driven by the second source of her perseverance: poor as it is, she loves the land and the simple log house they inhabit because it is theirs, because it is home. Debra Granik, the writer and director of the film, has a remarkable sense for establishing tone and atmosphere, and her work gives the viewer this same sense that, though the world of the Ozarks is ugly and miserable in many ways, that world exists in the midst of a beauty and an elegance that makes one appreciate it anyway. The film, for instance, begins with a lovely Ozark tune about hearing a lullaby “way down in Missouri…on my momma’s knee,” when, suddenly a long shot fills the screen, a landscape that is at first bleak and depressing, showing a hilly, scraggly field strewn with cars, an old RV and a school bus. But the camera lingers long enough to allow the eye to take in the hills beyond and a cloud-filled, winter sky, beautiful in their blue and gray silence. From there the camera cuts to children bouncing on a trampoline, riding on a skateboard, playing with new-born puppies. These are Ree’s brother and sister and while they play, she hangs wash on the line, repairs an old doll, takes care of the daily chores. Finally, as the opening sequence finishes, Ree speaks the first words of the film: “Come on, let’s go.” They’ve had their play-time, allowed by her work on their behalf. Now it’s time for supper. Life is hard, but life is good.

Her final words, also the final words of the film, echo the opening words by speaking almost their opposite: “I ain’t goin’ anywhere.” It is a promise to her two siblings not to leave them, not to join the Army. As she puts it “I’d be lost without the weight of you two on my back,” but it’s not just going away from them that would cause Ree to be lost. She’d be lost without the woods, stark and leafless as they are in February and March in that part of the world. She’d be lost without the music, heard throughout the movie, roots music that can only be spawned in the hills of places like Missouri and Tennessee, symbolized by her father’s banjo that her little sister plays at the end of the film, music that speaks of longing and of joy in ways that only old-time folk music can. She is a woman of the land; she knows her world, and longs for no other.

Ree’s wisdom is also exceptional. Early on in the story she delivers to her younger brother one of those lines that punches you with joy it is so astute. Her neighbors have killed a deer and are skinning it as Ree and Sonny watch from their porch. Sonny innocently says, “Maybe they’ll share some of that with us.” Ree replies, “That could be.” Sonny persists, “Maybe we should ask.” Ree turns to him, takes his chin in her palm and turns his face toward hers, speaking clearly in a strong, motherly fashion: “Never ask for what ought to be offered.” In one sentence both their dependence on the kindness and support of their neighbors and the dignity and self-reliance they know they must retain at all costs to live in this world, burst the heart of the viewer. But there is something more in this gentle command: the maxim draws the boundary between these two conditions. This is wisdom.

Winter’s Bone is as good at every level as any film this year, and that is saying something. Hopeful, without ever straying from depicting the grit and gristle of the “hard-knocks life” experienced by its characters, it is a movie not to be missed.

1. Several times Ree is faced with giving up the search for her father. Many times she is counseled to do so. Was she right in continuing? Would you have? Why or why not? 2. Can you think of a parallel situation in your own life when it was all up to you? What did you do? 3. Only once in the film is there any reference to anything spiritual (when Ree, teaching the children to shoot a rifle tells them to kneel down “like you do when you’re prayin’”), yet the reference seems to indicate that prayer is a natural part of the Dolly family’s life. Are there other indicators? How would you have changed the film, if at all, if you had wanted to show the Dolly family as Christian? 4. Other than Ree, with which character did you most identify? Why? 5. The script has been cited for its elegance, not just in its dialogue but also for its tightness of plot and its full development of even minor characters. Can you cite some examples of this elegance? Do you agree with this assessment? 6. What would you say are the richest truths of human experience portrayed by this film? Give examples of those truths.