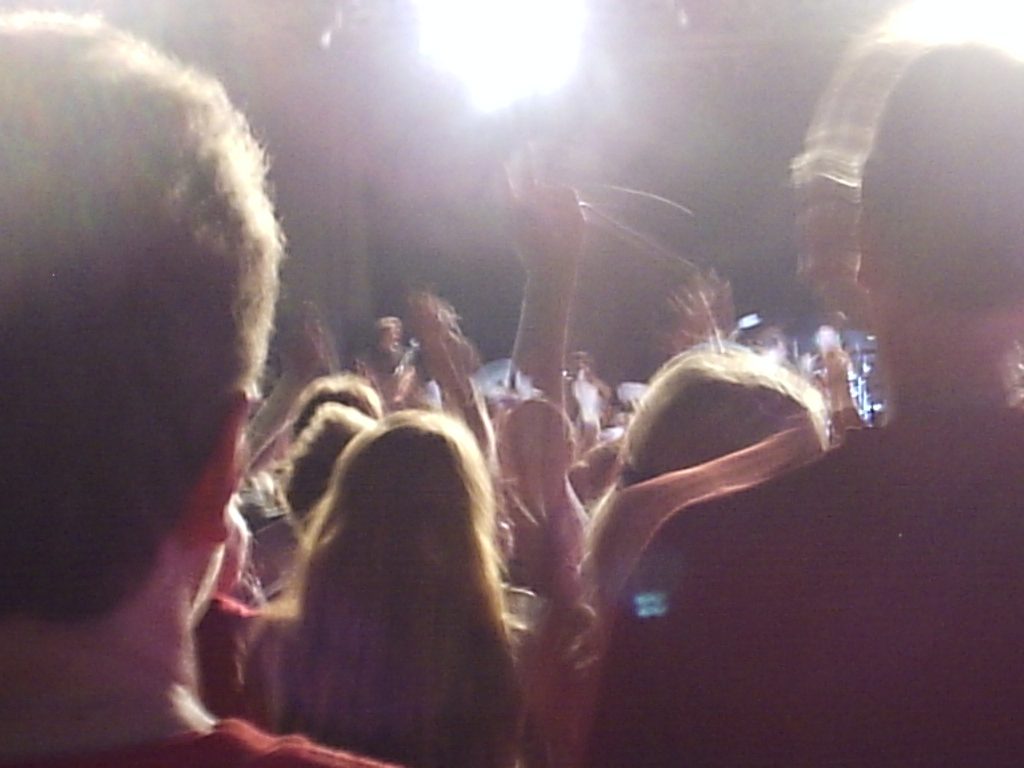 Editor’s Introduction
In the following piece a music lover, after attending Christian concerts regularly for a decade and a half, explains why he no longer attends them. And in so doing he raises some interesting questions that discerning Christians may wish to discuss.
*****
This will not be a rant. When I first tried to write this, that was the result of my efforts. I am not sure that anyone has written anything critically about how Christian concerts are done. To be sure, the question of if they should be done has been discussed since the phenomenon surfaced years ago. Since I am unsure if the subject I am about to broach has ever been formally discussed in the Christian community, I do not want to set a precedent of ranting. Rather, a plea is what I would prefer to offer. A plea for discernment.

For years I have gone to concerts done by Christians. I have seen most of the popular bands and soloists in the Contemporary Christian Music market over the past fifteen years. Some were entertaining, some were not and few were what I consider high-caliber talent. But regardless of how talented they were there was one thing that almost all of them did during their time on stage: talk. And when I say talk, I mean lots of it. Much more than at any other kind of concert. If I went to see the symphony, the talking would be at a minimum. The only form of communication might be a program given to the patrons so they can follow along. When I went to see the Rolling Stones in ’89 I do not remember a word Mick said, if he said any at all besides maybe introducing a song, but I do remember the songs—as a matter of fact I will never forget them.

Why is it that when someone goes to what is called a “secular” concert, there is not the expectation of the entertainer talking about their world view at length and then calling for others to believe the way they do? There are many ways to answer that question I suppose. Maybe they do not know how to articulate their world view. Maybe they just do not care. Or maybe they came to play music, and as a musician that is what they want the people to enjoy.

Is the Christian concert about the music? Or is it a means to an evangelistic end? I am afraid that most of the time the second answer is the most truthful. I believe that most Christian musicians do not think enough of their craft to let it stand alone. So, they throw in an altar call or a worship service or a sermonette in order to justify the enterprise.

Someone might ask if there is harm in doing a concert so that people will hear the gospel. I have two answers. First, is it honest to invite someone to a concert with false motivations? Do you want them to hear music that is good, knowing they will find pleasure in doing so, or do you want them to get saved, and their love of music is a way of getting them in a position to hear how? If you were to be invited to a Bible Study only to find out it is an Amway meeting and you are being targeted as a partner, how would you feel? I applaud those that are concerned for unbelievers, but I would argue that evangelism should primarily flow out of friendships. Let’s leave the “bait and switch tactics” for the pyramid schemes. Also, a musician should be able ply their art and let it stand on its own. We need to recover the understanding that art—whether it be music or drama or literature—is worthy of our attention. Christians should have the highest standards in this arena.

Music as a creative force is powerful stuff. I once heard someone say, “give me the songs of a nation, I care not who writes its laws.” Parents, pastors and politicians all point to the power of music over the young people of this country as a reason for censoring people like Eminem and Marilyn Manson. Is their music the only music that is powerful? Are their concerts the only concerts that are influencing our kids? If they are then shame on us for not giving them something better.

We were created in the image of God so we could reflect His character. God is a creative being who delights in our efforts to be like Him in our creative tendencies. This ought to tell us that the making of music is something that never needs to be dignified by an evangelistic sermon or an altar call. Good music can stand on its own especially if it is music done in light of the glory of a creative God who delights in creation.

1. Using Redmond’s own words, identify the statements in his piece that are key in understanding his argument, his reasons, and his conclusion.

3. Where do you agree with Redmond? Where do you disagree? (Be sure to discuss areas of agreement before detailing areas of disagreement.) Discuss the questions he asks in his piece.

4. Has the how of Christian concerts been adequately by Christians? What resources on this can you identify? To what extent is the topic discussed informally? To what end?

5. Do you find Redmond’s argument(s) compelling? Why or why not?

6. “I believe that most Christian musicians do not think enough of their craft to let it stand alone,” Redmond writes. “So, they throw in an altar call or a worship service or a sermonette in order to justify the enterprise.” Do you agree? Why or why not?

7. Assume that the majority of Christians attending Christian concerts are comfortable with the talking that takes place on stage. To what extent is that important? To what extent is this merely a matter of personal taste? To what extent, on the other hand, is this an issue of far more than taste—say, for example, an issue of dishonesty in selling tickets to a concert, only to have a significant portion of the evening consist of talking instead of music? Or a failure to adequately appreciate the significance of art, which needs no justification? Or a way to trick non-Christians into hearing a gospel presentation?

8. How effective are Christian concerts in terms of evangelism?

9. Some Christians might argue that every opportunity to explain the gospel—including at Christian concerts by the musicians—should be taken. How would you respond?