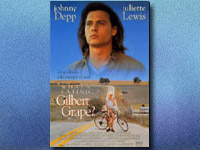 Gilbert Grape is a young man living in a small town, struggling with big problems, both literal and figurative. Since his father’s death, Gilbert has had to play father to his retarded little brother, his dangerously obese mother, and his demanding sisters. As he interacts with friends, lovers, and the dynamics of his town, the viewer begins to understand what’s eating Gilbert Grape, and Gilbert himself begins to understand what it means to be a son, brother, and father.

1. What is your initial response to the film? What difficulties do children who have been forced to “grow up” too soon, or to take the role of parents, face? 2. Up until the end of the film, why do you think Gilbert lets people make fun of his mother? And why, then, does he try to hide the fact (from his mother) that he’s trying to repair the house to hold her weight? What’s different about Arnie that he won’t allow anyone to make fun of him or hurt him? 3. Discuss the ethics of “big business” versus independent business. 4. Throughout the film, Arnie and Gilbert say, at different times, “We’re not going anywhere.” Discuss the importance of this statement for the film, both literally and figuratively. 5. When people feel trapped by their circumstances, especially in their families, how do they typically respond? How should they respond? Is life fair? 6. When Becky asks Gilbert what he wants, he lists something for everyone but himself. What is the detriment of caring exclusively for others? Is this a noble attitude? 7. When Mamma gets Arnie out of jail, she says “you’re free” as she’s smothering him. Do you find this to be a contradiction? What does it mean to give our families, especially our children, freedom? What are the effects of smothering our children emotionally or intellectually? How does our culture treat its obese differently than others? What are the effects of being an obese person in our culture? 8. What are the effects on a family of an emotionally absent father, especially on children? In our culture, where so many grow up without fathers, whether literally or figuratively, what repercussions should we expect? To what extent, if any, has your view of your father shaped your view of the existence of God? 9. Why did Gilbert return home after leaving for the night? 10. What is Becky’s role in the life of Gilbert, Arnie, and Momma (notice the absence of Becky’s name until she meets Momma)? 11. What caused Momma to go up the stairs to her room? Discuss the struggle with feeling ashamed of family members or loved ones, or feeling that people are ashamed with us. What causes shame? Often, people equate shame with guilt; are they the same? What are the effects of equating the two? Do you think that shame has a more powerful affect on us than guilt? Why or why not? Do you even think that there’s such thing as guilt? If so, on what grounds? If not, how do you understand social order? 12. Do you agree with Gilbert’s decision to burn the house?