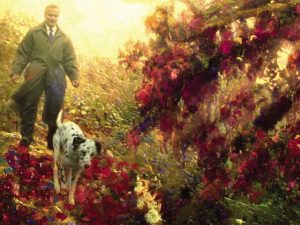 Features & First Impressions
1. Reviewer James Berardinelli says, “What Dreams May Come has the sensibilities of an art film placed into a big-budget feature with an A-list cast.” What most stood out to you about this film? The story? The acting? The visual effects?

2. What Dreams May Come won multiple awards for its visual effects, including an Oscar for Best Effects. How did the special effects serve to enhance the story?

3. What particular images stood out to you? Why did they draw your attention?

4. What artists (painters, poets, writers) seemed to be drawn upon?

5. Were you drawn into the story as it unfolded?

6. What did you appreciate about Chris and Annie’s life together?

7. How did Chris’ death leave you feeling? What about Annie’s?

8. What about the story’s ending… did you find the resolution satisfying? (Why or why not?)

9. What difference (if any) did viewing the alternate ending make for you?

10. And as you think about what you have seen, what other films come to mind?

Key Themes & Points of Interaction with Christian Faith
1. Based upon discussion so far, how would you summarize what this film is about?

2. Thinking in terms of the Christian worldview, what does this film say about heaven? What seems consistent with biblical teaching? What seems inconsistent? What is strikingly absent from ‘heaven’ in this particular film?

3. Once again thinking in terms of the Christian worldview, what does this film say about hell? How does one get to hell? What seems inconsistent with biblical teaching? And yet what images are employed?

4. What statement does the film make about love?

6. What do you think the maker’s of this film wished to convey? And what do you take away with you from your having viewed this film?

Did you know…
1. When Chris goes to the city in heaven and we see people flying around overhead, keep an eye out for characters from Peter Pan (Wendy, Michael, John) and Mary Poppins (Mary Poppins herself).

2. The title, What Dreams May Come is derived from William Shakespeare’s Hamlet (Act 3; Scene 1), where we read: “To sleep: perchance to dream: ay, there’s the rub; For in that sleep of death what dreams may come when we have shuffled off this mortal coil must give us pause…”

3. The last scene in which we see Annie alive, sitting on her bed, writing in her journal, shows a triptych painted by Hieronymus Bosch. The painting is called “The Garden of Earthly Delights” and features three panels, each being Bosch’s interpretation of heaven, earth, and hell.

4. Portions of the hell scenes in this movie were shot on the decrepit, rusted hulk of the Essex class aircraft carrier, USS Oriskany (CV-34). On May 17, 2006, this ship was sunk to serve as an artificial reef. Other portions were shot at the Alameda Naval Air Station in an indoor swimming pool surrounded by blue screen equipment so the special effects could be added in later. In this pool extras, made up as ghouls, spent two 12-hour days.