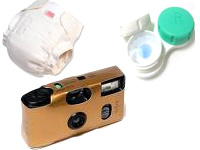 Deliberate obsolescence in all its forms—technological, psychological, or planned-is a uniquely American invention. Not only did we invent disposable products, ranging from diapers to cameras to contact lenses, but we invented the very concept of disposability itself, as a necessary precursor to our rejection of tradition and our promotion of progress and change. As American manufacturers learned how to exploit obsolescence, American consumers increasingly accepted it in every aspect of their lives. Actual use of the word “obsolescence” to describe out-of-date consumer products began to show up in the early twentieth century when modern household appliances replaced older stoves and fireplaces, and steel pots replaced iron ones. But it was the electric starter in automobiles, introduced in 1913, that raised obsolescence to national prominence by rendering all previous cars obsolete. Even the most modern American women hated hand-cranking their cars and were greatly relieved when they could simply push a start button on a newer model. The earliest phase of product obsolescence, then, is called technological obsolescence, or obsolescence due to technological innovation.

The second stage of product obsolescence occurred about a decade later, in 1923. Executives who had migrated to General Motors from the chemical and dye-making giant DuPont adapted a marketing strategy from what was then America’s third largest and most rapidly growing industry: textiles and fashions. Instead of waiting for technological innovations that would push consumers to trade in their older-model cars, General Motors turned to sleek styling as a way of making newer cars more desirable and pulling potential buyers into the showroom. The success of GM’s cosmetic changes to the 1923 Chevrolet indicated that consumers were willing to trade up for style, not just for technological improvements, long before their old cars wore out. This strategy was so successful that it spread quickly to many other American industries, such as watches and radios. The annual model change adopted by carmakers is an example of psychological, progressive, or dynamic obsolescence. All of these terms refer to the mechanism of changing product style as a way to manipulate consumers into repetitive buying.

The most recent stage in the history of product obsolescence began when producers recognized their ability to manipulate the failure rate of manufactured materials. After prolonged use, any product will fail because its materials become worn or stressed. This is normal. But during the Depression, manufacturers were forced to return to the practice of adulteration—the nineteenth century technique of using inferior materials in manufactured goods—as a simple cost-cutting measure: inferior materials lowered unit costs. But these same manufacturers soon realized that adulteration also stimulated demand. After a decade of unprecedented affluence and consumption during the 1920s, consumer demand fell radically with the onset of the Depression, and in desperation manufacturers used inferior materials to deliberately shorten the life spans of products and force consumers to purchase replacements.

Planned obsolescence is the catch-all phrase used to describe the assortment of techniques used to artificially limit the durability of a manufactured good in order to stimulate repetitive consumption. To achieve shorter product lives and sell more goods, manufacturers in the 1930s began to base their choice of materials on scientific tests by newly formed research and development departments. These tests determined when each of the product’s specific components would fail. One of the few known examples of this monopolistic (and hence illegal) strategy was a change, proposed but never implemented, to shorten the life of General Electric’s flashlight bulbs in order to increase demand by as much as 60 percent.

As obsolescence became an increasingly useful manufacturing and marketing tool, an eclectic assortment of advertisers, bankers, business analysts, communications theorists, economists, engineers, industrial designers, and even real estate brokers contrived ways to describe, control, promote, and exploit the market demand that obsolescence created. What these approaches had in common was their focus on a radical break with tradition in order to deliver products, and prosperity, to the greatest number of people—and in the process to gain market share and make a buck. Both goals strike us today as quintessentially American in spirit.

Excerpted from: Made to Break: Technology and Obsolescence in America by Giles Slade (Cambridge, MA: Harvard University Press; 2006) pp. 3-6.