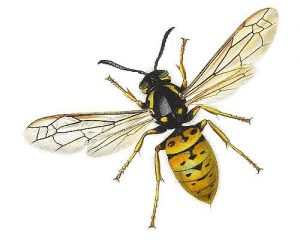 a flagging wasp,
compromised due to accidental indoor entrapment,
flew up her shorts.
she didn’t feel it just then, dancing about the porch,
the wasp likely clinging to her swinging jersey knit.
it wasn’t until a few minutes later
in the dining room,
still romping with late day energy,
that she sensed the small alien’s location
and quickly batted at her thighs,
hollering full mouthed sobs of horror
at the sight of the assailant
and the thought of what might of been.
nothing was, by the way,
to be,
for as I’ve just explained
the bug was beat,
and no fuel remained for flight or sting.
as it was, he fell beneath the breakfast bench
with what I imagine to be a microscopic thud,
and listlessly awaited his finish by flipflop
or rolled up recycling.
it was the former.
the girl could not be calmed for some time,
plagued by the remembrance of his tiny feet
and the minuscule gust of his cellophane wings
near her knees.
alas, for turmoil endured:
homework could not be attempted
and the clean up of day’s amusement, quite impossible.
vows of morning courage were swiftly pledged.
quick too was I to comfort and agree to terms,
though quietly bewildered at her panic
and resulting disability.
I searched for empathy, but found less than total.
it wasn’t, after all, a spider.