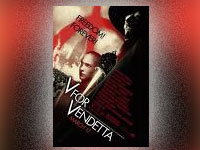 Remember, remember the fifth of November,
The gunpowder, treason and plot,
I know of no reason why the gunpowder treason
Should ever be forgot.

On the Fifth of November, 1605, Guy Fawkes, the Catholic vigilante failed in his attempt to blow up the British King and Parliament. On the Fifth of November, 2010, the man known only as “V” and masquerading as Guy Fawkes begins his year-long campaign to overthrow the totalitarian government of Britain. To the thunderous strains of Tchaikovsky’s “1812 Overture” V conducts the pyrotechnic destruction of The Old Bailey, the first movement of his orchestrated crusade to liberate the lives and minds of a society that has given away its freedom.

V for Vendetta is a creation of the Wachowski brothers (who brought us the Matrix trilogy) loosely based on the 1989 graphic novel by Alan Moore which skewered the British government and policies led by Margaret Thatcher. (Moore, however, has had his name removed from the credits of the film.) The film, deftly directed by James McTeigue, resets the story in a futuristic England ruled by Chancellor Sutler (John Hurt) who ruthlessly preserves order by any means. When V, branded as a terrorist by the government, eludes capture, Sutler snarls his justification for his own brand of terrorism: “I want this country to realize that we stand on the edge of oblivion. I want everyone to remember why they need us!”

The faceless V (Hugo Weaving) offers his own vindication for his own version of vigilante vengeance, a verdict “held as a votive not in vain”: “People should not be afraid of their governments. Governments should be afraid of their people.” V enlists Evey (Natalie Portman), whose family has been victimized by Sutler’s vicious regime, in his systematic plan to overthrow the government and to “hold accountable” those who by dehumanizing him, transformed him into a super-human idea (“Ideas are bullet-proof” he informs the final evil-doer he executes, strangling him with his gloved hands).

V for Vendetta’s iconographic visuals are as bold (and obvious) as its political moralizing. Sutler preaches from his looming Big Brother-like video pulpit, and V sermonizes while he plots and executes the malefactors he has tried in the balances and found wanting. Unlike V, the film wears no masks as it parades before us an unflinching and impudent commentary on recent history, the current world scene, and political leadership. From one of V’s homilies: “Violence can be used for good…. A building is a symbol, as is the act of destroying it. Symbols are given power by people. A symbol, in and of itself is powerless, but with enough people behind it, blowing up a building can change the world.” Symbols are as vital to the style of the film as they are to its message, and the disturbing connection between the film’s symbols of power and still-incomprehensible horror of 9-11 is unmistakable.

At the center of the film, between Sutler and V each playing God, Evey struggles to find herself and discover if there is an idea or a truth, larger than herself, to which she can commit herself. Whom should she trust; what should she fear? V believes that “there are no coincidences, only the illusion of coincidence.” He means that each person must act willfully and not play the victim. On that basis he holds Sutler and all those who brutalized him responsible for their actions—they cannot excuse their actions by appealing to their good intentions or the crisis of history. He holds God similarly accountable for the way things are: “I, like God, do not play with dice and do not believe in coincidence.”

The film is a thrilling, swash-buckling, sensational political rant against an Orwellian caricature of all that’s evil in the world—of the bureaucracies of state, religion, and corporate greed; of the fascist abuse of power that subjugates art and sexuality. But the irony is that it is no mere idea that overthrows totalitarianism and oppression—it is the actions of humans who use power for their own ends that accomplish these things.

“Is V a terrorist leader or a freedom fighter? Or merely a poor, wronged soul, out for vengeance?” (Jason Korsner, UK Screen). The brothers Wachowski do not answer that question for us. But about this they are unambiguous: we must not be passive or uninformed about the evil and injustice that is a pervasive presence in the world. Their hope is in the power of truth and ideas, and it is this hope that launches the film with Evey’s narration: “I’ve witnessed first hand the power of ideas; I’ve seen people kill in the name of them, and die defending them… but you cannot kiss an idea, cannot touch it, or hold it…. Ideas do not bleed; they do not feel pain; they do not love…. And it is not an idea that I miss; it is a man…. A man that made me remember the Fifth of November. A man that I will never forget.”

The faceless and impersonal relentlessness of V, in the end, cannot mask the reality that it is human to act, to believe, to hope, and to fight. V is a man, he is a human, and he loves.

1. What was your first impression of the film? Why do you think you responded as you did? 2. In few films is the lead character faceless as V is here. How did this effect your experience as a film viewer? 3. In what ways were the techniques of film-making (casting, direction, lighting, script, music, sets, action, cinematography, editing, etc.) used to get the film=s message(s) across, or to make the message plausible or compelling? In what ways were they ineffective or misused? 4. Would you have picked up on the implicit political message(s) of V for Vendetta without reading Froehlich’s review? 5. Was V a terrorist or a freedom fighter? Why? To what extent can you appreciate the perspective of someone who believes differently? Is it possible to find common ground between the two perspectives so that true conversation and understanding can unfold? 6. Froehlich states that though the film makers leave much in the air, “about this they are unambiguous: we must not be passive or uninformed about the evil and injustice that is a pervasive presence in the world.” Do you agree? To what extent do you tend to be passive or uninformed? Why? What plans should you make? 7. One accusation that can be brought against the Church is that in the past she has sided with powerful oppressors rather than with the powerless oppressed. (One example is the scandalous support of slavery provided by theologians and pastors prior to the American Civil War.) To what extent can that accusation be legitimately made today? 8. With whom do you identify in V for Vendetta? With whom are we meant to identify? How do you know? 9. Identify the various manifestations of oppression under which people suffer today. To which do you tend to be sensitive and concerned? With which are you involved 10. What narratives in the Scriptures involve personal, political, judicial, or economic oppression? What texts address power and its rightful/wrongful use? What is God’s concern in such issues? Why is it that most evangelicals who claim to hold a high view of Scripture rarely raise these concerns in their political involvement? Questions written by Denis Haack