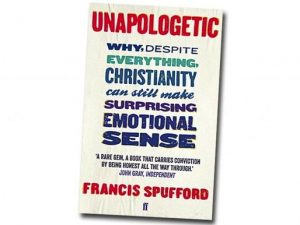 Unapologetic Feelings
We come to the books we read by various roads. In the case of Unapologetic: Why Despite Everything, Christianity Can Still Make Surprising Emotional Sense, I read a positive statement about the book by Alain de Botton, whose The Architecture of Happiness I had read with great enjoyment. De Botton wrote:

As a non-Christian, indeed a committed atheist, I was worried about how I’d feel about this book but it pulled off a rare feat: making Christianity seem appealing to those who have no interest in ever being Christians. A number of Christian writers have over the past decade tried to write books defending their faith against the onslaughts of the new atheists—but they’ve generally failed. Spufford understands that the trick isn’t to try to convince the reader that Christianity is true but rather to show why it’s interesting, wise and sometimes consoling.

Soon after reading De Botton’s comments I read an account by Jeff Cook, lecturer in philosophy at the University of Northern Colorado, of a recent debate between William Lane Craig, a Christian, and Sam Harris, an atheist. The viewer noted that Craig had, in his mind, won the argument but not the audience:

…the new atheists excel on the only evangelistically-effective playing field that matters—that of human emotion and desire. Most Christian apologists conversely seem content to surrender that ground in their preference for mere rationality. This is a tragic mistake and it’s the primary reason Christian belief is diminishing, marginalized and an easy target for nighttime comedians.

Spufford would agree with Cook and this is the reason he wrote Unapologetic. His title gives it away—“[Unapologetic] is a defense of Christian emotions—of their intelligibility, of their grown-up dignity. The book is called Unapologetic because it isn’t giving an ‘apologia’, the technical term for a defense of the ideas.”

If, that is, there is a God. There may well not be. I don’t know whether there is. And neither do you, and neither does Richard bloody Dawkins, and neither does anyone. It not being, as mentioned before, a knowable item. What I do know is that, when I am lucky, when I have managed to pay attention, when for once I have hushed my noise for a little while, it can feel as if there is one. And so it makes emotional sense to proceed as if He’s there; to dare the conditional. And not timid death-fearing emotional sense, or cowering craven master-seeking sense, or censorious holier-than-thou sense, either. Hopeful sense. Realistic sense. Battered-about-but-still-trying sense. The sense recommended by our awkward star fairy, who says: don’t be careful. Don’t be surprised by any human cruelty. But don’t be afraid. Far more can be mended than you know.

Spufford is, as the quotes above demonstrate, a gifted and incisive writer. His critique of the new atheism’s pretentions can be devastating as when he demolishes the snarky London bus ad “There’s probably no God. Now stop worrying and enjoy life.” But what about the person whose life is a living hell or the one whose body is wracked by disease or degraded by addictions—the one who is not enjoying life? “So when the atheist bus comes by, and tells you that there’s probably no God, so you should stop worrying and enjoy your life, the slogan is not just bitterly inappropriate in mood. What it means, if it’s true, is that anyone who isn’t enjoying themselves is entirely on their own.”

Spufford teaches writing at Goldsmiths College, London and his writing is both provocative and winsome. The provocative side is seen, for example, in his definition of sin – “the human propensity to fuck things up,” abbreviated throughout as HPtFtU. While this may not be a definition that will be used in most church services it does function well in Spufford’s hands. The HPtFtU is provocative—but it is true, and at the level of our feelings we get smacked up the side of our heads by its reality every day, and that should cause us to ask “What’s wrong with me?” Here Spufford is on target in crafting an appeal to our emotions. The winsome part is seen in this description of the life of faith:

Early on in this I compared beginning to believe to falling in love, and the way that faith settles down in a life is also very like the way that the first dizzy-intense phase of attraction settles (if it does) into a relationship. Rapture develops into routine, a process which keeps its customary doubleness where religion is concerned. It’s both loss and gain together, with excitement dwindling and trust growing; like all human ties, it constricts at the same time it supports, ruling out other choices by the very act of being a choice. And so as with any commitment, there are times when you notice the limit on your theoretical freedom more than you feel what the attachment is giving you, and then it tends to be habit, or the awareness of a promise given, that keeps you trying. God makes an elusive lover. The unequivocal blaze of His presence may come rarely or not at all, for years and years—and in any case cannot be commanded, will not ever present itself tamely to order. He-doesn’t-exist-the-bastard may be much more your daily experience than anything even faintly rapturous. And yet, and yet. He may come at any moment, when and how you least expect it, and that somehow slightly colours every moment in the mass of moments when he doesn’t come. And grace, you come to recognize, never stops, whether you presently feel it or not.

The Christianity that Spufford presents is the merest Christianity. While he characterizes himself as a “fairly orthodox Christian,” he voices disagreement with historically orthodox teachings such as human sexuality and the existence of heaven and hell. We can agree that the HPtFtU means that as Christians we can speak and act in ways that historically have been harmful and at times cruel, but by what criteria do we decide that historic Christian teaching is wrong? What I believe that Spufford presents is a criteria that emanates from his conviction that feelings are primary over propositions—a “I’ll agree with what makes sense to me” sort of position. While this may be attractive to atheists like de Botton I question whether it is an adequate platform for our faith. But at the same time it is a welcome push toward an apologetic that engages both the mind and heart.

If you are interested: You can watch Francis Spufford speak about his book online (http://www.youtube.com/watch?v=iwEe4c2bzVo).
Copyright © 2013 Cal Boroughs

Unapologetic: Why Despite Everything, Christianity Can Still Make Surprising Emotional Sense by Francis Spufford (Faber and Faber, 2013)