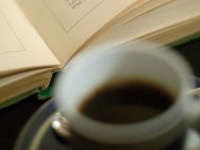 Editor’s Introduction
We have long believed that one test of being too busy is whether we have time for poetry—if not, we are too busy. Poetry resists being rushed, insisting instead that the words, phrases, lines and metaphors be savored, slowly, as if words woven together with truth and beauty really mattered. It is a pleasure to introduce Natasha Heller in her first submission to Critique.

In “A Conversation at a Diner,” Heller takes an ordinary encounter between strangers and reveals something extraordinary in the moment because even strangers reveal God’s image. And in “Jack and Jill Want to Stay Married Forever,” she transforms a classic nursery rhyme into a metaphor for the hard but noble task of building a faithful marriage in a world which fragments all it touches.

Brew a cup of tea or pour a glass of wine. Then read slowly.

A Conversation at the Diner
Natasha L. Heller

With tip your coffee comes to eighty-three dollars.
The waitress laughs out her fantasy,
apron strings biting her waist,
the stiff dough of a few babies
and long shifts close to the plate of deep-fried bits.
Bobby, the old jazz artist, whoops.
For that price you have to go home with me.
He knows how to write music with the lights cut off.
(Of his last gig, he’s said, If that man had hung up,
I’d of died.)
The waitress leans, heavy-hipped, and kind.
‘Who’s Bobby?’ my husband will want to know.
She considers her fictional answer, like the dust motes
on slow afternoons, when she’s missing her children.
I’ll say, ‘Dunno, but he gave me eighty-three bucks.’
Bobby thumbs out four extra ones, for the joke
they’ve made, commanding the place, an aging tiger.
The waitress holds the bills in her hand,
like a small bouquet, yells to the cashier,
Gonna make me a sign and put it over this booth.
‘Life sat here.’

Jack and Jill want to stay married forever.
They tell this to each set of parents,
and are received by grim grins and bitter laughs,
caused by long divorces and fights over
who should get the slimy ten gallon tank
in which to start a new fishy family,
complete with step-guppies.
The parents wish them luck, in ways that mean
I-give-those-kiddies-five-years-at-most
and Remember-when-we-were-that-foolishly-young?

So Jack and Jill start up the hill to no applause,
and a Farmer stops to give directions and
work the well, saying, The problem with carrying
empty pails is you reach the top with nothing to show.
The bucket seems too full to Jack–
when he and Jill fall, in a slosh-tangled heap
nearly back to the bottom,
he mutters, Better to fetch water once we’re there.
But the Farmer makes sure they’re filled up for the next go-round,
against their damp protests and the sounds of squelching.

At least we almost saw the view that time Jill tells Jack,
brushing her scraped knees clean of mud, their second forced landing.
I’ll admit Jack says, patting down his wet-clumped hair,
Spilling is not such a problem when your bucket is always overflowing.
They take off their shoes, no good against the mud-slicked bank,
Jill thinking of the first two barefoot gardeners,
before fruit got in the way of a perfect marriage,
and Jack, that the wetter the well ends up getting them, the better—
breaking his crown at the Farmer’s feet is getting easier every time.