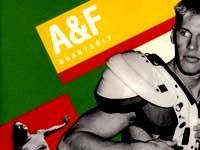 What do a naked man and woman sitting on a horse bareback have to do with selling T-shirts and shorts? Everything, if the clothes are Abercrombie & Fitch. And A&F is “way cool.” It’s the leading selling clothing brand among youth. Its products are sold in 200 U.S. stores and through its combination magazine and catalog, A&F Quarterly. On the surface, it seems that Abercrombie sells high priced sports and casual wear to preppy college students, with 1998 retail sales topping $815 million. But in reality, Abercrombie sells an Ivy League lifestyle of status, sex, and sports. “I’m from the East Side, so it’s like our style. It’s what’s cool,” explained a 19 year-old male New England shopper at a Dallas mall. “You know the West Coast is surfer stuff, the East Coast is Abercrombie.” A&F was named a “Top 100 Company” by Ad Age magazine in 1999. Though publicly claiming to target 18-23 year olds, the “Abercrombie-look” is dominating teenage style across the country. In fact, A&F is opening new stores called “Abercrombie,” with the same clothes in smaller sizes aimed at the younger teens.

What turned a failing 108-year old Cleveland based company into the hottest selling teen style was the inspiration of CEO Michael Jeffries who joined A&F in 1992. He tightened A&F’s market and shifted its emphasis from clothes to experience. A&F is an interesting case study in Christian discernment. For it serves as both a window on the nature of advertising and a mirror on the soul of American youth.

Abercrombie & Fitch is not about clothes. Or ultimately about fashion. Instead, A&F offers its buyers the experience of stepping into the fantasy world of adolescent dreams, unlimited popularity and carnal pleasures. Here the beautiful people belong.

“Consumption,” writes cultural critic James Twitchell, “is the central meaning-making act in a postmodern world.” It serves in the place of religion for most young people. And the lifestyles it promotes serve as secular religions. “Tell me what you buy and I’ll tell you who you are, and who you want to be.” What gets branded in the process of consumption is not the product, but the purchaser. We consume meaning, not A&F T-shirts or cargo pants. And the meaning we consume is not intellectual or abstract, but experiential. It’s meaning we live out. Pine and Gilmore explain in their provocative book, The Experience Economy, that our economy is based not on service or information, but on experience, where the transformation of the consumer is the ultimate product. A successful brand does not sell a product, but a lifestyle. Thus from an assortment of “brandscapes,” young people create their identities and foster their self-transformations. In a teen-oriented chat room provided by A&F, “Krista” wrote, “Abercrombie is the best thing to happen in the 90’s and I hope that they will keep their clothes in style for a long period of time. I wear Abercrombie every day of the week. I even wear it to church, so please get some church clothes in. I would like to be on one of the posters when you walk in there, so if you need a model e-mail me any time.”

This branding of identities is intentional. In A&F stores, sales people are called “Brand Representatives,” chosen to emulate the models in the popular A&F Quarterly. This A&F Look Book states, “We are selling an experience for our customer, an energized store environment creates an atmosphere that people want to experience again and again. The customer sees the natural Abercrombie style and wants to be like the Brand Representative.” CEO Jeffries compares walking into an A&F store with playing a role in a movie. “You buy into the emotional experience of a movie. And that’s what we are creating. Here I am walking into a movie, and I say, ‘What’s going to be the box office today?’” A&F sets the stage. The customer is the actor. The A&F look, then, is a personal identification with a scripted identity.

A&F does little print advertising (apparently only in Rolling Stone). Its message and brand identity has been established almost exclusively through A&F Quarterly, their 300-page R-rated magalog boasting a circulation of over 200,000. In addition to selling clothes, the publication celebrates the hedonistic, irresponsible, and irreverent world of today’s college campus where binge drinking, casual sex, and bashing traditional religion are de rigeur. In its pages semi-nude models (frequently in couples or groups) display A&F wear in hetero and homoerotic poses. In addition, readers find tips for dorm room seduction, recipes for alcoholic drinks (with names such as “Dirty Girl Scout Cookie,” “Come in With Me,” and “Foreplay,”), interviews with porn stars and drag queens, and reviews of books, CDs, and films. In the Abercrombie world there is little time for study; college is apparently about out-of-control fun with friends. Criticized as a “Playboy for teens,” the company simply—and probably accurately—answers that they are only portraying American college life realistically. And though A&F Quarterly is shrink-wrapped and only legally sold to the 18 and older crowd at Border Books, mall stores are crowded with younger teens who are well aware of its sexy content and the parental outrage that it evokes.

What are Christians to make of A&F? It sounds puritanical to boycott the leading brand of adolescent clothing. And yet to attempt to disassociate the brand from its context of cultural meaning is woefully naïve. Even Charles Colson weighed in on his radio show, Break Point, saying: “Abercrombie & Fitch markets a worldview that centers around the pursuit of erotic pleasures. The whole purpose is to appeal to teenagers who think sex is cool.” A&F is not simply after our dollars, it’s after the transformation of our hearts and sensibilities. This is “American Preppy style” at its most spiritually corrosive level of subtlety. Christians are not alarmed mainly because the commodification of life and identity is so pervasive as to be taken for granted. Consumerism has become American’s primary epistemology: our ground of being, our sense of self.

Few apprentices of Jesus would try to justify the lifestyle promoted by Abercrombie & Fitch. Here blatant sin is chic. The only recourse is to attempt to disassociate the meaning A&F attaches to its products: “I just like the style and color.” But even if this argument is granted, its broader cultural meaning still remains. And A&F is in business not to let you forget. A Christian remains, thus, guilty by association. One is still supporting and legitimating the carefully packaged message that sin is “way cool.”

The Bible does not say a great deal about how we should dress as followers of Jesus, but it does suggest some boundaries. In a culture where Americans have lost the sense of shame or reticence, Christians do well to remind themselves of these limits: “Dress modestly, with decency and propriety, avoid expensive clothes as is appropriate for [those] who profess to worship God” (1 Timothy 2:10, paraphrased). In short, we wear Sunday clothes every day. We do not dress for ourselves. We dress for God. We dress so that our outerwear does not distract from the Christ-like character Jesus is forming within us. “People wear preppy clothes just to fit in. It’s an attitude thing; everyone who looks like me is my friend. There’s a difference between dressing for oneself and dressing for God,” explains a wise 16-year-old male, reflecting on A&F.

We live in a corrupt society, where sin is called virtue and true virtue is mocked. In the 1999 Christmas issue of A&F Quarterly, opposite a picture of Santa and Mrs. Claus engaging in sadomasochistic sexuality, the A&F staff writes, “Sometimes its good to be bad.” A&F has an upside-down morality. They have exchanged the truth for a lie. Not surprisingly, perverted sexuality follows. Jesus would not aspire to be an A&F Brand Representative. He would not let chic threads undermine cosmic truth. Brand Jesus points in a different direction.