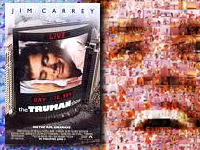 Ever since its invention, Hollywood has hated television. Whether it is the satire of television news found in Network and Broadcast News, the political satire of more recent movies like Wag the Dog or Primary Colors, or the social statement about the destruction of the family by television portrayed so poignantly in Barry Levinson’s Avalon, movies have depicted television as the “Great Satan.”

There is truth in this analysis, of course, but it may have reached its zenith in a much-ballyhooed film entitled The Truman Show. Truman Burbank is played by Jim Carrey, the quintessential “lite” actor whose career has ironically been made out of superficial comedy and television stardom. Truman is a character in a soap opera with a distinct difference: this soap is real. He is not the star of a television show, he is the television show, though he does not know it. Abandoned at birth, Truman was adopted by a television company, and his life has been the subject of a twenty-four-hour-a-day, seven-day-a-week television show ever since. Everyone he knows—friends, co-workers, clients, family, even his wife—is an actor, hired and scripted to perform a certain function in Truman’s life. He has never left his perfectly constructed coastal town of Sea Haven, a town that looks as if it is simply a gated community somewhere in Florida (which, in fact, it actually is) but is in reality the world’s largest television set, visible from space, as the TV promo proudly proclaims. Truman lives in what he considers to be a normal way, but love has broken the rules for him and makes him begin to question whether his life is all it can be. As he asks questions, particularly about his marriage and his father, and as the equipment constructed to dupe him begins to fail, he discovers the ruse that has been played on him all his life.

The Truman Show is not just an entertainment, though entertaining it is. An amazing cinematic statement about the problems of appearance and reality that so dominate post-modern thinking in the American academy today, this movie can teach us much about the desperation of current American cultural life.

The film operates on two levels. First, it acknowledges the level of the movie maker and you, the viewer. There are scenes in The Truman Show in which you see either an audience watching “The Truman Show”—the television show within the movie—or the control room from which the television show is produced, or you see Truman himself or the other actors in traditional movie-viewing mode. At these times, you watch the movie as if Truman or the others were characters in a movie, which of course they are, and your understanding is not challenged in any distinctive way.

The second level is visually more interesting. Frequently, you see what viewers of “The Truman Show” would be seeing through the 5,000 cameras set up around Sea Haven. These scenes are often set off in a clever way with camera shots containing blurred edges and strange angles so that you, the movie viewer, know when you are watching Truman in the same voyeuristic way that the audience in the movie is watching Truman. Without seeming overly obtrusive or clever, this visual perspective gives you the feeling of power, as if to tell you “You lucky viewer! Poor Truman is just a pawn in their game, but you can walk out into the night after this film is over and you are free.” This sets up Truman as simply a character in a TV show instead of a real person with independent dreams and miseries, and the implication is that all is right with the world—movies are movies, and real life is real life.

For over half the film the movie chooses not to explore this level of reality deeply; the hint, the whisper, of philosophical speculation is far more effective than the shouting of it. The director, Peter Weir (Picnic at Hanging Rock, Witness, Dead Poets Society), moves with great skill between the two levels, balancing our viewing of Truman through the camera with the “real life” perspective of the traditional movie. But in one magnificent scene everything changes and the viewer is brought right into Truman’s world and made to ask the question, “Are we also Truman, only playing in a big television show that God directs, or are we creating our own reality, truly free to pick from an infinite number of roads the path upon which we will walk?” To explain this scene would ruin the film for the reader; suffice it to say that it involves Truman and his best friend Marlon as they discuss the implications for their friendship of Truman’s theory that everything in his life is a fake.

In many other ways, the movie speaks strongly to the problems that television brings to contemporary culture. And the central problem that Weir explores is that of appearance vs. reality.

From the name of his central character—“True” “Man” “Burbank” (the center of the television industry in the world)—to critical high points of the dialog to the development of other central characters like Christof, the maniacal creator and director of “The Truman Show,” Weir moves between simple parable and worked-out allegory. The clearest put-down of television comes in the person of the producer Christof. He is the complete and omnipotent creator of Truman’s reality. At a crucial point late in the film when Christof speaks with Truman for the first time, he identifies himself by saying, “I am the creator… …of a television show,” the pregnant pause brilliant in its display of Christof’s opinion of himself. Earlier in the same sequence of scenes, Christof declares, “Cue the sun!” and later he endangers Truman’s life by creating tidal waves to swamp his boat. A television producer is the master of the universe in this film, and, while some reviewers have thought the image heavy-handed, in reality it is an incisive statement of the power television accrues to itself in our age.

Television sets are regularly on twelve to eighteen hours a day in American households. We get our news, our entertainment, and our social mores from its dramas, sitcoms, documentaries, and magazine shows. There is some evidence that with the advent of computers and the resurgence of the human need to interact—especially in a “do”-oriented society like America—that this is changing. Nevertheless, the reality is that the intellectual life of the populace of this country is far too dominated by what is aptly called the “Boob Tube.” The Truman Show takes a harsh attitude towards this dominance, but does it in an entertaining and convicting fashion. As important as the visual image must be for a healthy spiritual life, we as Christians value the Word more highly. The Truman Show is a healthy warning to us not to allow the confusion of appearance and reality that saturation with television images can bring.

Two of the most comical, and avid, viewers of “The Truman Show” throughout the film are a pair of parking lot attendees who sit in their glass cage at work, watching Truman’s life unfold before them. When the movie ends, as one inevitably knows it will, with the cessation of “The Truman Show,” they ask the most challenging question for the Christian to consider as he or she wonders about the cultural hegemony of television in our individual lives. Truman’s story finishes with a long, dramatic, moving flourish of scenes, leaving the viewer captivated and exhausted. Suddenly the two parking lot attendants appear on the screen and ask, “What else is on?”

1. What was your initial or immediate reaction to the film? Why do you think you reacted that way? What was it in the film that prompted that reaction? 2. What is the message(s) of the film, or view of life and the world that is presented in the story as it unfolds? Consider how the film addresses themes such as: the nature of reality or what is really real; what’s wrong with the world and what’s the solution; the fragmentation of life in our busy, pluralistic world; the significance and meaning of relationships and love; the significance and meaning of being human; whether there is right and wrong, and how we determine it; the meaning of life and history; and what happens at death. 3. What is attractive here? To whom? How is it made attractive? 4. Where do you agree? Where do you disagree? Why? In the areas in which we might disagree, how can we talk about and demonstrate the truth in a winsome and creative way in our pluralistic culture? 5. In what ways were the techniques of film-making (casting, direction, script, music, sets, action, cinematography, lighting, editing, etc.) used to get the film’s message(s) across, or to make the message plausible or compelling? In what ways were in ineffective or misused? 6. Most stories actually are improvisations on a few basic motifs or story-lines common to literature. What other films come to mind as you reflect on this movie? What novels or short stories? What Scriptures? 7. With whom did you identify in the film? Why? With whom were we meant to identify? Discuss each main character in the film and their significance to the story. What insight does the film give into the way postmodern people see life, meaning, and reality? How can you use the film as a useful window of insight for us to better understand our friends and neighbors who do not share our deepest convictions and values?