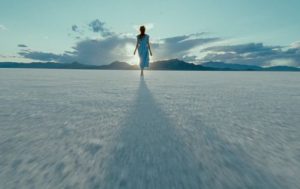 A Picture in Need of Words
Remember the old saying, “A picture is worth a thousand words?” It’s not true. Take Terrence Malick’s latest film, The Tree of Life, for example.

If you know him at all, it’s probably as the director of one or another of the five feature-length films he’s made over the last 40 years: Badlands (1973), Days of Heaven (1978), The Thin Red Line (1998), The New World (2005), and this year’s The Tree of Life. But it would be misleading to describe him as just a film director. He is a Philosopher-Who-Makes-Movies, and they are rare and wonderful creatures indeed. Malick cut his philosophical teeth as an undergrad at Harvard, then did most of the work necessary for a PhD in the subject at Oxford, but left without the degree after a disagreement with a professor about the writings of the 20th century Austrian philosopher, Ludwig Wittgenstein.

Yes, I hear you: you don’t know who Wittgenstein was, you don’t care, and what does this have to do with the movie, anyway? Patience, please.

Wittgenstein had the unusual distinction of having inspired two philosophical movements: logical positivism and ordinary language philosophy. The former is probably familiar to you, at least in its street form. LP’s think that the only questions worth asking are those that can be answered scientifically. Thus, he concluded, “Most of the propositions and questions to be found in philosophical works are not false but nonsensical.” Still Wittgenstein—unlike most of the LPs who followed him—was fascinated with those questions. They may be nonsense, but they are in his opinion a special kind of higher nonsense that cannot be conveyed in words. The problem in describing them doesn’t lie in them, but in the limits of language. Thus in one of his early works he famously wrote, “The limits of my language are the limits of my world.”

Terrence Malick isn’t content to live within those limits. In The Tree of Life he bombards us with image after image, epic in their scope and extraordinarily beautiful in appearance. Many of them will be familiar to residents of central Texas: Barton Springs Pool and Hamilton Pool make their appearance, along with Eisenhower-era Waco in all its 1950s glory. Others are less familiar, but no less stunning: the birth of the universe, the origin of life, and the survival of the fittest all parade across the screen to the accompaniment of Alexandre Desplat’s exquisite musical score.

Malick offers us two things to help tie these images together and make sense of them. First, the O’Brien family: Mom (Jessica Chastain), Dad (Brad Pitt), and their three sons. Lest we mistake this as a nostalgic recollection, the film begins with the death of one of the boys, jumps back to their childhood, and then moves forward, leaving us all to wonder when and why the tragedy will arrive. Through it all Dad—frustrated, overbearing, frightened and frightening—is the persistent threat to their happiness and security. Mom though winsome and beautiful is neither the equal of the threat Dad poses, nor strong enough to be her family’s savior.

In, around, and beneath the unfolding family drama, Malick weaves one of his trademarks: a series of voice-overs, but most spoken in whispers. It’s as if he’s saying, “There are things you need to know here, but I’m not sure I really want you to hear them.” I have to admit that his voice-overs annoy me. He’s a skillful director; can’t he stitch his story together in any other way? But perhaps he doesn’t think the story can—or should—be stitched together. Perhaps Malick agrees with Marshall McLuhan’s dictum, “The medium is the message,” i.e., how the story is told is what the story is about. Life often seems beautiful, but is apparently random and disjointed. Rarely does it make sense to us as we’d like it to. In this regard Malick’s film is certainly honest, if not encouraging.

Even so, no one, I think, can see The Tree of Life and walk away feeling that Malick doesn’t believe in beauty, the significance of human relationships, and an ultimately hopeful resolution of all our conflicts, but why he believes in them is anyone’s guess. A.O. Scott closed his review of The Tree of Life like this: “…the imagination lives by risk, including the risk of incomprehension. Do all the parts of The Tree of Life cohere? Does it all make sense? I can’t say that it does. I suspect, though, that sometime between now and Judgment Day it will.”

It’s a fitting postscript to this beautiful, sprawling mess of a film, I think. One can only hope that if—before Judgment Day—life begins to make sense to Mr. Malick, he’ll be willing to talk about it.

1. What lingers in your mind after your first viewing of The Tree of Life? If images, which ones? If events, which events? If words, which words? 2. Early in The Tree of Life we hear Mrs. O’Brien in a voice-over say, “The nuns taught us there were two ways through life: the way of nature, and the way of grace. You have to choose which one you'll follow.” Discuss this quote. What do you think she meant by the way of nature? By the way of grace? 3. The Tree of Life consists of 2 parts: the larger is the unfolding story of the O’Brien family. The smaller, folded somewhat awkwardly into the larger, is the story of the origin of the universe, the origin of life, and the process of evolution. Discuss what role each story plays in Malick’s film. What relationship do the two stories have to one another? Why does Malick insert one into the other? 4. How did the music played during The Tree of Life make you feel as you watched the story? Did the pairing of music and image feel like a good pairing? Why or why not? 5. Discuss the last scene in The Tree of Life. Where does it take place? Who is there? Who is not? Were you surprised by this ending? Did it seem an appropriate ending to the story that had been told before it? 6. In your opinion, did Malick’s use of voice-overs enhance his story? Defend your answer. 7. In an interview about The Tree of Life, Malick (who doesn’t do interviews) said of his film, “Experience it like a walk in the countryside. You’ll probably be bored or have other things in mind, but perhaps you will be struck, suddenly, by a feeling, by an act, by a unique portrait of nature.” Discuss this quote. 8. What role do you think relationships play in making sense of life? In your opinion? In your opinion of Malick’s opinion? 9. One reviewer said Malick’s goal in The Tree of Life is “to shake us loose from our dependence upon linear narrative and plot.” Do you agree? Is this dependence something we should be shaken loose from? 10. If you were given the honor of dining with Malick after watching The Tree of Life and of discussing his film with him, what questions would you like to ask him?