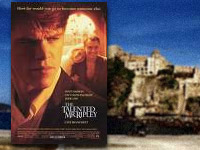 Movies are rarely about one theme as much as Anthony Minghella’s brilliant film The Talented Mr. Ripley. Deceit and the web of intrigue, cover-up, fractured relationships, and destroyed hope underlie every moment of this searching, disturbing movie.

Ripley derives its title from one of the few honest answers the lead character gives during the course of the film. Tom Ripley is asked by his friend, Dickie Greenleaf, what one talent he has. He answers without pause that he has three: “Forging signatures, telling lies, and impersonating almost anybody.” This lavish film-noir spends the rest of its time showing just how well Tom Ripley knows himself.

The Talented Mr. Ripley is the second adaptation for the screen of a highly praised novel by Patricia Highsmith of the same name. The first is the little seen Purple Noon and presents Ripley as someone dashingly attractive, a psychopath one hates to love. Damon and Minghella eschew that tact, opting instead for a character who is deeply troubled, preferring, as he puts it, to “be a fake somebody than a real nobody.” No one viewing the film could really like Tom Ripley (he is too chillingly despicable), but the genius of the character is that we are attracted to him because we fear deep down that, as the comic strip put it long ago, “We have met the enemy, and he is us.”

Set in 1950’s Italy, the movie’s action takes place mostly in the sun-drenched waters of the Adriatic Sea and the romantic alleyways and apartments of cities like Rome and Venice. A tone of soulless waste permeates the film, as the young, “restless ones” spend their parents’ money lying on the beach by day and frequenting jazz bars by night. Minghella used the atmosphere created by both the heat of the Mediterranean out-of-doors and the opulence of European formal parties to create similar effects in his Academy Award winning giant The English Patient. In that movie, neither place could overcome the two lead characters morally, but here the empty, icy heart of Tom Ripley yearns for this “good” life. The viewer knows that this way lies only trouble.

Ripley is in Europe at the behest of Mr. Herbert Greenleaf, a wealthy shipping magnate played ably by James Rebhorn, to find his son and convince him to come home. Instead, Ripley joins Dickie and his girlfriend Marge in a ruse to live off Daddy’s money. The movie follows Ripley as one vicious act after another changes his romantic dream into a terrible, bloody nightmare.

The plot of Ripley leaves something to be desired, but the filmmaker uses masterful techniques to create one of the most disquieting thrillers of recent memory. From the beginning, when the credits are shown during a sequence spotted by jagged, angular wipes (reminiscent of the opening credits of Psycho), to the closing shot of a lone figure in a mirror as the door to which it is attached slowly closes, Minghella uses the camera to spike the theme of deceit and its consequences at every turn. Early shots half-obscure Damon’s face with corners of walls, doorways, and table tops as he teaches himself jazz and memorizes the ways of the rich. Midway through, a dramatic zoom tracking shot at an opera, moving in on Ripley’s face as he watches a duel on-stage result in bloody death, leaves the viewer breathless as we realize that the murderous predicament he so casually fell into now has become fascinating to him. The final shots of the movie, as Ripley is left to contemplate the emptiness of his fate, are incomparably distressing, the gentle bobbing of the ship and the mirror images showing him that he will never get out of the trap he has put himself into.

The cold ease with which Damon smiles, innocent as a lamb, while he is plotting to deceive, the faultless costuming and sets which create an atmosphere of decadent, rich-kid trouble, and the polished performances by Paltrow, Law, Phillip Seymour Hoffman, Cate Blanchett, and Jack Davenport—all contribute to the viewers’ ability to live within the story. Almost against our will, we are forced to wonder time and again, “What would we do now, if we were Tom Ripley?”

Ripley, while acknowledged by the Academy, received far fewer Oscar nominations and much less box office attention than it deserved. It is interesting to speculate why. Might it hit too close to home? Could it be that we don’t want to watch a morality play that tells us that actions have consequences, that evil can be so despicable and yet come in such attractive packages, that the heart of man “is deceitful above all things?”

Late in the movie, Ripley tells a friend that the past for him is like a room in the basement where he locks the things he regrets. He laments that from time to time he meets people and “all you want to do is toss them the key, say open up, step inside, but you can’t because it’s dark and there are demons and if anybody saw how ugly it was…” The Talented Mr. Ripley demonstrates how dark (how many demons!) and how ugly that room is, and that such a house—elegant, full of rooms showing its owner to be a person of money and power—if it is built on lies and unreality, is a house of cards.

1. What was your initial or immediate reaction to the film? Why do you think you reacted that way? 2. What is the message(s) of the film? Where do you agree and disagree? Why? In the areas in which you disagree, how can you talk about and demonstrate the truth in a winsome and creative way? 3. In what ways were the techniques of film-making (casting, direction, script, music, sets, action, cinematography, editing, etc.) used to get the film’s message(s) across, or to make the message plausible or compelling? 4. With whom did you identify in the film? Why? With whom were you meant to identify? Discuss each main character in the film and their significance to the story. What insight does the film give into the way postmodern people see life, meaning, and reality? How can you use the film as a useful window of insight to better understand your non-Christian friends and neighbors? 5. Might the film be a useful point of contact for discussion with non-Christians? What plans should you make?