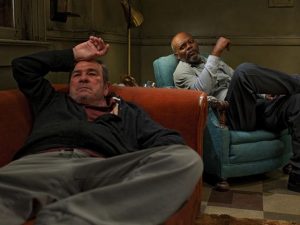 I admit it: Cormac McCarthy fascinates me. In the seven years since I stumbled across No Country For Old Men in an airport bookstore, I’ve savored every morsel of his writing, including his ten novels, two plays, and one screenplay. Three of his novels – All the Pretty Horses, No Country, and The Road—have made it to the screen so far, and both of his plays, albeit only on TV. Last year’s HBO production of his play The Sunset Limited is the subject of this review.

There are but two characters in TSL: Black, a poorly educated ex-con, played by Samuel L. Jackson, and White, a university professor played by Tommy Lee Jones. The play begins just after Black rescued White, who tried to commit suicide by throwing himself in front of a commuter train. Black takes White home to his shabby apartment, and the two spend the next hour and a half debating the meaning of life.

Black is a believer and argues simply but eloquently for the gospel. His approach to evangelism is the one I was taught years ago in the First Baptist Church of my home town: start by telling what Jesus has done for you. I’m sad to say it’s an approach that never worked well for me. At the time I felt this was due to the fact that my testimony is boring; there simply isn’t much drama in growing up white, middle-class and Baptist. Black’s story in contrast packs all the pop mine lacked. When White learns that Black has spent time in prison, he asks him to tell him a story about his time in the Big House. Black responds with a tale that my evangelism teachers would have been proud of: one day in the prison cafeteria he got into a fight with another inmate that produced two results: his salvation and permanent brain damage for his assailant. There are, of course, more details to the story than this, but trust me: you need to hear Samuel L. Jackson tell it, not me.

Unfortunately Black’s testimony isn’t any more persuasive than mine used to be. White just isn’t interested in what Jesus can do to improve his quality of life; offers of eternal life make him shudder. You see, existence itself is The Problem in his eyes. Is he an atheist? Sure, but that’s not why he tried to commit suicide. White’s dilemma is the Dilemma of the Secular Existentialist. On one hand, life is whatever you make of it, and you are free to do with it as you will. On the other, life is whatever you make of it, and if despite your best efforts, it doesn’t turn out well, why not end it all? Indeed, in his opinion this is the only honest choice available to anyone. In his words, “If people could see the world for what it truly is, see their lives for what they truly are without dreams and illusions, I don’t believe they could offer the first reason why they should not elect to die as soon as possible.”

Cormac McCarthy is a master at writing dialogue and it is the richness of his dialogue even more than the strength of his characters that carries TSL. If the idea of listening to an hour and a half of conversation sounds boring to you, think again. Conversation this good is rare, and if I had McCarthy writing my dialogues for me, I’d never tire of talking to anyone. Still like good food, dialogue this rich should be digested slowly, if at all possible. So if you have the time and the inclination, please get a copy of the play and read it before watching the movie. It’ll set the stage (no pun intended) for what follows. And if you’ve already read the play, please watch the film, too. Remember what it was like to read Shakespeare the first time? The beauty of the words, getting to know the characters, the delight of the story? It was good, wasn’t it? And then remember what it was like to see <i?Much Ado About Nothing performed well, by real artists. If nothing else it brought home the simple fact that plays were meant to be performed, not just read. TSL is at its heart a play about whether or not life is worth living, and while you can learn a lot about Cormac McCarthy’s answers to that question by reading it, you’ll learn even more by watching.

The tagline on The Sunset Limited DVD reads, “Nothing is ever black or white.” I imagine it’s the product of an ad exec’s imagination rather than McCarthy’s for the predominant shades in all his work are back and white. He sees the world, rightly, as a world of sharp contrasts. Either we make choices and are responsible or our lives are ruled by fate. Either evil is real or all our tragedies are pointless. Either life is worth living or it isn’t. What’s hard to find amidst his blacks and whites is a clue to which he thinks is so.

I’ve read lots of reviews of the play and the movie. I’ve read the play out loud with friends, watched the film with them, and spent hours discussing both, and in our discussions I’ve noticed a consistent pattern. Believers think, “Our guy won. His arguments were better. He carried the day.” Secularists think the same things, but about White, not Black. I think that The Sunset Limited is a carefully balanced presentation of what McCarthy considers some of the best arguments each side has to offer. If so, in his mind it’s a tossup in the end. You make your choice and you place your bets. Everything is riding on your bet, but you can’t know if your bet was a good one until it’s too late. If I’m right, then The Sunset Limited begs an important question: not the one I started this review with–“To be or not to be”– but rather Pontius Pilate’s question to Jesus in John 18– “What is truth?”

And as Hamlet also said, “There’s the rub.” Living well without answers—the American Way– is a comfortable make-believe. As Dick Keyes once memorably put it, it’s like sailing first class on the Titanic: we go out in style. But having good answers that can’t be lived is no better. A belief in God that doesn’t translate into hope that existence has not always been and will not always be hell just isn’t attractive to White or anyone else I know. Fortunately the gospel according to Jesus does just that, even if the gospel according to Cormac McCarthy does not.

1. What are you thinking about as The Sunset Limited ends? First impressions are what we’re after here, not considered opinions. Spit out what’s on your mind without pausing too long to consider why it’s there. 2. One of the first images in TSL is the locked door of Black’s apartment. It’s an image that the director returns to more than once during the play. Why? What idea or feeling is reinforced by its repetition? 3. Early in their discussion Black tells White, “Belief ain’t like unbelief. If you're a believer and you finally got to come to the well of belief itself, then you ain’t got to look no further. There ain’t no further. But the unbeliever’s got a problem. He's set out to unravel the world. For everything he can point to that ain’t true, he leaves two false things laying there.” Discuss this quote. What is Black arguing here? Do you agree with him? 4. White saves one of his best points for late in the play, when he tells Black, “And brotherhood, justice, eternal life? Good God man... Show me a religion that prepares one for nothingness, for death. That's a church I might enter. Yours prepares one only for more life, for dreams and illusions and lies. Banish the fear of death from men's hearts and they wouldn't live a day. Who would want this nightmare but for fear of the next. The shadow of the axe hangs over every joy. Every road ends in death, every friendship, every love. Torment, lost, betrayal, pain, suffering, age, indignity, hideous lingering illness... and all of it with a single conclusion. For you and everyone and everything you have ever chosen to care for.” Discuss this quote. What makes this this perspective attractive? In your opinion why does White want to persuade Black that this is so? 5. If you were in Black’s position, how might you have handled the encounter with White differently? At what points in the conversation would you have tried to take it in a different direction than Back did? Why? 6. Same questions as #5, but from White’s perspective. How might you have argued his case better than he did? 7. In several recent interviews Tommy Lee Jones said that The Sunset Limited reminds him of a Flannery O’Connor quote: “Faith is what someone knows to be true whether they believe it or not.” Discuss this quote and why in your opinion Mr. Jones ties it to The Sunset Limited. 8. In your opinion who wins the argument between Black and White? Justify your answer. 9. The last image in TSL is, quite conspicuously and deliberately, a sunrise. What did it signify to you? Why do you think the director calls our attention to it?