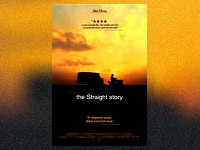 Alvin Straight is in his seventies and lives in Iowa with his daughter, Rose. Rose is the only family he knows except Lyle, his estranged brother of ten years. When Alvin receives a call that Lyle has had a stroke, he decides to visit Lyle, who lives in Wisconsin, and the decision he makes, to travel via lawnmower, commands the attention and sympathies of everyone he meets in The Straight Story.

1. What is the purpose of the overhead shots and the rest of the cinematography? 2. How did you respond to the film’s sparsity of “action”? Do you think there is any significance to names in the film? 3. The doctor tells Alvin , “If you don’t make some changes quickly, there will be some serious consequences;” even though Lyle’s had a stroke, it seems that Alvin is more-at-risk in the film. Why does Alvin decide to risk the consequences, and for whom did Alvin make the journey? 4. Why doesn’t Alvin make the changes the doctor recommends? Do you sympathize with Alvin’s decision? 5. What did you want him to do? What would you do in the same situation? What does your answer reveal about your understanding of the quality of life? 6. How do props and setting reflect Alvin’s condition throughout the film? 7. Is the music used effectively? 8. How do you understand the harvesting symbolism throughout the film? Do you think it’s intentional? 9. What does Alvin give to people he meets along the way? 10. At the fireside, Alvin offers the illustration of the bundle of sticks as a family. Why do you think the girl was afraid to face her family? Why do you think it’s so hard to trust the people we’re closest to? 11. At the bike camp, Alvin says, “The worst part of being old is remembering when you was young.” What does this mean regarding the way we treat the old in our society, especially as we seek to care for them? 12. Why is Alvin so intent on finishing the way he started? 13. Throughout the film, especially at the campfire and in the bar scene, we see people confessing things they’ve never told anyone. What was it about these situations that caused people to open up? And what does this say regarding the power of confession? Why do we feel the need to confess our failures to people? 14. Why, do you think, Alvin ordered a beer at the gas station? 15. Why did the filmwriter have Alvin’s mower break down so close to Lyle’s place? 16. Why does Alvin keep telling people that he’s heading to Lyle’s house? 17. What was your reaction to the ending of the film? Why was it left this way?