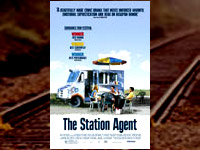 Fin, a man born with dwarfism, inherits an abandoned train depot in a rural town after the death of a friend and co-worker. Instead of finding solitude, which he initially longs for, he finds an artist struggling with a failing marriage and an infectiously lovable hot dog and coffee vendor who won’t leave him alone. What he finds in these two is that grief and sorrow require company for healing, even if the company is the last kind one would expect or hope for.

1. How did you feel as the credits began to roll, and why? Especially regarding the ending, what does this say about the film-making? 2. What was your initial reaction to Fin, and why? Did you find yourself in conflict between what you felt and what you thought you should feel? If so, why? 3. Early in the film, we see Fin’s reliance on his timepiece, his predictably formal dress, and his apparent commitment to think before he speaks. Do you think he was always this way? Why or why not? How, and what, are things like the pocket watch used to communicate about Fin? 4. Beginning with Fin and Henry, there are several bar scenes in the film. What might be the reason for choosing a bar rather than, say, a restaurant or country club? 5. Did you find your reaction to Fin’s evasiveness changing through the film? Were there any specific moments that this happened, and if so, why? 6. Why do you think Fin wanted so badly to be left alone? Do you think that a wise decision? In general, why do you think people who are grieving want to be left alone, and is that the best thing? 7. At several points, like when Olivia offers to check a book out for Fin at the library, Fin refuses favors from people. Why? 8. What role(s) does Joe play? How do you feel about him as a character? How does he keep from being annoying to you as a viewer (if he does)? 9. Emily is the first person Fin is willing to be direct with. Why? 10. What significance does the “right of way” play? During the train-chasing scene, we see, for the first (and maybe the only) time, Fin completely unguarded. Why do you think this is the case? 11. Why do you think Olivia is attracted to Fin? 12. What do you think is ultimately responsible for the changes in the way Olivia, Fin, and Joe relate to each other? What do you think causes the drastic change in Olivia toward Fin and Joe? 13. How did you respond when Fin wouldn’t leave Olivia alone, the way Joe wouldn’t leave Fin alone earlier? 14. In the film, cellphones, which represent connection, are always intrusions. What is the writer suggesting? What should be the basis for human connection? For “community?” 15. What is the importance of the “station agent”? What was the cause of Fin’s eruption at the bar? Why was this scene important for the film? Do you think that satisfied Fin in any way? If not, what else is required? Why do you think Fin finally agreed to go to Olivia’s school? 16. Do you think the ending was appropriate? Why was it chosen (it wasn’t the original ending)? 17. One of the deleted scenes shows Henry’s funeral, where a poem is read, which ends by saying that we should not be awed by man, but by “God, who made the man.” Is this an appropriate thing to say? Are there different obstacles to belief for those with physical “abnormalities,” at least by cultural standards, whether “defects” or aesthetics? 18. When we get involved in other people’s lives, according to this film, we invite risk (emotional pain, e.g.), but the film suggests that the bigger risk is not getting involved. How does the film do this, and do you agree? What applications does this film have for believers?