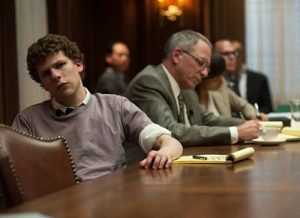 At the end of their 1979 ode-to-nihilism album entitle The Wall, Pink Floyd –after dismissing most of the things we turn to for comfort—school, work, love, sex, politics—as “just another brick in the wall,” gave themselves an out in the album’s last cut, “Outside the Wall”:

All alone, or in twos
The ones who really love you
Walk up and down outside the wall
Some hand in hand
Some gathering together in bands
The bleeding hearts and the artists
Make their stand
And when they’ve given you their all
Some stagger and fall after all it’s not easy
banging your heart against some mad bugger’s wall.

Yes, I’m afraid even mainstream nihilists cannot be trusted; they need something to live for as much as the rest of us do. And what better refuge from the pointlessness of it all than humanity itself? Whatever else may happen to disappoint you, there will always be someone to love you, someone you can trust, someone to rely on. Or will there be?

In perhaps the best made of last year’s films, The Social Network turns the cynical eye of reason on the last refuge of the meaningless: human relationships. No matter what you may have heard, Aaron Sorkin’s screenplay isn’t about Mark Zuckerberg, who refused to take part in the project, nor is it about the advent of Facebook, the Internet phenomenon that, according to its devotees, has changed the world. It’s about relationships, or perhaps more precisely, what relationships are about.

I’m not suggesting that reason per se is inherently cynical. Most Americans would benefit greatly from a little disciplined thought about themselves and the world they live in. Thinking doesn’t produce cynicism; failing to think clearly does. But when the cynic turns reason towards relationships, his conclusions are predictable.

Relationships are about sex
In his book Accidental Billionaires, on which The Social Network is based, Ben Mezrich writes, “The impetus of everything in college, I think, is to get laid… I know that was my whole purpose in becoming a writer.” I don’t know Mark Zuckerberg; perhaps he and Ben Mezrich are really alike at this point, or perhaps Mezrich is guilty of creating the film’s Zuckerberg in his own image. Either way, sex is the cheapest commodity that is traded in The Social Network, and thus, the most easily obtained.

Relationships are about social standing
Crowds and music are a sure sign in The Social Network that an important conversation is going on. If like me, those are just the sort of circumstances in which you have a hard time understanding words, be sure to add subtitles to your viewing. This is never more important than in the film’s first and most painful scene. Mark and his girlfriend Erica are having a DTR—Define The Relationship—talk you shouldn’t miss. It’s quickly evident to everyone but Mark that it isn’t going to end well.

Mark: “I want to try to be straightforward with you and tell you that I think you might want to be a little more supportive. If I get in [to the Phoenix Club, an elite Harvard social club] I will be taking you to the events, and the gatherings, and you’ll be meeting a lot of people you wouldn’t ordinarily meet.”
Erica: “You would do that for me?”

Remember Erica’s line, because Mark will repeat it (whether consciously or not, I can’t tell) at another turning point in the film.

Does Mark need Erica? Sure, but in his mind he needs to be seen with her even more. He’s like the eccentric who buys a Van Gogh, not because he loves it, but because others will look at him differently because he owns a Van Gogh. He’s the ultimate nerd: brilliant, needy, awkward, inspiring sympathy and loathing in equal measure. That Facebook is born from the tension between his needs and his ineptitude is at the same time his salvation and his tragedy.

Relationships are about money
Or not. Angus Wall and Kirk Baxter won a well-deserved Oscar for their seamless melding of The Social Network’s two story lines: the Story of Mark and Facebook, and the Story of the Lawsuits filed in the wake of Facebook’s success by two of his former classmates, Cameron and Tyler Winkelvoss, who accuse him of stealing the idea for Facebook from them, and by his best friend, Eduardo Saverin, co-founder of Facebook. When an opposing attorney accuses him of starting Facebook so he could gain admittance to the Phoenix club, Mark replies, “Ma’am, I know you’ve done your homework and so you know that money isn’t a big part of my life, but at the moment I could buy Mt. Auburn Street, take the Phoenix Club, and turn it into my ping-pong room.”

It’s a quote that perfectly captures a central Social Network dilemma: having money isn’t a worthy goal. That’s old school. But what money can do for you creatively, socially, relationally? That’s cool. Sean Parker, the founder of Napster, makes a brief appearance in The Social Network in the person of Justin Timberlake, and explains it like this:

Anyone who watches The Social Network and can’t relate to the pain of Mark’s failed relationships is either a liar or has led a charmed life. None of us are immune to the lure of sex, money or social standing; all of us struggle with the power they exert over us and our relationships. The cynic is right in admitting that even the best of our relationships are flawed, just as all of us are. But he’s dishonest in pretending that once we’ve seen the faults, there’s nothing left to see.

C.S. Lewis put it like this in The Four Loves:
To love at all is to be vulnerable. Love anything, and your heart will certainly be wrung and possibly broken. If you want to make sure of keeping it intact, you must give your heart to no one, not even to an animal. Wrap it carefully around with hobbies and little luxuries; avoid all entanglements; lock it up safe in the casket or coffin of your selfishness. But in that casket—safe, dark, motionless, airless—it will change. It will not be broken; it will become unbreakable, impenetrable, irredeemable.

The Social Network begins with Mark in a room full of people, talking with Erica face-to-face. It ends with Mark alone with his computer, sending her a friend request via Facebook, waiting for her reply. How do you think she answers? There’s a sad irony evident in this ending: while Facebook may allow you a “yes” here, The Social Network does not.

1. While they’re still fresh, discuss your first impressions of The Social Network. What images or dialogue from the film linger in your mind? What does it leave you thinking about? 2.One reviewer dubbed the film, Five Angry Men. Who are the angry men in the film? Why are they angry? 3. In my review I assert that The Social Network isn’t about Mark Zuckberg or Facebook; it’s about relationships. In your opinion is this a fair charge? 4. There are two central male/female relationships portrayed in The Social Network: Mark and Erica, and Eduardo and Christy. Two others—Sean and Amelia, and Mark and Alice—get less face time. Describe all four. What is it in each relationship that brings the couple together? While they’re together—and none are for very long—what is it that keeps them together? 5. Two women in The Social Network describe Mark in very different terms. Erica: “You are probably going to be a very successful computer person. But you’re going to go through life thinking that girls don't like you because you’re a nerd. And I want you to know, from the bottom of my heart, that that won’t be true. It’ll be because you’re an asshole. Marilyn: “You’re not an asshole, Mark. You’re just trying so hard to be.” Which in your opinion is closer to the mark (no pun intended) and why? Which, if either, do you think comes closer to Aaron Sorkin’s view of Mark? Defend you answer. 6. Discuss how women are portrayed in The Social Network, from Facemash to romance to legal counsel. Is The Social Network implicitly misogynist? If not how does it escape that charge? 7. Imagine you were on the jury, hearing the Winkelvosses’ lawsuit against Zuckerberg just as it’s laid out in The Social Network. How would you have ruled? Don’t base your verdict on your understanding of intellectual property law, but on your own sense of fairness. In your opinion, who deserves to win and why? 8. Same question, but different lawsuit. This time it’s Zuckerberg vs. Eduardo Saverin. 9. In a recent review Sorkin said, “This thing—social networking, and obviously Facebook is the king of that—which was meant to connect all of us and bring us closer together, I don't think it's done that. I think it's done the opposite. I think we're now by ourselves, inventing new identities, performing for each other. I think it's an insincere form of connection. But, let me quickly add that that is an opinion that has absolutely nothing to do with the movie. You can love Facebook, hate Facebook, never have heard of Facebook, be indifferent to Facebook, and that will not affect your enjoyment of the movie anymore than being a fan of bank robberies is going to affect your enjoyment of The Town.” Discuss this quote. 10. Are you on Facebook? If so, why? If not, why not?