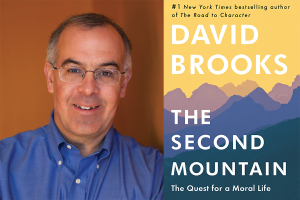 “Bless you, prison,” the Soviet dissident Aleksandr Solzhenitsyn wrote in The Gulag Archipelago. “Bless you for being in my life. For there, lying upon the rotting prison straw, I came to realize that the object of life is not prosperity as we are made to believe, but the maturity of the human soul.”

In the course of his imprisonment, Solzhenitsyn looked at the guard who treated him most cruelly. He realized that if fate had made him a prison guard instead of a prisoner, perhaps he would have been cruel, too. He came to realize that the line between good and evil passes not between tribes or nations but straight through every human heart. Prison, and the tyranny it represented, gave Solzhenitsyn a sense of participation in a larger story: “It makes me happier, more secure, to think that I do not have to plan and manage everything for myself, that I am only a sword made sharp to smite the unclean forces, an enchanted sword to cleave and disperse them. Grant, O Lord, that I may not break as I strike! Let me not fall from Thy hand!”

Many people look at these spiritual experiences with blinking disbelief: What on earth are you talking about? Many people have never had such experiences and so understandably have trouble believing in these supposedly hidden dimensions of existence you can’t actually provide any evidence of. And, frankly, there are good reasons to mistrust these experiences. Maybe they are just the product of some cocktail of brain chemicals, some hallucination, an altered state caused by weariness or stress. In that case they are certainly not something to base your life around.

Believers, on the other hand, look at atheists with the same blinking disbelief. As Christian Wiman writes in My Bright Abyss,

Really? You have never felt overwhelmed by, and in some way inadequate to, an experience in your life, have never felt something in yourself staking a claim beyond your self, some wordless mystery straining through words to reach you? Never? Religion is not made of these moments; religion is the means of making these moments part of your life rather than merely radical intrusions so foreign and perhaps even fearsome that you can’t even acknowledge their existence afterward. Religion is what you do with these moments of over-mastery in your life.

The universe is alive and connected, these moments tell us. There are dimensions of existence you never could have imagined before. Quantum particles inexplicably flip together, even though they are separated by vast differences of time and space. Somehow the world is alive and communicating with itself. There is some interconnecting animating force, and we are awash in that force, which we with our paltry vocabulary call love.

The odd thing about these moments is that, as Wiman continues, “it is not only as if we were suddenly perceiving something in reality we had not perceived before, but as if we ourselves were being perceived.”

David Brooks is an op-ed columnist for The New York Times, a regular commentator on PBS NewsHour, and a prolific author.