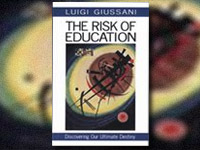 For those who consciously connect apprenticeship to Jesus with its cultural impact, there is a new form of ecumenism emerging. Among some thinkers the Reformed emphasis on cultural transformation is being fused with a Catholic sacramental vision of reality. Others are incorporating similar views into an expanded understanding of kingdom living that is both deeply spiritual and profoundly earthy.

For twenty years, the theme of “holiness in the heart of the world” has been characteristic of the Catholic Fraternity of Communion and Liberation. Begun in 1954, this lay renewal movement seeks to bring Christ into the woof and warp of everyday living. Its founder is Father Luigi Giussani, for many years a high school teacher in Milan, Italy. He is the author of more than twenty books and in 1995 won Italy’s prestigious National Catholic Culture Prize. He regularly calls modern skeptics to affirm an openness to existence, “a capacity to comprehend and affirm reality in all of its dimensions.” Reminiscent of C.S. Lewis and Francis Schaeffer, Giussani challenges modern unbelievers to allow the full weight of God’s inescapable reality to impinge on one’s beliefs and loves.

This Catholic thinker remains largely unknown within Protestant circles. But his latest book, The Risk of Education: Discovering Our Ultimate Destiny, warrants a wider readership. The book is a provocative study of Christian education and spiritual formation. For Monsignor Giussani there is no reality apart from Christ—a fact that must be understood existentially and verified personally. This, he argues, is the core mission of education.

In contrast, what is offered today as Christian education in many churches and schools is woefully ineffective. Both Christian and secular polls show there is no measurable statistical difference in behavior between teenagers who attend these programs and those who do not. Giussani suggests a possible remedy; thus it’s important for youth ministers and Christian educators to familiarize themselves with his work. He writes, “Only a faith arising from life experience and confirmed by it (and, therefore, relevant to life’s needs) could be sufficiently strong to survive in a world where everything points in the opposite direction.”

Total Meaning of Reality
“To educate,” Giussani writes, “means to help the human soul enter into the totality of the real.” Genuine education must face the deeper “why” questions. There can be no complete understanding of reality that doesn’t also address meaning. As one high school student observed, “They make us study a great number of things, but they don’t help us to understand their meaning, and so we don’t know why we have to study.” An education filled with “whats” without “whys” is an education in practical nihilism. The most common adolescent response to such an education in meaninglessness is fanatical single-issue activism or casual nothing-matters indifference.

Giussani believes that conscientious spiritual formation by Christian parents is routinely undermined by their choice of secular schools. “The status of the family as an educator is particularly reflected in the collaborators they choose for their children’s education. It is surprising to watch the common spectacle of families who, after teaching specific beliefs for years, don’t worry about the way in which their children will test them out during adolescence. In this way, they unwittingly but nonetheless disastrously allow the ‘neutral,’ secular school to continue unhampered its work of destruction and disorientation. I would like to stress that a secular school does not just threaten certain values; more radically, it threatens the integrity of the student’s soul, his vital energy, and any conception of life in which his family has educated him.”

Explanatory Hypothesis
All education begins with an explanatory hypothesis. Learned from parents and peers, every person begins with a set of assumptions about reality. At first these assumptions are held without question. But for convictions to become one’s own and to grow into adult maturity, it is necessary that these initial assumptions become a problem. This is the most strategic period for Christian education.

However, in our postmodern society many young people grow up without a given tradition or starting point. These adolescents start processing life in a void. Life for them is a series of negations: nothing is true, nothing is stable. Consequent-ly, nothing matters. From such beginnings, a teenager’s psychological and spiritual development is intrinsically harmed. “Today, more than ever, society is the sovereign educator or perhaps more correctly, mis-educator. In this climate, the educational crisis appears first as a lack of awareness.”

True learning requires a point of departure, a hypothesis with which to compare new ideas. Such is the marked advantage of children raised in genuinely Christian homes. Here a given tradition is the starting point for the child’s intellectual and psychological development.

Present Personal Authority
However, a young adult is incapable of moving from tradition to conviction without the help of a teacher or guide. Father Giussani writes, “Psychologically, a genuine dependence on a total meaning of reality requires that the student not engage in the verification process alone, as an independent ‘abstract’ undertaking: he must do it in community.” This is precisely the kind of community that is impossible in secular schools where pluralism and the assumptions of neutrality undermine a unified worldview. Secular schools affirm fragmentation and subjectivism.

In contrast, Giussani argues that the present, personal authority of a teacher is indispensable in Christian education. It is the educator who embodies and makes the explanatory hypothesis real. “The educational role of a person with true authority is first of all one of coherence: a continual reminder of ultimate values and of our commitment to them, a steady standard for judging all of reality, and a stable safeguard of the constantly renewed link between the student’s shifting attitudes and the ultimate, total sense of reality.” All true education necessitates the embodied presence of a teacher who consistently lives the ideal. Education is incarnational at its core. Giussani explains, “To educate means to offer a proposal, this proposal will reach the student’s heart and move him only if it is carried by an energy originating from the presence of the educator.”

Personal Verification
The student must undertake a process of personal verification. “Even a clear presentation of the meaning of things and the real, intense authority of the educator is insufficient to meet the needs of the adolescent. He must instead be stimulated to personally confront his own origin. This means that the student must verify the traditional contents being offered to him, which can be done only if he himself takes the initiative: no one else can do it for him.” True Christian education must be more than indoctrination. To teach is to encounter the power of the imago dei—the other as a self-determining spiritual being. The student must be free to establish his or her convictions. Particularly in Christian schools, students must be allowed to challenge, raise questions, and express uncertainty. Teachers must work to respect the process and create a safe environment for critical inquiry. True convictions that will stand up under life’s pressures cannot be fostered in any other way.

Risk of Freedom
Giving the student freedom to question involves taking a risk. The spiritual moorings of a life are finally at stake. Students can be programmed to give the “spiritually correct” responses. They can tell parents, youth leaders, and Christian educators what they want to hear. But such students, if biblical truth is not also their own settled conviction, will fail life—the bigger test.

In the end, Christian education is not about information transfer as much as life transformation. “The purpose of education is to fashion a new human being: for this reason, the active factors of the education process must guide the pupil to act with increasing independence and to face the world around him on his own. To do this, we must increasingly expose him to all the elements of his environment, while gradually allowing him more responsibility for his choices.” In the end, reality is the best teacher. Reality reveals what the student actually believes. It also reveals whether what they believe is true. It is only as the teacher steps back that out of the shadows the Truth, by which the teacher is inspired, assumes his place.

Monsignor Luigi Giussani offers Christian educators a pedagogy that serves to confront the student’s heart with the total meaning of reality. “To educate means to help the human soul enter into the totality of the real.” In the end we want real truth, real convictions, real living. It’s quite a challenge for a parent or an educator, but nothing less will do.

As I write these words, I have six weeks left to teach my high school seniors. Soon they will leave my apologetics classroom to face academic secularity and college social life. Have I done my job well? Are they ready? No one feels the risk of education more than Christian teachers who watch their students accept high school diplomas. It is then that we remember the words of John the Baptist, “He must increase, and I must decrease.”