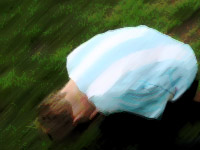 The First Stage: Energy
I always say that I became a Christian on September 13, 1981, at the end of my first week as a freshman in high school. I had gone through other conversion-like experiences before. I remember “going forward” at a couple different events when I was a kid, and a week or so before September 13, I cried to God to help me out of bad trip I was having as result of pot I had smoked which was laced with something else.

I remember that day very well—the hallucinations, voices yelling in my head. It was scary, and I think I was close to losing my mind as a result of all the pot I smoked every day—as a thirteen-year-old! At the moment I screamed for God to help me, I heard a sound like a wind, and suddenly I was sane. I’ll never forget that. Within ten minutes my two good friends came to my house and I told them that I was giving up pot. But that night I was back at it.

September 13th came on a Sunday morning. I don’t remember thinking about much at all, except that I was dogged by the delusion that police helicopters were following me wherever I went. Suddenly, I concluded that when my family got home from church—I was sitting in the next to last row of a Baptist church—the police would haul me off to jail. By this time the end of the service had arrived, and the pastor was giving an altar call. He said that people who wanted to become Christians should go forward and meet a counselor. I don’t remember feeling compelled to do that, and I didn’t stand when the congregation was told to do so by the music minister. I just sat in my seat and prayed. And then the same thing happened to me that a lot of people in similar circumstances have said happened to them. I felt as if a huge weight fell off my shoulders, as if heavy chains fell from me.

I don’t remember much of what happened immediately after that, but there is no question that I had become a different person. My friends could tell that I had changed, and slowly but surely they began to pull away from me—or perhaps I pulled away from them. Certainly they got tired of listening to me preach.

This was the beginning of my Christian life. I read the Bible constantly (I preferred the King James Version, though very few people at my church used it), I witnessed constantly (in class, on the streets, at lunch), I led youth meetings (beginning in ninth grade), and I gave away about 50% of whatever money I earned. I cared about people and went out of way to show concern for people who had been rejected and to love the unlovable.

What I miss about my first years as a Christian is the passion and real concern I felt for others. But, except in terms of passion, my faith was very shallow. I was dogmatic and I thought I knew a lot more than I really did. I said some things I wish I hadn’t. Most vividly I remember telling a neighbor whose father had just died that her dad was in hell. Somehow I did this from a sense of concern. But that sense of concern wasn’t rooted in moral reflection or depth.

The Second Stage: The Wilderness
About a year after I finished high school I joined the Navy. I’ll never forget the first few minutes at basic training—we arrived from the airport late at night—and I don’t think it’s an exaggeration to say that I’ve been disoriented ever since. Previously my spiritual life had been so strong because I had developed good spiritual habits and was an active member of a strong church. Now I had little control over my life. I was yelled at for reading the Bible in the morning before reveille and the chaplains were strangers who came and went.

My four years in the Navy comprised 48 months of unbroken depression. I hated it intensely from the first moment. I was impressed by only one chaplain, but I never spoke with him personally. I continued to read the Bible most days (now more in French than in English—I began to teach myself French after I got out of boot camp), but I rarely went to church. Of a ship of 5,000, I can remember just one guy who was an open Christian, and he was on the ship for just one six-month cruise.

Yet I now say that joining the Navy was the best thing I ever did. And even at the time I realized that what I was experiencing would be important to my spiritual life down the road. I came to think of my enlistment as “wilderness years.” How was it that the deep, relentless misery I experienced could have been so useful in the long run?

For one thing, I realized soon after I arrived at boot camp that there was no way I would re-enlist in the Navy. So I became very motivated; I wanted to begin preparing for my post-Navy life immediately. As soon as I was out of tech school I started taking college classes and reading voraciously. This was the beginning of my education.

For another, I needed to learn that a lot of the clichés I had promoted as a kid didn’t really pan out in the real world. Jesus was with me through the Navy years, but I experienced little peace or joy in them. And I saw for the first time, when overseas, that there really is such a thing as undeserved suffering. I had grown up in a very violent neighborhood and personally knew three guys who were murdered—but that was just the justice of the streets. They were punks and they got what they gave. And, really, the whole neighborhood was a disaster because the people who lived there made it that way. This was very easy to understand, and it explains why I joined the military in the first place: it was only ticket I had out of that neighborhood.

But, even after growing up in such a place, I couldn’t understand what I saw in Korea, Thailand and the Philippines where a legless boy begged for coins from drunken sailors; where young girls were trapped in brothels. What had these kids done to deserve this?

So I became a lot more reflective and less sure that I had all the answers. I became more willing to listen to other points of view, though I also became less willing to listen to obvious nonsense. And I developed a real dislike for cheap, canned answers to tough questions. This isn’t to say that I came to think that answers aren’t available; I really don’t like the “sometimes-just-asking-tough-questions-is-enough” approach that academics sometimes like to take (this is an intellectual-seeming way of avoiding actually using one’s intellect). But, in some cases, it may be that the best answer for this life is that there really isn’t one—so deal with it!

The Third Stage: Vocation
Once I got out of the Navy, I went back to my hometown and the church I had gone to before and basically picked up where I had left off. I returned to talking the way I had talked before. But I had become a different person, so I wasn’t able to keep this up for long. Now Christianity for me had a lot less to do with feelings and energy than it did with contemplation and thought.

Less than a year after I left the Navy I went to visit an Air Force friend in New Mexico. His best buddy (a fighter pilot) was dying of cancer, and he would die a few days after I left. While I was there he encouraged me to go in the direction I have gone in since then—studying, writing, and trying to be a good teacher. His encouragement was offered as one Christian to another. He was challenging me to pursue what he saw as my mission or vocation. Since he was so close to death he was thinking about the things that make a life worthwhile. This must have been one of the last conversations he had.

This encouragement was important, because the next several years were incredibly difficult. For a couple of years, I worked the graveyard shift and then went to school during the day, sleeping in my car between classes. But I took classes with Christian professors—I had sought them out—and was impressed by them, and they became role models for me.

Last summer my mother-in-law asked what I would do with my life if I could do anything I wanted. I said, “What I’m doing right now.” This isn’t to say that there aren’t a few things I wouldn’t like to change. But I think I’m doing what I was born to do. I really don’t want to do anything else. My calling is to be a teacher and to try to provide an example to students of a person who makes an effort to be thoughtful and reflective and truthful. Everything important in my life has led to this.

The way I express my Christian faith now wouldn’t have appealed to me when I was a teenager, so I’m grateful for the people who expressed their faith in a way that was attractive to a fourteen-year-old. Sometimes Christian professors can be dismissive of that kind of Christian expression, but there are all kinds of personalities in the Christian family, and I’m not sure that any one is inherently better than any other, so long as every one really seeks to be faithful to Jesus.

But in order to do what God wanted me to do, I needed to go through four years of misery (in the Navy), followed by a few very difficult years of juggling work and school. The greatest lesson I learned is that you can’t give up or cave in to laziness. Keep moving; life is short; there’s stuff to do.

My most common prayer is “Lord, help me to be a good Christian, a good husband, a good father, a good teacher and a good student.” These five things are just about all that’s important to me, and the last four things wouldn’t be possible were I not a Christian—or, at least, someone who tries to be a Christian.