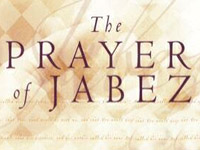 I received a heartfelt gift from a very kind student recently. You guessed it, The Prayer of Jabez. I now had this year’s second biggest story in my possession. I’m not sure I would have purchased it myself. I’m not sure I wouldn’t have. But not wanting to miss too many cultural tidal waves, I investigatively thought, “might as well read it and see what all the fuss is about. Then I could provide the one millionth review of the book for Critique.”

The first thing I noticed was how short it was. “Holy cow, only ninety-four pages. At least it won’t take long,” I reasoned. It didn’t. My administrator’s tired eyes were ecstatic. The second thing I noticed was how quick it read. This is a different issue than the length factor. It just flew by. I actually enjoyed reading the stories of “successful” answers to the now-famous prayer of our previously obscure Old Testament Israelite. The last thing I noticed was how confused I was after I finished. “What was all the fuss about? Did I miss something? Was I supposed to pray the prayer at a certain point on page 62 to gain insight into the meaning of it all and expand my intellectual territory?” The whole experience seemed so harmless, so middle class, so evangelical: Find a new angle on a trusted practice, package it, market it, sell lots of it—say, seven million copies—and become famous.

The keen insight into the book and phenomena I hoped to experience and offer was more like a vapor trail, fuzzy and dissipating quickly. Just when I thought I had absolutely nothing to add to the torrent of comments, I realized that something unexpected had happened since I read the book. As I’ve conversed with students and friends about Jabez, two things usually happen: First, someone makes a snide, sarcastic remark like, “Have you prayed the Jabez prayer today so that you’re not ‘left behind’ when God showers His unclaimed blessings on His people? Ha Ha.” Real clever, huh? Thank goodness I’ve said this only fourteen or fifteen times. Second, and much more edifyingly important, we talk about prayer, and Jesus’ prayer instruction, and Paul’s prayers, and Habakkuk’s prayer, and God’s faithfulness, and our dependence on God…and you get the idea.

Perhaps the point is that God allowed Bruce Wilkinson to discover the prayer thirty years ago, pray it each day, realize His “blessings,” write the book, and move my gracious student to give it to me so He could get my attention (and yours) about His amazing desire to hear my petitions, pleas, and praises?? Maybe the irony is that Wilkinson is more right than he realizes about God’s impossible (according to our reasoning) preference for intimacy with His children. Perhaps we who pride ourselves on our ability to sniff out every shallow attempt to harness some spiritual discipline for personal gain should critique, yes, but also allow the Lord to teach us through those we do not hold in highest theological esteem—hold on, I’m talking about Jabez.

Yes, the book’s implied and overt understanding of God’s blessing is too materialistic and temporally oriented. However, Wilkinson’s probable mishandling of the prayer does not negate the Scripture’s report that God “granted [Jabez’] request.” Had Jabez earned God’s favor with his prayer to escape the pain that his Hebrew name implied? After all, it wasn’t his fault he received such an unfortunate, future-limiting name from his mother who bore him apparently in more pain than the Genesis 3 curse promised. Could he escape his inevitable lot by gaining God’s attention and pardon through his exemplary prayers and honorable treatment of others? Was this some cosmic slip up on God’s end of the covenantal agreement that someone could perform his way out of sin and not need His grace?

According to the context of 1 Chronicles 4, Jabez was a member of Judah’s clan. The one that produced the Messiah. We don’t know much about Jabez but we do know quite a bit more about his descendant. He came because none of his ancestors individually or collectively could possibly uphold the covenant between God and His people. He came because none of them could satisfy the requirement for an ultimate blood sacrifice that would atone for the sin of the people and restore the relationship between God and His creation. He came because, as always, God is the rescuer, keeper, and fulfiller of the covenant of redemption.

God’s gospel according to Moses in Deuteronomy puts it this way, “After you enter the promised land, you might say to yourself, ‘My power and the strength of my hands has produced this wealth, these fine houses, large flocks, and treasures for me.’ But remember the Lord your God, who brought you out of Egypt, led you through the desert, gave you manna, water, clothes that did not wear out, feet that did not swell, and the ability to produce any wealth. Remember the Lord and praise Him for He gave you the good land that He promised thus confirming His covenant.” It was never about God’s people; it was and is always about God. He is, as a colleague likes to say, always the hero.

Jabez was one in a long line of clay-footed descendants of the Master. One in the humble line of He who is King of kings and Lord of lords. He prayed a simple prayer that God heard and answered with His presence, blessing, and deliverance—just as He always does when it comes to working His perfect, good will toward His people. My advice is, don’t spend too much time debating the merits of the secondhand account of Jabez’ prayer. Read the primary source, and pray for God’s glory to be manifested however He chooses. He always answers prayer rightly, even if we don’t pray the “right” way, whatever that is.

Book Reviewed:
The Prayer of Jabez: Breaking Through to the Blessed Life by Bruce H. Wilkinson (Sisters, OR: Multnomah Publishers; 2000) 96 pp.