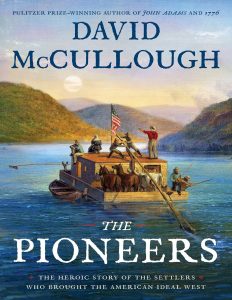 A problem in story telling

David McCullough knows how to tell a good story, and as a historian has published a series of well written and well researched books. He has penned biographies of Truman (1992) and John Adams (2001), a book on the events that unfolded in 1776 (2005), The Path Between the Seas (1977) on the building of the Panama Canal, and eight more. It’s little wonder he has won the Pulitzer Prize (twice), the National Book Award (twice) and been awarded the Presidential Medal of Freedom.

In The Pioneers (2019) McCullough tells the story of the settlers who ventured into the Northwest Territory—land previously claimed by Great Britain and acquired by America after the Revolutionary War. Located northwest of the original colonies, it included the huge tract of land that eventually became the states of Ohio, Indiana, Illinois, Michigan, Wisconsin, and the eastern tip of Minnesota.

In the settlers’ perspective, the land was not merely unsettled but uncivilized. It was heavily forested (not made productive with farms and roads), and the only people around were Native Americans who did not share the settler’s views of land ownership, government, culture or religion. Still, in the ordinance passed by Congress governing the settling of the Territory was this provision: “utmost good faith shall always be observed towards the Indians; their lands and property shall never be taken from them without their consent… they shall never be invaded or disturbed, unless in just and lawful wars authorized by Congress.” The difficulty, of course, was the unspoken assumptions behind this provision. Namely, the settler’s views of land ownership were assumed to be normative, the Native Americans were assumed to be savages in need of the settler’s civilizing influence, and any resistance by the Native Americans to the settlers’ encroachment was considered reason to bring in the army.

The settlers clearing land in the Territory were no doubt courageous. Besides facing armed resistance from the various Indian tribes, going west involved enormous economic and personal risk. Some failed and others simply could not endure the hardship that was required to flourish in such a setting. It is also true they brought with them a set of virtuous ideals: thrift, hard work, an insistence the Territory be non-slavery, the importance of education, the rule of law, honesty, the freedom of the individual, an open marketplace, a love for God and a devotion to Christianity.

As word spread about the settler’s achievements, more settlers poured in to clear yet more land, and interested visitors arrived to see for themselves. Former vice-president Aaron Burr came with a scheme of secession that came to nothing, and European travelers passed through who went on to become famous in their own right.

If there was a reality of American life that Frances Trollope, Charles Dickens, and others found most disgraceful and unacceptable, it was the removal of the native tribes to more remote reservations to the west, brought on by the members of Congress. “If the American character may be judged by their conduct in this matter,” wrote Mrs. Trollope, “they are most lamentably deficient of every feeling of honor and integrity.” It was “impossible for any mind of common honesty not to be revolted by the contradictions in their principles and practice.” [p. 230]

In a real sense America has yet to face and repent of this sin of genocide. It is a dark stain on the American story and one reason for the ongoing bitter fragmentation of our society.

McCullough is correct: the white settlers of the Northwest Territory were both heroic and sinners, and therein is the problem in telling their story truthfully. McCullough tries to tell it well, with balance and care, but every reader of The Pioneers will not agree on whether he succeeded.

I recommend The Pioneers to you—as a good read of history and as an exercise in discernment.