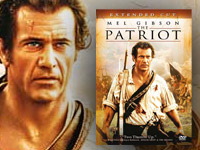 A new kind of macho superhero appeared on screens this summer, a kinder, gentler version than the Stallone/ Schwarzeneggar soldier we remember so well from First Blood or Terminator. This brave aggressor is a thinker, a father, and a man of faith as well as a warrior. While Mission Impossible 2 and The Perfect Storm demonstrate that the mindless, heartless, superficial (gee, Drew, how do you really feel about it?), special-effects, stunt movie still has big box-office appeal, Gladiator and The Patriot show that there is a place for larger-than-life characters who are virtuous heroes.

Gladiator contains heroism and leadership, the clear opposition of good vs. evil, and tender, faithful love of family. It also has the ever-present, computer-generated special effects to aid star Russell Crowe battle tigers and chariots in the arena. However, unlike movies with intentionally dumbed-down plots, Gladiator deftly involves a huge cast of characters with several sub-plots all going at once. Similarly, The Patriot centers its story around a lovable, farmer father who is called to resurrect a past expertise at war in order to preserve his family and his country. While using special effects to multiply troops in some of its huge battle scenes, Patriot uses a clear, well-written story to capture and keep its audience.

The movies do a commendable job with their history books, especially given the free and easy attitude many recent “historical” dramas demonstrate. but the historical background in each movie is there to provide the context in which the lone individual triumphs by standing for something he believes is right against overwhelming odds and constant temptation. It is this bravery, this willingness to suffer for good, that gives the movies their appeal. Both movies have their failings. Perhaps the greatest fault results from the depth with which revenge is portrayed as a motive for war. Romans 12:19-21: “Vengeance is mine; I will repay says the Lord,” would make a good study for those who doubt the wisdom of turning the other cheek. Both are simply too long and present some situations and themes too simplistically. The gore, too, in Gladiator and especially The Patriot can be overwhelming at times.

But what strength of character displayed by Maximus (Russel Crowe in Gladiator) and Colonel Benjamin Martin (Mel Gibson in The Patriot)! If you see Gladiator, enjoy its many virtuous attitudes, its pictures of true and right friendship, of bravery and of resistance to temptation. Rejoice that it shows actions have consequences, and that the accomplishment of great things only comes with self-sacrifice and suffering. Maximus is a thinker, a general who knows his men and outflanks his enemy by using his wits as well as his strength. Religiously, he is a pagan; small statues aid him in his prayers to the gods. But even here there is a bonus for twentieth century Christians for at least Maximus believes in life after death, and much of his life is lived in light of the reality of the afterlife. This is hardly a common Hollywood theme.

The Patriot is even more satisfying. While the cross as an image becomes trite through overuse, many other elements in the plot contribute to a thoroughly appropriate Christian context for the film. The church is prominent, from the place of worship where the people politic as much as they pray, to the old Spanish mission where the patriots plan their raids and hide out from the British. To have the building that most often serves as a symbol for Christianity portrayed as a place of both righteous action and useful refuge would have been triumph enough, but The Patriot goes much further. One deeply sympathetic character, for example, is a pastor who joins the South Carolina militia, declaring “A shepherd must tend his flock and, at times, fight off the wolves.” He dies heroically as well, and, perhaps most astoundingly, comes across as a quite normal person.

The most encouraging religious portrayal of all belongs to Gibson’s character. Orthodox Christianity is not perfectly portrayed in the film; the pastor’s pronouncement of marriage at Martin’s son’s wedding is a good example of political correctness. But as Hollywood films go, The Patriot shows an astounding knowledge of, and respect for orthodox Christian faith. The movie begins with a voice-over: “I have long feared that my sins would return to visit me and the cost is more than I can bear.” Throughout the film Martin demonstrates a deep knowledge of his past sin, and that knowledge contributes to a humility in everything from gentle care for his children to recognition that Cornwallis’ Achilles heel is his pride. He often prays, sometimes in a church before the cross, sometimes as a whisper in the heat of battle. Most movingly, when someone very close to him dies, he is heard to repeat over and over, “God help me, God help me” as the temptation to strike out in anger and revenge assaults him. He is a character who regularly acts in a selfless manner, who directs a godly and admirable amount of attention to his family and friends. He joins in the battle reluctantly because the taste of killing has soured in him, but he joins in the end nevertheless because he realizes it is the right thing to do.

Both men focus most of all, however, on their families. The concept of “country” is important to both, but in the end both men really fight for the sake of their wives and children. In The Patriot, the theme of family love and responsibility dominates so completely that Martin’s wavering back and forth over the question whether or not to fight becomes tiresome. Love for family is the key to Martin’s strength at every moment in the film.

Looking for some encouraging signs from Hollywood? You can’t do much better than the warrior fathers of Gladiator and The Patriot.

1. What was your initial or immediate reaction to the film? Why do you think you reacted that way? 2. What is the message(s) of the film? Where do you agree and disagree? Why? In the areas in which you disagree, how can you talk about and demonstrate the truth in a winsome and creative way? 3. In what ways were the techniques of film-making (casting, direction, script, music, sets, action, cinematography, editing, etc.) used to get the film’s message(s) across, or to make the message plausible or compelling? 4. With whom did you identify in the film? Why? With whom were you meant to identify? Discuss each main character in the film and their significance to the story. What insight does the film give into the way postmodern people see life, meaning, and reality? How can you use the film as a useful window of insight to better understand your non-Christian friends and neighbors? 5. Might the film be a useful point of contact for discussion with non-Christians? What plans should you make?