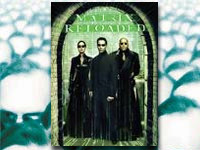 This review assumes knowledge of The Matrix, the first movie in the trilogy: The Matrix, The Matrix: Reloaded, and The Matrix: Revolutions (due out in November 2003). If you have not yet seen The Matrix, you should rent the video or DVD before reading on.

In reflecting once more on what The Matrix movies are all about, I can’t help but remember an old television ad that showed an opera singer hitting a high note that burst a wine glass. The voice-over then asked, “Is it real, or is it Memorex?” The point was to convince the audience that so little difference existed between the quality of the live voice and that of the taped voice that either might have broken the glass.

So seems the motive of The Matrix movies, at least as far along as the story has taken us. The Matrix: Reloaded opened in May 2003 to an expected thunderous box office take, and it continues the theme of perception versus reality dominant in the first movie. Andy and Larry Wachowski, the brothers who created the whole fiction and also direct the films, seem bent on making us question whether we are in a waking or a dream world. As Morpheus, one of the main characters of both movies so far, says of the Matrix, “If you were in a world of your own choosing, how would you know the dream world from the real one?” Moving back and forth between the machine-created Matrix and the human world of existence, the line between the two is constantly questioned and sometimes blurred. In the first film, Morpheus and Neo regularly doubted whether what we perceive is the world of human reality or a computer program. In this film, the doubt is extended and subtly deepened.

One of the central questions in the first film was whether or not staying in the real world of, for example, goopy mush for food was worth it since, in the Matrix world of illusion, one could enjoy steak that, though virtual, nevertheless tasted delicious. Similarly, the Matrix world has “all the comforts of home” while the real world is one of constant war with the machines who control the Matrix, a world of few comforts and many dangers. Cypher, the traitorous villain of The Matrix, decided for the Matrix world, and attempted to subvert the human project by killing Neo and giving the machines access to Zion.

This question returns in Reloaded and in many ways becomes a stronger question for the main characters. Neo encounters temptations that make him more and more deeply question his commitment to the human world. In addition, other options present themselves than simply the two of the Matrix: side with humans or with the machines? In Reloaded, Agent Smith, ironically freed from the Matrix by Neo’s having killed him, and seeking to grab power for himself, is joined by a new character, the Merovingian, who, though within the Matrix, has a measure of freedom from the control of the machines, and seeks power to control his destiny.

Both these characters are entirely within the Matrix but do not obey its rules. They are rogue computer programs who work against the machines. So are they “real” or illusory? The Merovingian’s pompous monologue about cause and effect versus free choice highlights the problem: “Choice,” he says, “is created by those with power,” telling Neo, Morpheus and Trinity that they do not really choose anything, but only experience the illusion of choice, pre-figuring the discussion Neo has later in the movie with The Architect (who has some important revelations of his own to add to this debate). The Merovingian attempts to convince the three main characters to give up their battle, as does The Architect in a different, more subtle way. Add to this further disclosures about the Oracle that complicate the questions of reality and illusion, and by the end of Reloaded, anyone familiar with the Matrix world is completely unsure of what is real and what is not, or at least of what the Wachowski brothers desire you to think about reality. After Reloaded, one really wonders whether the red or the blue pill is better.

Lest one think all this discussion of philosophy is unfair—that this is just an action movie after all—we are only scratching the surface of themes that derive from Plato to Baudrillard (the Wachowskis reportedly made several cast members read his book of essays entitled Simulacra and Simulation, the book that Neo used to hide his illegal computer discs in the first movie). Reloaded even has as a cast member Princeton philosopher and social critic Cornel West, who as Councillor West offers the advice, “Comprehension is not requisite for cooperation,” a saying apparently popping up on t-shirts in California nowadays. West was quoted in The New York Times as saying that he and the Wachowski brothers “had bonded over ‘wrestling with the meaning of life and the purpose of human existence.’ They share an affinity for plucking ideas from religion, philosophy, pop music, television and movies, and synthesizing them into a prophetic, liberating message. They want to make the world a more philosophical place.”

There are continuations of other ideas, introduced in the first film, too. The religious syncretism, particularly of Christianity, Gnosticism and Zen Buddhism, so rampant in The Matrix comes to the fore as speeches at the community gathering in Zion are called “prayers,” and offerings and oblations are presented to Neo as the savior of his people. The major conflict in Zion is between a new character, Commander Lock, head of the city’s security forces, and Morpheus over whether to treat the conflict with the machines on the basis of prophecies or rational, military decision. Questions of choice vs. destiny, love vs. its power, science vs. religion (or seemingly reason vs. religion), human dependence on machines vs. who is actually dependent on whom—all these are taken a step or two further, or merely repackaged, but almost none are resolved.

Two important differences from the first film should be noted. First, while The Matrix was almost completely devoid of sex and nudity, Reloaded has an extended, explicit sex scene between Neo and Trinity; even worse it occurs in the context of a grotesquely orgiastic dance scene in Zion, replete with the sexually charged drums that Allan Bloom claimed fifteen years ago were the center of the sexual license of the music of our age. The scene is an idiotic one, and has been much panned (Frank Rich: “…the movie’s multicultural orgy scene looks like a Club Med luau run amok, but maybe the inspiration for that was Kahlil Gibran.”), but it is something parents should be well aware of before allowing their children to watch the movie. The scene was largely the reason for the movie’s R rating.

The second difference to note is more positive. For the first time I can ever remember in watching a film, characters seem to be cast without any reference to their race, and this feels entirely natural. So an action sequence with Jada Pinkett or Laurence Fishburne seems just as “right” as does one starring Carrie-Anne Moss or Keanu Reeves, and intimate discussions of love and loss occur just as often with as much feeling between people of color as between whites. Hopefully, this indicates a real advancement in social consciousness, as many critics have mentioned this fact.

Reloaded was not intended to stand by itself as a film in any sense, as, for instance, The Empire Strikes Back or The Two Towers were within their respective series. Both those movies, while clearly ending with more of the story to be told, had satisfying conclusions in which events were finalized, and the arc of the story would begin in whole new places in the next episode. Reloaded, on the other hand, ends in the middle of the last day of mankind’s history unless something happens fast, and so questions are in no way resolved, tensions in no way relieved. This gives a “stay tuned” feel to the film, and so we must.

1. What character did you most identify with in The Matrix: Reloaded? Why? What character traits attracted you to them? 2. What do you think will be the resolution of the problems of perspective and reality raised by the two movies so far? How does your answer square with the Bible’s understanding of reality? To what passages would you point in order to discover what it teaches about the objectivity of reality? 3. Do you like discussing philosophy? Why do you think that is? 4. What do you make of the names and themes, obviously drawn from the Bible, that the movie uses for some of its main characters? How “Christian” are they in your opinion? 5. Neo and Trinity’s love for each other is obviously a central factor in the film. How is their relationship like that of a Christian couple? How is it not? 6. In The Matrix, Neo was clearly the disciple of Morpheus, learning new things from him at almost every point. How is their relationship different in The Matrix: Reloaded? 7. If the temple/sex scene is viewed as a cinematic image of neo-paganism, how does this change the message of the film? How might this scene make neo-paganism as a world view more attractive in our post-Christian world? What plans should you make to learn more about neo-paganism? (You might begin with John Seel’s Meet Your Neighborhood Neo-Pagan). 8. To what extent are you comfortable discussing issues like the ones raised by Reloaded with people who do not share your deepest convictions and values? 9. If you met someone who told you, quite seriously, that they had become convinced that human beings ultimately could not prove a difference between reality and illusion, how would you react? What would you say? 10. Compare and contrast the technical aspects of The Matrix and The Matrix: Reloaded. 11. Imagine that you asked ten non-Christians to summarize the evangelical Christian view of sexuality. What do you think they would say? Where did they learn this view? To what extent does it summarize the biblical perspective? 12. What are your thoughtful non-Christian friends taking from Reloaded? What issues are they most interested in discussing? Why is that? Your Christian friends? Why the difference or similarities?