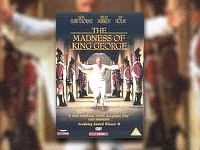 In the grand tradition of Amadeus, The Madness of King George takes a larger-than-life, historical figure and the queens, politicians, attendants and others who surround him and profoundly humanizes them. In this case the subject is George III, the king of England probably most famous for losing the colonies, and the device employed to bring him out of mythology and into history is the dementia he suffered for much of his reign.

The film opens with George, a gruff but likable “king of the people” (he was called Farmer George by his subjects), fully in command of both his senses and his country. But soon, strange behavior begins to plague the king as he awakes at all hours of the night, behaves unseemly toward the court ladies, and displays a reckless physical energy, running all over the castle grounds shouting obscenities and making ridiculous demands of his staff. The film draws its dramatic tension from the fact that the king’s eldest son, portrayed as a conniving fop by Rupert Everett, conspires with the party of the opposition to try to have the king put away, while the king’s government works feverishly to keep his illness under wraps. Little more than the question, “Will the king be cured, and will he be cured in time?” describes the plot of this movie, but the lack of action does not matter because it is not action that makes this film work. It is acting.

Performance after performance make characters which are completely foreign to modern America not just believable but likable, despicable, boring or engaging. George is played masterfully by the veteran British actor Nigel Hawthorne who created the role on the London stage in the play from which the film script was adapted. From his tender, playful scenes behind closed doors with Charlotte, his devoted queen, to his heart wrenching moments of clarity when he admits that he “seems to be here, but not all there,” Hawthorne gives the king a fullness and complexity that calls to mind performances by Olivier, Burton or Hopkins. Helen Mirren garnered an Oscar nomination (as did Hawthorne) for her moving and flawless enactment of the pitiable Charlotte, but a supporting cast including Everett; Ian Hole as Willis, the king’s physician; Rupert Graves as Greville, an assistant to the king; and Amanda Donohoe as Lady Pembroke, the Queen’s lady in waiting; all perform so masterfully that any of them could have been nominated.

George’s rich texture and grace owe much to many, including Alan Bennett who wrote the screenplay, Nicholas Hytner who directed and even Mark Thompson who makes his film debut as costume designer, but command performances all around are chiefly responsible for its beauty as a work of art. And this film is just that: art. In an age when special effects, increasingly prurient sex and violence, or major star presence is supposedly necessary for success, The Madness of King George breaks all the rules. Excellence at every level has created a movie that even handles potentially prurient elements with consummate taste while never backing away from showing the gritty elements —harsh conditions that include hair-raising medical treatments and comical diagnoses—that made life in eighteenth century Britain so distasteful.

Imagination is a treasure to be guarded and stimulated in just the right ways. It is rare when a period film catches the imagination and hurls us back in time, causing us to care about people long dead in situations foreign to all that we know and experience. But this movie so realizes its goal of making us care about George, Charlotte, Greville, Willis and the rest that we sit, transfixed and transported to “England’s green and pleasant land,” and happily for two hours suffer and rejoice with a poor, very human king who has a wife that adores him, a son who despises him, and a burden that torments his soul. And that is what great art is all about.