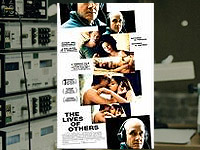 How do you feel when you see or hear something beautiful? Not a leaf-in-the-wind kind of beauty, but extraordinary beauty? In The Architecture of Happiness, Alain de Botton makes an intriguing suggestion:

While a common reaction to seeing a thing of beauty is to want to buy it, our real desire may be not so much to own what we find beautiful as to lay permanent claim to the inner qualities it embodies… What we seek, at the deepest level, is inwardly to resemble, rather than physically to possess, the objects and places that touch us through their beauty.

If he’s right, then I am attracted to my wife not only because I long to be with her. I think that in so doing I may become like her in visible ways. By being with someone or owning something beautiful, I may become beautiful.

The transformative power of beauty is at the heart of an urban legend of the old Soviet Union. After a concert Lenin remarked to Maxim Gorky that Beethoven’s Appassionata sonata was the most beautiful piece of music he’d ever heard, but that he was going to stop listening to it. He said Beethoven makes me want to pat the heads of people… But now one must not pat anyone’s head… one has to beat their heads, beat mercilessly, although ideally we’re against any sort of force against people. Hmm… it’s a devilishly difficult task.

In The Lives of Others writer/director Florian Henckel von Donnersmarck explores what might have happened if Lenin had kept listening.

The Lives of Others won the 2006 Oscar for Best Foreign Language Picture. It should have won Best Picture, period. (Compared to it, The Departed feels like a bad day spent in Boston traffic.) In it, first time director von Donnersmarck has crafted the most satisfying and deeply human film I’ve seen in years.

Set in East Germany before the wall came down, The Lives of Others is the story of Gerd Wiesler, a Stasi agent (short for Ministerium für Staatsicherheit, i.e. the East German secret police, whose stated goal was “To know everything”) who specializes in and teaches interrogation techniques. He wears the same outfit everyday (gray, of course), lives in a tidy but Spartan apartment, and has only one friend: ex-classmate Anton Grubitz, who owes his academic success to Wiesler’s tutoring and who ironically is now his boss. His only other human contact, as far as we can see, comes in the form of a liaison with a prostitute. (After sex when he asks her to stay for awhile, she says: “Next time hire me longer.”) Above all, he is a true believer in the state-dominated system. (When one of his students questions the inhumane nature of the interrogation techniques Wiesler is teaching, he’s reminded that the people they’re dealing with are “all enemies of the state.”) All things considered he’s not so much an evil little man as a terribly efficient one.

In the course of the film we observe his transformation from efficient state servant to human being. It’s not a fast change or a dramatic one. (In a recent interview Herr von Donnersmarck remarked that no one changes quickly “without divine intervention.”) Nor is the transformation primarily political in nature. The Lives of Others is not yet another tired tale of the triumph of capitalism. It is instead a story of the power of beauty and the sacrifices necessary to create it.

The catalyst of Wiesler’s metamorphosis at first seems unlikely: he’s assigned the task of spying on playwright Georg Dreymann and his girlfriend Christa-Maria Sieland. Their lives are the antithesis of his. Their apartment is full of people; his is empty. In the evening they read Brecht, listen to music, and discuss the world with their friends while he watches TV alone. They are trying, quietly and subversively, to be human in a horribly inhuman setting, and as Wiesler vicariously participates in their lives, he becomes more like them. He becomes more human.

I can’t describe the details of this process without ruining the film for you and that would be a crime, but I will offer one bad analogy. When was the last time you fell in love? Poet Christian Wiman describes the experience like this:

the sense I have is of color slowly aching into things, the world coming brilliantly, abradingly alive. I remember tiny Albert’s Café on Elm Street in Chicago where we first met, a pastry case like a Pollock in the corner of my eye, sunlight suddenly more itself on an empty plate, a piece of silver. I think of walking together along Lake Michigan a couple of months later talking about a particular poem of Dickinson’s (“A loss of something ever felt I”), clouds finding and failing to keep one form after another, the lake booming its blue into everything; of lying in bed in my highrise apartment downtown watching the little blazes in the distance that were the planes at Midway, so numerous and endless that all those safe departures and homecomings seemed a kind of secular miracle.

In a way Wiesler’s change is like this: his second-hand world is more beautiful and more significant. But it is more painful, too, as de Botton acknowledges:

A perplexing consequence of fixing our lives on an ideal is that it may make us sad… Our sadness won’t be of the searing kind but more like a blend of joy and melancholy: joy at the perfection we see before us, melancholy at an awareness of how seldom we are sufficiently blessed to encounter anything of its kind. The flawless object throws into perspective the mediocrity that surrounds it. We are reminded of the way we would wish things always to be and of how incomplete our lives remain.

Edith Schaeffer used to be fond of saying, “In a fallen world nothing of beauty is ever created without someone making a sacrifice.” It’s certainly true in von Donnersmarck’s story. In the end both Wiesler and Dreymann make sacrifices. Their sacrifices cost them a great deal, produce great beauty, but the world around them goes on unchanged.

This is true in our story, too. According to the Scriptures Christ sacrificed himself to make us beautiful, as in Philippians 2:15:

… so that you may become blameless and pure, children of God without fault in a crooked and depraved generation, in which you shine like stars in the universe.

Ironically often the opposite seems to be true. My friend Ellis Potter often asks, “If someone you know becomes a Christian, would you expect him to become more creative or less? More interesting or less? More beautiful or less?”

How our lives answer this question may have less to do with our soteriology than it does with our anthropology. What does it mean to be human? What should it look like? Our lives will either move the Wieslers of the world to seek to lay permanent claim to the inner qualities we embody or turn them to the lives of others.

1. What was your initial or immediate response to The Lives of Others? Why do you think you reacted that way? 2. To the extent that life in Communist East Germany is something you never experienced, how did the film depict it so that as viewers we were drawn into its reality? How would you describe that reality? 3. In what ways were the techniques of film-making (casting, direction, lighting, script, music, sets and backgrounds, action, cinematography, editing, etc.) used to get the film’s message(s) across, or to make the message plausible or compelling? In what ways were they ineffective or misused? 4. Identify and describe, as objectively as possible, each of the main characters in the story. What is their role and significance? With whom do you identify? With whom are we meant to identify? How do you know? 5. Are there any clear heroes in the film? What makes them heroic? 6. Are there any clear villains in the film? What makes them so? Did you sympathize with any of these characters? If so, how was the director able to arouse your sympathy? 7. Stories are only as captivating as they are plausible. To what extent did you find the film plausible? 8. Read aloud and discuss each of the quotations included in the review 9. What specific scenes in the film stand out as particularly impressive? What makes them so? 10. This story unfolds without the presence of explicitly religious or Christian characters. Assume you were asked to write a minor Christian character into the screenplay without changing the trajectory of the basic plot. What would they be like? Where would they appear? What might they say? 11. What sacrifices were made in the film? By whom? Which sacrifices were worth it? Why? 12. If a sympathetic but unobtrusive stranger followed you around for an entire month, would they conclude you are living a life characterized by beauty—might they say you “shine like a star?” Why or why not? How is that beauty (or its lack) expressed? What would this stranger point to as concrete evidence for their conclusion? What plans should you make? [Questions were written by Denis Haack]