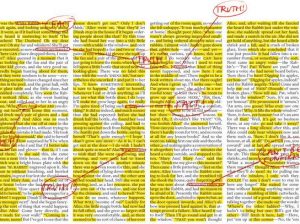 Truth, Reality and Facts
Two quotations from Lao-tzu adorn the first two pages of The Lifespan of a Fact. On the first page the Chinese philosopher is quoted as having written, “True words are not beautiful.” On the second the saying reads: “Beautiful words are not true.” The problem with the underlying philosophy of this book, penned by a University of Iowa creative writing teacher and a fact checker at a magazine that had accepted the former’s essay, cries out from the juxtaposition of these two sayings, as if they contradicted each other, but were somehow both true. The fact is both could be false (I believe they are), both could be true, the first could be false and the second true, and vice versa because they deal with two different categories: the beautiful and the true, which have ample space for each other in any reasonable discussion, especially when applied to language.

The Lifespan of a Fact does not seem to allow for this subtlety, however. The book is made up of the correspondence between John D’Agata, who submitted an essay in 2003 to the magazine The Believer with the understanding that there may be some actual discrepancies in it, and the fact checker for the magazine, Jim Fingal, who was given the assignment “to comb through [the essay], marking anything and everything that you can confirm as true, as well as whatever you think is questionable” (“the Editor”, p. 11). Fingal took has task seriously and thereafter followed an email correspondence that lasted seven years as D’Agata and Fingal argued, revised, and “struggled to navigate the boundaries of literary nonfiction” (back cover).

The essay began with an historical fact: On July 13, 2002, a teenager named Levi Presley climbed to the observation deck of the Stratosphere Hotel and Casino in Las Vegas, Nevada, and then jumped to his death at 6:01 p.m. From that point, author D’Agata constructs an essay combining fact, arguable fact, close to fact, arguable fiction and pure fiction (lots of the last) in such a way that, appearing to be essentially factual, the essay lies regularly to its readers. Of course D’Agata gave many personal opinions in the piece; it is an essay after all. The problem for Fingal came in the places where D’Agata seemed to be referring to an objective fact about the setting of the incident, the time or setting of other related incidents, etc.

D’Agata is completely unrepentant for his modus operandi because he simply believes that truth results from literary creation, not historical accuracy. After ruminating about the purposes of the ancient historian Herodotus, he writes, “I guess my point is that, if we were to return to a description of this genre [the essay] that defined it according to its most inherent activity—one of curious investigation, rather than the fulfillment of some arbitrary sense of veracity—then I think we would be less inclined to make moral judgments about the choices writers make in this genre, and start instead appreciating those choices as effort on behalf of literature” (p. 112). He argues that historically the essay “is not a vehicle for facts, nor for information, nor verifiable experience. An essay is [emphasis the author’s] an experience… It’s an enactment of the experience of trying to find meaning…” (p. 111)

Fingal defends the reader and their expectations, but he does not really do so on the basis that there is a reality, an objective truth, and the essayist should at least try to approximate it. He argues only that in our culture the genre “essay”, rightly or wrongly, implies “nonfiction essay” and a trustworthiness of the details described in the essay as historical facts. Thus he regularly accuses D’Agata of misleading his readers, while arguing that would be OK, if D’Agata just admitted that he was writing fiction. D’Agata steadfastly refuses to do so, arguing throughout the book that he has the right as an author to manipulate the facts in such a way that he gives the reader a feeling of the truth of the subject of the essay.

The discussion in this book reminds me of a recent public letter I received from Ken Myers of the Mars Hill Audio Journal. In it Myers refers to an essay by C. S. Lewis entitled “Modern Man and his Categories of Thought” written as a working paper for the Study Department of the World Council of Churches, and published in Present Concerns: Essays by C. S. Lewis. Reflecting on Lewis’s essay, Myers writes: “But the ascendency of materialism as the only public orthodoxy has whittled away the once sturdy stock of generally shared convictions, so that…the ‘common vocabulary’ is not adequate to describe the kinds of creatures we really are. It does not offer resources for the common good, since it cannot recognize that the good pre-exists our desires.” Myers is right: the world we live in is so divided in politics, individual and social mores, even in standards of civility, not because “people are just different”, but because a set of commonly accepted ideas, the basis of our conversations and of all our important social actions, has almost vanished. We simply don’t agree anymore on anything foundational from which we can build a case, and so we can’t even begin to act or think together about what is good, beautiful or true.

Such is the world D’Agata and Fingal inhabit; there are no facts. For D’Agata at least, there aren’t even any obligations to aspire to truth telling. There are only stories. The major difference between D’Agata’s point of view and that of the Christian is this: he embraces that framework of reality, while we strive with all our might against it.

Lifespan of a Fact provides a rich source of topics for discussion including the nature of historical truth and its relation to concepts like facticity, veracity, reality and history. The book can also lead a group into an important investigation of the forms in which writers choose to write and those writers’ responsibility to themselves, to their readers and to the discipline of writing. Lastly, the question of different kinds of truth, e.g. historical truth, imaginative truth, exhaustive truth, finite truth (to name just a few), relates in a deep and important way to the way we understand the ways of God with humankind, and Lifespan gives one a platform for framing these questions, too.

An earlier version of this review first appeared online at http://studycentersonline.org/resource/truth-reality-and-facts/.