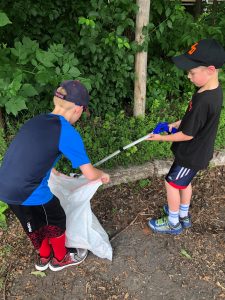 The Last Straw
I think it was the video of a plastic straw stuck up the nostril of a sea tortoise leaking blood and a vet removing it that made me think I could live without straws. You probably know a lot more than I do about how plastics damage the environment. One affect that bothers me a lot is ocean pollution. These days most ocean creatures not only have plastic parts in their stomachs, microfibers are found throughout their digestive systems causing concern as they absorb the toxic chemicals from plastic.

I can’t do much about the oceans since I don’t regularly dump my bilge water in the Atlantic. The little we can do might seem piddling against the impact of global plastic onslaught because it’s everywhere from the packaging on my new toothbrush to prescription bottles from the pharmacy, right? Where does one begin to change habits or help when the problem of pollution is so massive? What difference can one person make? However, that has never been a legitimate argument against doing the right thing or an excuse for doing nothing. So Denis and I have thought about what can we do to help by trying to eliminate some or at least limit our use of plastic or other things that damage the environment.

* We pick up a coffee at Starbucks now and then – I’m not going to say how often because you might judge me. I make such a deal out of being a coffee snob you’d think Starbucks was beneath me. Anyway, we’ve purchased their refillable cups. No more need for a new one any time we order.

* Straws. We quit buying straws. It’s embarrassing to admit I liked bendy head straws because at night I hardly need to raise my head for a sip of water – just bend the straw to my mouth. Humiliating. We don’t use them at restaurants anymore. My swallow works just fine without them.

* Water in plastic bottles from the supermarket. No more. I’m getting in the habit of taking my refillable bottle in the car whenever I leave the house. Seems I’m always thirsty. I used to provide a bottle of water for overnight guests. Now I invite them to take a glass up to the bedroom with them.

* Plastic wrap. This has been a little more difficult to replace. I purchased beeswax wraps that cover open dishes or protect things like cheese or deli meat. They are cumbersome but you can wash and reuse them over and over. Wax paper also has more uses than we think.

* Easy to do: we keep cloth tote bags in the trunk of the car so when we go to the grocery store, I just grab several to take in thus avoiding the temptation to use plastic grocery bags.

Prayers of the People
A person doesn’t need to be crunchy granola to change their lifestyle a little to help protect the earth. There are reasons for caring embedded in what it means to be a Christian. When we first began attending Church of the Cross I had not been exposed to a regular part of the Sunday service devoted to what is called Prayers of the People. Among other things we are reminded each Sunday that part of our work and calling as humans is to take care of the natural world around us. This part of the prayer is often framed with words from the Book of Common Prayer: “Give us reverence for the earth as your own creation, that we may use its resources rightly in the service of others and to your honor and glory.” From the beginning of creation God told us we were to be stewards of the earth. A steward is “one who is called to exercise responsible care over possessions entrusted to him or her.” We are required to do it in a way that doesn’t merely exploit it for profit or for one’s own convenience.

In the five years we have lived at the House Between we’ve observed land around us being devoured by huge developments. Small farmlands, ponds, fens and forests have been turned into condos and homes large enough to each house dozens of people from other parts of the world. When we first moved here fox and coyotes passed through our yard and along the edge of the woods. It grieves us that it has been a year since we’ve seen any. On our neighborhood website people complain about coyotes and want city officials to “take care of them.” They’re afraid of them and fear for their little dogs. One neighbor noted that it used to be that each spring you’d see a lot of rabbits, but as summer wore on there were fewer. Coyotes and foxes controlled the population and indeed, a couple years ago I watched a fox trot across the yard holding her head high so as not to drag the rabbit dangling from her mouth. They’ve mysteriously disappeared and we’ve heard the county “took care of them.” Meantime the rabbits reproduce, well, like rabbits do. When I walk in our yard there are always rabbits frozen in the grass. They eat our flowers, shrubs and my cucumbers – the only vegetable I managed to plant this spring. When I approach they bound away only to return as soon as I leave.

To be honest, I have contributed to pollution and destruction, too. We live on ¾ of an acre that slopes into a wooded ravine behind us. When it rains the water drains off into a little creek down below and from there flows into the Credit River on its way to the Minnesota River and finally into the Mississippi only a few miles downstream. We like our lawn lush and weed free like others on our cul-de-sac. It’s the American way. It costs far more to hire a company using organic applications, but last year with certain invasive weeds growing like mad we went with one of the chemical companies who love to claim that nothing they use causes permanent poisoning to anything or anyone. All the water contaminated with pesticides and chemical fertilizer that runs off our property ends up in our watershed. It turns out that according to “the U.S. Center for Disease Control and Prevention (CDC), a study of 9,282 people nationwide, found pesticides in 100% of the people who had both blood and urine tested. The average person carried 13 of 23 pesticides tested.” (eartheasy.com) That’s just one consequence.

This year we are back with GreenCore Organics for the time being. I wish we had the guts and energy to keep our yard another way. Make a prairie garden, perhaps.

Irrepressible Creation
While it can be complicated and discouraging to see the damage that exists, there are times we witness things that give hope that even small efforts make a difference in caring for the earth.

I have a friend with twin boys who just turned seven. Without being told they often head out to pick up trash in the neighborhood with a bag and one of those nifty little trash grabbers. The other day they had put in about an hour at this when a kind priest spotted them and gave them a $20.00 bill to get themselves a treat. Their mother reports “They bought ice cream and generously gave me one too! There is $10 left over and now they are absolutely delighted at their newfound wealth and can’t decide where to even begin to spend it.” They have always been cool little kids.

It is summer here as it is all over our country. Sunny days follow on days of clouds and rain. The wood outside my window lights up in a million different shades of green when the sun sends rays down through the canopy. It makes me think how lovely not to have only one color of green. How boring that would be. A doe wanders past and pauses to nibble the hostas. She is in her red-brown summer dress and twitches her tail to chase off bugs revealing her bright white flag beneath. Trailing behind are her tiny, spotted twins. Several male turkeys cross the yard jog-walking in a line, a single decorative feather hanging from their neck like a fancy tie as if they’re late to an important meeting. I am staking the tomatoes growing in pots on the deck. They sit beneath the hummingbird feeder and while I’m working suddenly a hummer helicopters in my face, his ruby throat aglow. I have invaded his territory and he threatens me eye to eye before buzzing off.