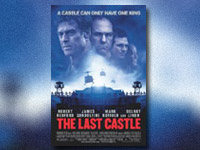 General Irwin ignored an order that cost the lives of several men. The decorated soldier carries an impressive past record of everything from commanding men through four major conflicts to surviving a POW camp. But due to his failure to heed a direct order, he faced a trial at which he pled guilty and was expedited to serve a ten year sentence in a military prison.

The warden, Colonel Winter, runs a tight ship. He is a civil war buff who has not seen real combat. Nevertheless, he regards his work at his prison as a daily war. And, oh, by the way… he regards General Irwin as a hero. Winter asks Irwin, “What do you hope to get out of your time here?” Irwin replies, “Nothing. I just want to do my time and go home.” Winter replies, “Perfect.” But when Irwin begins to see the injustice the warden is guilty of committing against the military prisoners, he takes a stand not only against the injustice, but for the dignity of his fellow inmates.

Quotes and Moments
Prisoner: What did you mean about this being our wall? It’s Winter’s wall…
Irwin: In 1870 there was nothing here. The original prison was built by prisoners… See this, “Private A.J. Beck, 1912-1923.” What do you suppose Private Beck was thinking building his own prison? My guess is that he wasn’t building a prison… In his own mind he was raising walls to protect himself. My guess is he was building a castle… Still could be if somebody rebuilt it.”
Prisoner: How are we supposed to rebuild it?
Irwin: Don’t ask me. I don’t know anything about walls. Ask Aguilar. His dad’s a mason.

Winter: These salutes… I’ve given them some thought. Technically they are not a violation of regulations. So if the inmates can confine themselves to a simple hand movement through the air, I see no problem with it. And if the men want to call you chief, well then, fine… Free speech and all that. Okay then.
Irwin: No, Not okay. It’s too late, Colonel.
Winter: Too late for what?
Irwin: Too late for your offer. The men don’t want to salute. They don’t want to use rank. They don’t want better food or more TV. They just want your resignation. So do I. You’re a disgrace to the uniform. You should not be allowed to retain your command.
Winter: Well, then I’d better go pack.
Irwin: I think you should.
Winter: Tell me, Mr. Irwin, what’s to stop me from placing you in the hole for, say, six months?
Irwin: Nothing, if that’s the way you want to win.

1. Film is perhaps America’s dominant art form. It is an ironic combination of artistry and superstar celebrity. Robert Redford, director of beautiful films like A River Runs Through It and The Horse Whisperer, is the personification of this tension—equal parts artist and superstar. There is a growing corpus of “prison films.” Consider Shawshank Redemption, Alcatraz, In the Name of the Father and The Great Escape. Prison is a setting that helps tell stories of redemption. As we consider this film on an artistic level, let’s examine the story and the vehicles used to tell it. 2. What do you think was excellent about this film? What could have been done better? Were there other ways Irwin could have found justice? 3. Many critics disliked this film, claiming it was too far-fetched for reality. Why did these film-makers tell the story the way they did, albeit far-fetched? 4. How well do you think the story was told? What methods were used to tell the story, besides just script? 5. Comment on general themes of prison movies. Did this film seem to be a rehashing of other prison stories, or did it tell a unique story in its own right? 6. What does this film try to tell us about truth, justice, relationships, the worth of human life, actions, etc? 7. Did any of the characters stand out in their unspoken communications? 8. For some, this film is just another Hollywood “underdog gets justice as things blow up.” It likely would have been so for me, had it not been for three things: the wall, the dignity of personhood and the refusal to allow injustice to stand. 9. What was the history of the wall in the prison, and how did Irwin’s assessment of it contrast the Warden’s? 10. Why did Irwin tell the inmates to think of it as a castle, albeit one that keeps people in? Was this counsel applicable only to this film, or is there a lesson here for us? 11. How was the wall used for redemption? Consider Irwin’s comments, the demolition and murder of Aguilar, the revolt and the use of its parts. 12. What did the use of the wall in this film tell the viewer about how to regard work? Is work something that is a result of our fallenness, or is work something God intended for us to do when He made us? 13. Irwin tells the guard who is about to strike another inmate, “You’re better than this.” He said this based on the “rules of discipline” violation that led to this confrontation. This next series of questions deals with the injustices and responses to them in this film. 14. What were some of the injustices depicted in this film? Did you find yourself rooting for the convicts because of the Warden’s corruption? Did you remember that many of these convicts were in prison because they were justly sentenced for terrible crimes? What kinds of “justice” are convicted criminals entitled to? 15. Who does Irwin have to convince to value justice? How does this translate into the culture you live in? Who do we need to persuade to value justice in order to have it? 16. What are the core issues driving the Warden’s disregard for justice, and how are they manifested in his character in this film? 17. Do you think this film treated justice in a worthy manner? Why or why not? 18. One thing that sets this prison movie apart from many others is that there is no attempt to escape. Rather, General Irwin launches a revolt primarily to get the warden fired so that the convicts in the prison will be treated with dignity and justice. 19. How does this film dignify life? How does Irwin dignify the other inmates? The guards? The military? The country? 20. In the scene where Irwin moves the rock pile, why do you think he never gave up? Where do you think he found his strength? 21. How did Irwin’s reputation before prison affect his ability to lead? 22. Did it surprise you that the rest of the inmates rallied around him, even though he was not leading a breakout? Why or why not? 23. Does this notion of “getting through without getting out” help you see anything in your life or world differently? If so, what? 24. Why do you think the flag was raised right side up at the end? 25. How might this film be used as a point of contact for discussions with non-believers? 26. How is this film a window of insight into how a Christian should live, think and act?