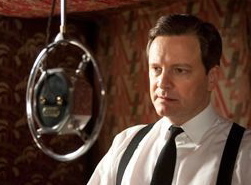 “Be not afraid of greatness: some are born great, some achieve greatness and some have greatness thrust upon them.”
[William Shakespeare in Twelfth Night, Act II, Scene V]

In January 1936 King George V of England died, leaving the throne to his son David, who reigned as Edward VIII for 325 days before abdicating in order to marry an American divorcee, Wallis Simpson. His brother, Albert, then became King George VI and reigned until his death in 1952.

Tom Hooper’s splendidly entertaining film The King’s Speech is the story of Albert’s unlikely ascension to the throne and of help he received along the way from an equally unlikely source.

In America we’ve long celebrated the right of an individual to shape his or her own life. It is part of our DNA. In pre-World War II Britain, things could not have been less American, especially for the royal family. The young Albert, it seems, was left-handed. As this was considered inappropriate for a prince, he was forced to use his right. Bertie was also slightly knock-kneed, thus his boyhood years were spent in braces to create a good, royal bearing. Unfortunately all of this shaping also produced a strong stammer that haunted Albert throughout his life, and for a man whose professional purpose is to be a public figure this was, to say the least, awkward.

In The King’s Speech Albert’s search for help with this problem leads him through a frustrating procession of doctors who treat his problem with less-than-effective therapies ranging from marbles–in-the-mouth to smoking. (Albert died in 1952 from lung cancer brought on by smoking.) When his wife Elizabeth (played by Helena Bonham Carter) in disguise seeks the help of yet another therapist, he simply suggests her husband “change jobs,” and when she says “he can’t,” he wants to know why. “What is he, an indentured servant?” Her ironic answer—“Something like that”—captures Albert’s dilemma: he is not free to decide which role his life will play. His only choice is how that role will be played and with war looming there’s a lot riding on his performance.

Enter his redeemer. Lionel Logue (Geoffrey Rush) is the antithesis of Albert (Colin Firth). He’s not only a commoner he’s a (mostly) failed actor who makes his living as a self-styled speech therapist. He’s a man who determinedly lives life his way. He treats speech impediments his own way, too. The King’s Speech is rated R because of a scene in which Lionel encourages Bertie to curse extemporaneously. The result is one of the most delightfully vulgar things I’ve ever seen on film. With Lionel’s help Bertie not only learns how to give a speech, he learns how to serve.

The bell tower here at the University of Texas is engraved with a quote from the gospel according to John: “You shall know the truth and the truth shall make you free.” It’s a goal students at U.T. pursue every day, nota pursuit of knowledge, but of the freedom to define one’s self. In the name of freedom they choose not only their careers and spouses, they can choose to change their sex, their appearance, and one day whether or not to keep their children. For them, freedom is doing what they want. It’s not what Jesus had in mind when he spoke. According to theologian J. I. Packer, Christian freedom is first freedom from: freedom from the power of sin and the tyranny of pleasing ourselves. And as people who have been set free, we’re called to see what freedom is for: to love and serve God and our neighbor. Service is what we were made for, so freedom is found in serving.

Does Bertie live happily ever after? At the risk of spoiling the film, I’ll answer: no more than we do. The hope of the gospel isn’t that if we work hard everything will be all right. Our hope is in what Christ has done and is doing in our midst. But Bertie does discover that necessity isn’t the opposite of freedom.

1. What are your first impressions of the film? First impressions aren’t considered conclusions--they’re what you’re left thinking of in the moments after the film ends. 2. Contrast the brothers, David and Albert. How are they similar, in what do they differ, and why? Which attracts you more and why? 3. Contrast Albert and Lionel. Aside from their professional relationship, what do you think attracted them to one another? How was theirs an unlikely friendship? 4. What visual images from the film stand out most strongly in your mind? Lionel is shown most often against an inviting backdrop—a fireplace or a chair—while Albert is shown more often in space—in a large room or in front of a blank wall. How does this influence the way you feel about each character? 5. While he never pretends to be a medical doctor, Lionel makes no effort in the film to make sure Albert knows he isn’t one, which leads to an embarrassing moment later. In your opinion is this less than honest and worthy of criticism? Or is Lionel the victim of society’s overemphasis on credentials? 6. David also gave a famous speech—his announcement that he has stepped down as king—that isn’t heard in this film. It includes these words: You all know the reasons which have impelled me to renounce the throne. But I want you to understand that in making up my mind I did not forget the country or the empire, which, as Prince of Wales and lately as King, I have for twenty-five years tried to serve. But you must believe me when I tell you that I have found it impossible to carry the heavy burden of responsibility and to discharge my duties as King as I would wish to do without the help and support of the woman I love. And I want you to know that the decision I have made has been mine and mine alone. This was a thing I had to judge entirely for myself. The other person most nearly concerned has tried up to the last to persuade me to take a different course. I have made this, the most serious decision of my life, only upon the single thought of what would, in the end, be best for all. Discuss this quote. Do you admire David’s decision to abdicate? Why or why not? 7. There were many objections to David’s marriage to Wallis Simpson—social, political, and moral—but only one with legal grounding. Mrs. Simpson’s first divorce was not recognized by the Anglican Church and, therefore, might not have been considered legal in a British court. So David in marrying her might have been guilty of bigamy. Do you think David should have been allowed to marry her and continue as king? Defend your answer. 8. Define freedom. How would Albert, Lionel, and David define it? (That’s 3 more definitions, not one shared.) 9. In one of the film’s pivotal moments, Lionel, deliberately goading Albert to anger, asks “Why should I listen to you?” Discuss Albert’s reply: “Because I have a voice!”