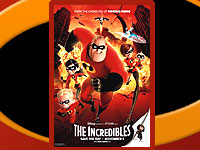 The Incredible Incredibles
The Incredibles, Pixar’s sixth, and best, of six superb movies, shows how much fun and how inspiring a movie can be, even though it unashamedly centers itself in secular values. The Christian rejoices because those values just happen to correspond regularly with the revealed values of Scripture. There is a priceless lesson in this film that ought not to be lost on us, as we seek to live in a country, which appears so divided on “values” issues. The lesson is that the Christian memory, which continues in America today, remains so deep and powerful that, though it appears almost gone in many sectors of our society, a powerful work of art can tap into it, bring it to the surface and create joy and hope under its influence for millions who do not call themselves Christians. Couple this cultural memory with the commanding presence of the natural truths and morals God has always instilled in humanity, and there is much fertile ground in American film for the Christian to plow, sow with Biblical seeds and reap a harvest of Christian thought that is greatly edifying.

The Incredibles begins with everything right in the world of superheroes. Mr. Incredible, a blended caricature of Superman, Batman and James Bond, displays his special gift of strength by saving a kitten from a tree, foiling a bank robbery, and keeping a super-villian from destroying a building with a bomb, all just in time to get to church for his own wedding. Hugely barrel-chested with a tiny waist and tree trunk legs and wearing a red suit in true superhero fashion, he teams up with Elastigirl (who has, as her name implies, the ability to stretch around the block if necessary, to apprehend the criminal she seeks), foils a criminal’s escape, and the two hours seems set to give the viewer an adventurous, happy ride of alternating tense situations, all of which end with the good guys winning and the bad guys losing.

Soon, however, all is not well in superhero land, and thank goodness because Brad Bird, the writer/director of The Incredibles, is after something else entirely other than a formulaic children’s story of “happy endings from the beginning.” Due to a media- and litigation-based crusade against the superheroes, the victims they rescue begin to sue them for damages. All superheroes are forced to take regular jobs and assume normal names, as the government outlaws their activity and buries them in a relocation program. The Incredibles become, none too subtly, the Parrs. Bob Parr, a.k.a. Mr. Incredible, labors at a desk job in a cubicle that he can barely fit in, only able to reflect wistfully on the good old days, as he looks at the newspaper clippings of his heroic deeds. As the film progresses, an evil archenemy named Syndrome lures the family out of hiding, with a plan to make himself the only “superhero” available, though he is himself normal and relies entirely on machines he creates.

Syndrome’s plan is to kill off all superheroes, after which he can fake his own deliverance of a city, when in fact, he is the one that put it in danger in the first place. The inevitable showdown occurs after a thrilling set of action and adventure sequences that are as much fun because of their echoes of old James Bond movies, as they are because of the remarkable artistry that the Pixar people demonstrate.
Most of the reviewers of this film, especially the ones who liked it, see the movie’s main theme as the affirmation of special giftedness, with a heavy dose of argument against the penchant of American culture today to think of every person’s gifts as equally valuable. This augurs a society in which, as Syndrome sneeringly describes it, “everybody will be super, which means no one will be.” No doubt this idea ranks high in the focus of the movie. The plot shows the triumph of the superhero and the defeat of twisted “mediocrity,” and much of the middle part of the film sets up the despair many feel at the saluting of normality, when everyone knows it is nothing to commemorate. As Bob puts it, when he refuses to attend his son’s “graduation” from fourth grade to fifth, “They keep finding new ways to celebrate mediocrity.”

As important as this theme is to the film, though, The Incredibles receives its deepest uplifting punch from the main motivation behind its creation. Bird was quoted in a New York Times interview as saying that the film was inspired by his own having children and the problems this caused him in his personal life. “I had this goofy movie idea about superheroes trying to balance family with their responsibilities to society…It’s about the danger of looking back to the exclusion of what’s in front of you…On the surface, it’s meant to be a blast, a pretty basic action movie, but below that it’s about some basic issues – getting older, getting married, being a teenager, what it’s like to be in a job you don’t like – all wrapped in superhero clothing.”

Watching Bob Parr lose his temper when his car door won’t shut, after a long, frustrating day at the office; listening to the Parrs’ son Dash tease his older sister Violet, and to her tease him back; seeing the worry, then fear, then anger on the face of Helen, Bob’s wife, when she mistakenly thinks Bob may be seeing someone on the side—all these situations, and many more like them, bestow a strong dose of reality on this fantasy film that make it easily the most enjoyable “children’s movie” in many a year. The Shrek movies depend for much of their humor on slapstick, bathroom jokes, but The Incredibles blends basic, family wit with poignant, real-life circumstances in such an engaging, easy-going, comprehensible, way that both child and parent are never unsure where the movie is going or what it is about.

With dialogue that is crisp, witty and thoroughly clean, action sequences that rival any in the non-animated action/adventure genre today, and characters who face real challenges that most of us face, this children’s movie is much more than that. It is what a family film is supposed to be: good for the whole family.

1. What was your favorite scene in the film and why? 2. How realistic are the characters in the movie, especially in light of their being animated and intentionally drawn as caricatures? With which character did you most resonate? 3. What do you think of the way Mr. Incredible treats Buddy at the beginning of the film? Does his not letting Buddy help him, instead brushing him off, contribute to Buddy’s revenge later? Is this OK? 4. There are numerous family situations in the film. Did any of them remind you of past events in your own life? Did you learn any thing new that can make you a better husband, wife, daughter, son? 5. What did you think of the way Bob and Helen relate to each other? What about their relationship was consistent with Christian understandings of marriage? What was inconsistent? 6. How does the film handle the problem of balancing family life with work responsibilities? What ideas can you glean from the movie that could help you balance these in real life? 7. What do you think of the theme of the movie that denies the validity of celebrating normalcy? Aren’t all people equally important? How do you think we should acknowledge the image of God in everyone, yet recognize talents or acts of special merit?