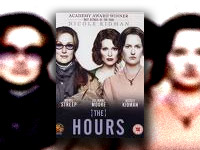 Critics often speak of the layers of a film, but I don’t believe I’ve ever understood what they were talking about until I saw The Hours. The more one thinks about its themes, the more connections one makes with life, art, people, and literature. The experience is like that of digging into a mine of meanings, and being more and more rewarded with richer veins of ideas the deeper one goes.

This is not to say that The Hours is a picture that portrays reality in all its fullness. For a Christian, whole crucial elements of life as it is in a universe where God exists, creates, and redeems are completely absent. No one in the film goes to church, no one professes faith, no one even seems a likely candidate to profess faith, if the subject were brought up. There is but one reference to the transcendent in the film, and that is in a sarcastic mention of omens. Everything in the film rotates around the human condition, and in portraying that, it has no peer. The film renders almost perfectly the alienation humanity suffers in a world without significance, the loneliness and separation felt by the best and the brightest—in this film, the “poet… the visionary”—who, as one of the main characters, says “has to die in order that the rest of us should value life more.”

The Hours, to put it mildly, is not easily categorized. The film is structured as three separate but parallel stories, connected by the relationship three separate women have to Virginia Woolf’s novel, Mrs. Dalloway. After a brief opening in which we see Woolf, played in an Academy Award winning performance by Nicole Kidman, commit suicide by walking into the river Ouse, the film moves back and forth between single days in the lives of the women: Woolf herself in 1923, a housewife named Laura Brown in 1951, and Clarissa Vaughan, an editor living in New York in 2001. Woolf, living in Richmond, England, feels trapped by the boring, sterile life of the suburbs. Brown is similarly distraught by her existence as a mother and housewife in the “perfect” life of 1950s Los Angeles. Vaughan, in contrast, lives in bustling Manhattan, but has the same feelings of distress brought on by what she perceives to be the triviality of much of her existence.

This variation of both time and place, while unifying the stories by the similar theme of alienation, supported by comparable characteristics of each woman’s life like the difficulty in their spousal relationships, their explorations of homosexuality, and the angst each feels in making decisions, makes the film a deeply philosophical one. Hours explores the idea of a single day encapsuling all of life; as Woolf puts it in musing about her heroine, “Just one day… and in that day her whole life.”

But this movie is anything but a pure, philosophical abstraction. With massive complexity and verisimilitude to life, the characters are fully drawn by the script and the magnificent actresses who portray them. Kidman’s performance, though tragically overshadowed in the press by far too much discussion of a prosthetic nose she wears to simulate the noble, but tortured, features of Virginia Woolf, pounds discomfort and anxiety into the audience’s perception of this sad woman as she struggles with her genius and her madness. Julianne Moore is brilliant as the ultimate foil in the film, the beleaguered and cowardly (though the film makes no moral judgment of her decisions) Laura Brown who abandons husband and children because she is unable to bear the sterility of her existence. Meryl Streep plays Clarissa Vaughan as the piteous worrier she is, desiring to feel significant but too overcome by past regrets and present feelings to find the meaning she seeks by finding a way “always to look life in the face, and to know it for what it is, to love it for what it is. And then to put it away.”

These words, the final voice-over from Virginia Woolf’s suicide note to her husband Leonard which we hear as the film concludes, summarize its view of life. Life can be lived, but only with the realization that it has no ultimate significance, and for those who are not able to live with that fact “it is possible to die”. The poet, the visionary—in The Hours Woolf and the poet Richard, friend of Clarissa’s—is driven to suicide just because his gift for that which most mocks man’s meaningless existence, art, forces them to confront regularly the disconnect between the apparent nobility and value of man and his actual hollowness.

What a true tragedy this film is. Though its distributors put on a desperate campaign to convince potential audiences through its trailers that The Hours was an affirmation of life, the movie seethes and roils, tosses and turns through the lives of three dejected and agitated women, all of whom either contemplate suicide, fail at attempting suicide or actually carry it out. All three are lesbians, but this is almost extraneous to their stories and only highlights their sense of not belonging in the world. At its deepest level, The Hours is a study of life lived from hour to hour in fear and anxiety that man will never find rest, never be at ease in the world as he or she know it. What could be more tragic in a world we know to be significant because He is.

1. What is the role of the characters’ lesbianism in the development of their distinctive characters? Do you think the filmmaker was sympathetic to their lesbianism or not? Why or why not? What does the Bible have to say about sexual orientation? Can one be a homosexual and a confessing Christian? 2. There are two husbands in the film, both played brilliantly as caring, compassionate men. How do they contribute to the angst their wives feel about life? Why is this so? Trying not to attribute blame in a one-dimensional fashion, discuss where the “failures” are in the two marriages. Are you able to do so? Why or why not? 3. There seems to be a connection in the mind of the film’s creators—novelist Michael Cunningham (who declared himself in “an enviable if slightly embarrassing position as one of the only living American novelist[s] happy about his experience with Hollywood”), screenwriter David Hare and director Stephen Daldry—between the homosexuality and suicidal tendencies of Laura Brown and those of her son. Is this accurate? How should we think about that, given the warnings in Jeremiah and Ezekiel against attributing to the fathers the sins of the sons? 4. What is the center of the film’s hope? Is it valid or not? What is the view of the impact of cities on the lives of people in this film? At one point Virginia Woolf characterizes the suburbs where she lives as driving her mad, but acknowledges that to return to the city of London would probably kill her. She opts for the city. Why do you believe she thinks that? How much of a role does New York and Los Angeles play in the development of Richard, Clarissa and Sally on the one hand and Laura on the other? 5. To what extent did you identify with the three women in this narrative? Why? To what extent does your faith alleviate your feelings of alienation in this sad world? To what extent are the issues faced in this film independent of sexual orientation? 6. What feeling(s) were evoked by this film? Are you comfortable with them? How do you think you should respond? Why? If time has passed since viewing the film, how did your feelings/responses change over time? Why do you think that is so? 7. How would you seek to engage these characters with the gospel, if you had the chance to become their friend? How have your non-Christian friends responded to The Hours? Your Christian friends? Compare and contrast this to your own response. 8. “If this progression of the three stories shows anything,” Roger Ebert writes in his review of The Hours, “it demonstrates that personal freedom expanded greatly during the decades involved, but human responsibilities and guilts remained the governing facts of life. It also shows that suicides come in different ways for different reasons.” Do you agree? Why or why not?