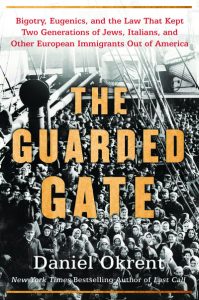 The effort to limit immigration has a long history in America. Beginning in the late 19th century the reasons given were based on eugenics, a pseudo-scientific notion that some races were biologically inferior to the “race” of white northern Europeans. Jews and Roman Catholics, along with all those from southern Europe, Asia and Russia were deemed undesirable. Political leaders worked relentlessly until Congress passed the Johnson-Reed Act of 1924 closing what anti-immigration activists called “the unguarded gate” at the American border.

“Enough! Enough! We want no more / Of ye immigrant from foreign shore / Already is our land o’er run / With toiler, beggar, thief and scum” [p. 68]. The details of Okrent’s story are different from today’s immigration debate, but the xenophobia, fear, disregard for truth, and rank bigotry remain the same. It is to our shame that “the official Nazi Handbook for Law and Legislation would specifically cite American immigration law as a model for Germany” [p. 361].