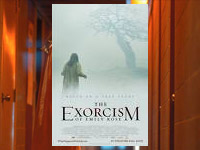 “Mysticism keeps men sane. As long as you have mystery you have health; when you destroy mystery you create morbidity.” — G. K. Chesterton

“What used to be called demon is now called neurosis.” — Carl G. Jung

“There is no pill for the devil.” — promotional ad for The Exorcism of Emily Rose

Confronting the Paradigms of Plausibility
When Jesus says to his disciples, “He who has ears to hear, let him hear,” he is pointing out the simple but sobering fact that we tend to see what we want to see, hear what we want to hear, understand what we want to understand. Facts don’t speak for themselves. They are only meaningful within a given framework and the choice of an interpretive framework will determine which facts are important and what they mean. More often than not, interpretive frameworks are culturally derived. The zeitgeist dictates the boundaries of cognitive plausibility—what is thinkable, say-able, and doable.

For example, to be modern is to accept the premise that public life is to be governed by science and reason, not by religion or revelation. Religion and revelation is the province of a supposedly backward medievalism—or worse, Islamic fundamentalism. Really? We may decry the inherent violence of Islamic fundamentalism, but we must respect their commitment to viewing all of life from within the dictates of theism. The Islamic critique of the West should resonate with reflective orthodox Christians who should also decry the global crusade of individualistic, hedonistic, nihilistic consumerism. They have a point worth acknowledging, even if we disagree with their means and ends. To the extent that we accept the modern dualism that limits religious conviction to the private and personal, we have made religious conviction subjective and irrelevant—a harmless sideshow to things that really matter.

This divide between a modern and pre-modern outlook on life is powerfully depicted in the 2005 film, The Exorcism of Emily Rose. This is a deeply challenging film adapted from an equally troubling true story. Few films more successfully pit a modern naturalistic explanation of reality against its ancient supernatural alternative. Few raise honest questions about both more fairly.

The film is an adaptation of the book, The Exorcism of Anneliese Michel, written by religious anthropologist and Denison University professor Felicitas Goodman. The story is about a 19-year-old pious Catholic German girl who is allegedly possessed by demons. After prolonged medical and psychiatric intervention, Anneliese and her parents turn to their local church for help. After receiving permission from the Catholic bishop, a local priest conducted exorcisms from September 1975 to July 1, 1976, the day Anneliese died. Local authorities then arrested the priest and parents and put them on trial for negligent homicide.

Thirty years later, writer Paul Boardman and writer/director Scott Derrickson took the essence of this true story and turned it into a compelling courtroom drama. The philosophical divide is further heightened in the film by the juxtaposition of a reluctant agnostic defense attorney and a determined Protestant churchgoing prosecutor. Mick LaSalle writes in the San Francisco Chronicle, “Based on a true story, Emily Rose is the thinking person’s demon possession movie, which presents a chilling case history that’s hard to explain away.”

Scott Derrickson is an open, articulate Christian, a graduate of Biola University’s film program. Emily Rose cost $19 million and as of July 2006 has grossed $144 million worldwide. At a time when the average film costs $96 million and is deemed a success if it makes a three-fold return, Emily Rose is a triumph. The release of Derrickson’s next film, Paradise Lost, is due next year.

In an interview with Response, Derrickson explained the purpose of Emily Rose, “A lot of Hollywood films are escapist in their nature. They offer the audience a temporary denial of the difficult realities of life and the darkness that exists in the world. In the horror genre, the great potential of it is that it forces us to reckon with what we are afraid of. It forces us to admit an experience—that there is evil in the world, and in ourselves. There’s evil in nature. We’re not in control. I think it’s the genre of non-denial…. I didn’t want to make a morally instructive movie, and I didn’t want to make a movie that was bent on providing religious answers for the audience, because I am so resistant to that kind of propaganda myself. But I felt that this was the opportunity to help provoke the audience into asking the right spiritual questions.”

Some have questioned the film’s preoccupation with demons. In the film, Father Moore states, “People say God is dead, but how can they think that if I show them the Devil?” While it is true that belief in demons is a long way from belief in God, it is even a longer way from belief in naturalism. For many moderns, the first step toward biblical belief is a renewed openness to spiritual reality of whatever kind—New Age, Gnostic Gospels, pop Kabala or Neo-paganism. Such “re-enchantment” is a step in the right direction. For nothing is deader than the stilted mind that reduces reality to scientific proof. Science has its place, but not as the ultimate arbiter of all reality. Scientism is not science anymore than pornography is sexuality.

In the modern world, seeing is believing and believing is dependent on empirical proof. Anything that does not meet these criteria is deemed irrational or non-existent. This creates, in the words of Peter Berger, “a world without windows.”

Not so the ancient world. In the medieval mind, the taken-for-granted assumptions were just the reverse of the modern mind. The incorporeal was more real that the corporeal, the soul of greater importance than the body, the unseen more significant than the seen. Historian Carolly Erickson writes, “Medieval perception was characterized by an all-inclusive awareness of simultaneous realities. The bounds of reality were bent to embrace—and often to localize—the unseen, and determining all perception was a mutually held world view which found in religious truths the ultimate logic of existence.” It was, in effect, a “windowed world.” Which perspective is more biblical? Which is the richer understanding of reality?

Many Christians are quasi-naturalists in practice. The unseen world has little impact on their daily lives. Heaven is a distant place, not their immediate environment. Demons are a metaphor for whatever they dislike, not a personal presence as real as their neighbor. Possession is mental illness, the soul an illusion of DNA. Naturalism has become the lens through which they filter all of life. Dallas Willard warns, “We have heard of psychological ‘projections,’ and our heads are full of pseudoscientific views that reject a spiritual world and insist that space is empty and matter the only reality. So we are prepared to treat all of this long historical record as a matter of ‘visions’ that are ‘only imagination,’ or as outright delusions, not as perceptions of reality. And we slump back into those materialistic mythologies of our culture that are automatically imparted to us by ‘normal’ life as what ‘everyone knows.’”

The prosecuting attorney in Emily Rose challenges a defense witness, the professor who plays the role of the religious anthropologist who later wrote the book on which the film is based, “I’m looking at your list of published articles doctor. You’ve been quite busy, prolific. So, based on your time spent with holy rollers, snake handlers, Voodoo priestesses and Indians tripping on peyote buds, based on your observing these bizarre individuals you’ve concluded that possession is a basic typical human experience?”

She retorts, “I must say counselor, that’s quite a laundry list of disdain and one that thoroughly mischaracterizes my research.”

This sarcastic critique comes from the Protestant churchgoing prosecutor. For him and for many Christians like him, God is relegated to Sunday school, but strictly quarantined by naive secularism from the boardroom, classroom, or courtroom. In Madness and Civilization: A History of Insanity in the Age of Reason, Michel Foucault suggests that madness is a social rather than a medical diagnosis merely reflecting the boundaries of social plausibility. No doubt, Foucault would see demon possession in the same light.

When Christians allow social plausibility to become the perspective by which we interpret reality, we have become blinded by these assumptions and are no longer biblically minded. (This is the adult version of “peer pressure.”) If a film like Emily Rose can serve to remind us that “We wrestle not with flesh and blood, but against the rulers, against the authorities, against the powers of this dark world and against spiritual forces of evil in the heavenly realm” (Ephesians 6:12), then it has provided a valuable service in awakening us to the Unseen Real. As Christians we are called to challenge the paradigms of plausibility—least we be taken “captive through hollow and deceptive philosophies, which depend on human tradition and the basic principles of this world rather than Christ” (Colossians 1:8). Some may think about demons today, but rarely with godly seriousness. They are domesticated by J. K. Rowling and used as a marketing ploy by Pirelli Tires. We would be wise to heed the priest’s warning, “Demons exist whether you believe in them or not.”

1. Seel suggests that “The zeistgeist dictates the boundaries of cognitive plausibility.” What is cognitive plausibility? Does plausibility make something true? Does majority opinion make something true? Does majority opinion make something more believable? How does this work in day-to-day life? 2. What are the two world views depicted in Emily Rose? How are they reinforced throughout the film? 3. Derrickson is a Christian, but the other screenwriter, Paul Boardman is not. Is the film successful in maintaining a fair depiction of the two world views portrayed? 4. Does the film successfully raise questions about the possibility of a spiritual world without preaching? 5. What questions were you left with at the end of the film?