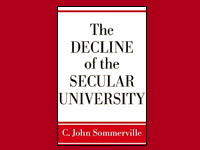 There are, to over-generalize only slightly, three basic ways of understanding the relationship of religion to public life. First, there are those who believe their particular worldview is true and should therefore be established in schools and government agencies. Second, there are those who believe that religions and worldviews are a matter of personal preference, and that there exists some sort of viewpoint-neutral public reason that transcends and rightly relegates religion to a private sphere of life. Third, there are those who believe that there is no such thing as “a view from nowhere,” that secularism is no less neutral a perspective than other “traditions of inquiry,” and that true neutrality consists of equal accommodation of all particular viewpoints, including both the religious and the secular.

Whereas the first view was dominant in the pre-modern West for a millennia or so, and the second, modernist view has been dominant in courts, media, and universities through the twentieth century, the third view has been gaining more—and more articulate—voices in recent years. With the publication of The Decline of the Secular University, C. John Sommerville joins these voices.

According to Sommerville, “the secular university is increasingly marginal to American society and this is a result of its secularism.” Laments over the secularization of the modern research university are nothing new. Sommerville, however, is saying something different, something much more interesting. His argument is that the modern research university’s marginalization of religion has been bad for the university. He is “more interested in the university’s loss than in any loss that religion has sustained.”

The book is concise yet wide-ranging. Twelve short chapters are focused around a series of big—very big—questions. What is the status of the human today? Don’t all professional programs serve some idea of human optimality? Is there really a philosophical justification for the fact/value dichotomy? How does the university justify the moralizing that still dominates the humanities? Isn’t it time to start studying about secularism, instead of just indoctrinating students in it? Why is intellectual fashion replacing seasoned argument in the university itself?

Although some will criticize Sommerville for taking on so much in such a small book, they will have missed his point. We should not shy away from the big questions, he is saying, simply because they cannot be dealt with comprehensively. Indeed, the groundwork for this volume lays elsewhere—in the scholarship of Stanley Hauerwas, George Marsden, John Milbank, Alisdair MacIntyre, Warren Nord, Alvin Plantinga, Christian Smith, Charles Taylor, and in Sommerville’s own work on secularization. The present volume may be described as a readable and forceful distillation and application of this larger body of literature.

Sommerville makes good (and entertaining) use of a variety of sources, quoting Will Willimon that the “vision of higher education as a place where the young are initiated into the wisdom of the past has turned into a place where the old abandon the young to their own meager resources because the old have nothing of value to say to them,” David Kirp to the effect that the “incoherence about what knowledge matters most has become pervasive in higher education,” Clark Kerr on his assessment that universities have “no great visions to lure them on, only the need for survival,” and Neil Postman who once quipped that “without a purpose, schools are houses of detention.”

The author is able to turn a phrase or two himself. Departments of religion that aspire merely to teach about religion in general have failed, he writes, because there is no such thing as religion-in-general. “It is rather like learning Language without learning any particular language.” Many academics, he says, treat religion “like a birthmark we all try to ignore.” Elsewhere he suggests that what is needed is not merely more tolerance between religious and secular viewpoints, but more interpenetration. “If our universities are to become more than professional schools, their rationalism needs to be in dialogue with other ‘traditions of inquiry.’ For the most important matters in life include such matters as hope, depression, trust, purpose, and wisdom. If secularism purges such concerns from the curriculum for lack of a way to address them, the public may conclude that the football team really is the most important part of the university.”

Thoughtful Christians need not agree with everything Sommerville says. For a very different perspective, for example, see D.G. Hart’s The University Gets Religion. And specialists will have their quibbles. Historians will want more footnotes, philosophers more precision, and sociologists more jargon. But never mind. Sommerville is intentionally resisting the temptation to write only for his colleagues, and the book is better for not having catered to these criteria.

My own quibbles include the following. First, although Sommerville helpfully distinguishes between secularization (“the separation of religion from various aspects of life and of thought”) and secularism (“an ideology that seeks to complete and enforce secularization”), I would have liked to see a comparative distinction between the “soft secularism” of the United States and the “strong secularism” of say France. Second, although Sommerville lays some of the groundwork to argue that the sexual carnival depicted in Tom Wolfe’s I am Charlotte Simmons is a logical extension of secularism, he never connects the dots. Third, Sommerville speaks of “the university” as if it were a personal, moral agent. But just as there is no such thing as religion-in-general, there is no such thing as the university-in-general. Decisions are ultimately made by persons, and it is not entirely clear how administrators who agree with his critique should begin swimming upstream against the current of campus culture. Finally, I fear Sommerville will lose some readers and end up preaching only to the choir for having thrown in the kitchen sink. In commenting that “most students’ last brush with history was a course taught by a coach,” Sommerville fails to avoid the sarcasm that plagues so many critiques of secular liberalism.

Quibbles aside, this is a very good—and very important—book. To those of us involved in the Christian Study Center movement, he is singing our song that the marginalization of religion impoverishes campus discourse, and that one key to reinvigorating campus discourse is acknowledging particular traditions of inquiry. This is not a coincidence, as Sommerville himself is an active member of the community of Christian scholars at the Christian Study Center of Gainesville. Noting that the anti-religiosity of universities too often has been answered by anti-intellectualism in churches, he puts in a word for study centers more generally. “Healing might begin in the Christian study centers formed at several universities, where faculty and students sharpen their sense of what religious perspectives have to offer to the stalled debates on their campuses. They might foster the virtues of humility and respect that could be recommended to the university generally.”

If Sommerville is right, and I think he is, then there are not really three distinct views of relating religion to public life after all. The view that there exists some neutral perspective that transcends religiously grounded reasoning is really a variation of the view that one worldview is self-evidently superior to all others and therefore worthy of establishment. It is what Marsden has called established non-belief. “We can’t even discuss the concepts of wealth, justice, sanity, truth, the human, and the humane,” Sommerville writes, “without finding their irreducibly religious dimensions. For all of these involve the question of what human life is all about, of what would be optimal for humanity. Naturalism is silent on these subjects. A century ago it seemed reasonable to restrict the university to questions we could answer definitively, to everyone’s satisfaction. We are now finding that this leaves out too much.”

At a time when there is a lot of talk about theocracy, one might point out that theocracy can be understood not only as a religious, but also as a secular phenomenon. And what is needed is disestablishment of the secular theocracy in our public universities.

As Robert Wuthnow put it: “John Sommerville has written a valuable book that calls universities to task for their narrowness in addressing the big questions of what it means to be human, how to understand history, and what to think about difficult moral issues. He suggests as one possibility that academics reconsider the role of religion. This will strike many as a novel idea. They are the ones who especially need to read this book.” Indeed.