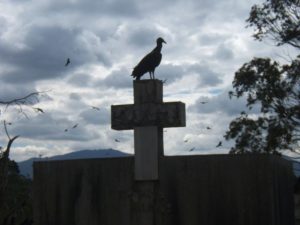 Christians relate to the Lord differently. The variety of Protestant denominations and the numerous subgroups within Roman Catholicism point to different theological accents and emphases. But they also point to differences of personality, style and life experience.

For the past several years I’ve related to the Lord primarily through reflection on the cross. Christ’s crucifixion is a historical event, long past and beyond definite archival reach. But I’ve also come to see the crucifixion as an ongoing, eternal event—present from the beginning of time (Revelation 13:8) and repeated every day (Hebrews 6:4). In a sense, it’s something I can participate in (Philippians 3:10). This focus has been accompanied by a deepening to commitment to practicality and to a personal emphasis on works done in Jesus’ name. One bears a cross to relieve another’s.
The scriptures are clear that we are reconciled with God by faith through grace. They are equally clear that Christian commitment absent works that make practical differences in people’s lives isn’t Christian commitment. I don’t see how anyone could walk away from the parable of the sheep and the goats, or read the book of James or the writings of second-generation Christian leaders and have a different impression. “If we prove ourselves good citizens of His here [on earth],” Polycarp wrote to the Philippians in the second century, “we shall reign with him hereafter, if we have faith.” Faith and works together.
My thinking about the omnipresence of the cross began several years ago as I considered the meaning of the long and fascinating, but also agonizing, process of evolution. I began to conceive of Jesus’ death on the cross as related to the pain of the whole groaning world (Romans 8:22), for suffering is as central a theme in nature as it is in scripture, though obviously it’s not the only theme. This thinking carried into my reading of more than 100 war memoirs and diaries, where references to the cross abound. It was further deepened in Guatemala, where one sees inexplicable suffering foisted on children, among others. One sight—large crosses with vultures perched on them standing watch over hundreds of people scrounging a living from a trash dump in the valley below—was as apt as it was horrible.
My considerations of the cross’ ever-presence were sustained by things seen and experienced in Joplin, Missouri, which was ravaged by a tornado in late May of 2011. On three of my four trips to Joplin I made little crosses from debris, partly because I wanted mementos, but mostly because I felt that doing so put me in touch with some meaning that, though out of reach, was still discernible in the spirit.
I’ve seen glimmers of the cross all around, for everywhere there’s beauty alongside ugliness, wisdom alongside foolishness, light and obscurity. I see it in the wonderful human impulse to shape nature, and also in the unwise insistence on lush green yards in times of severe drought. I see it in the ugly vultures that soar over a flea-infested slum at the edge of the dump in Guatemala City, and also in the perseverance of the faithful Christians who live there. I see it in the efforts of my colleagues who are always thinking of ways to reach their students, but also in the endless stream of energy-sapping initiatives cooked up to feed the insatiable Moloch of the education industry. I see it in the random violence of the Joplin tornado, and also in the way the nearly destroyed trees, refusing to give in, have sprouted new leaves.
When I was young my mom warned me away from crucifixes because “Jesus isn’t on the cross anymore.” That’s true, and I think that in some way everything good and beautiful proclaims this truth. But in the offices nearby, there’s frustration. In the grass I walk on there’s insect warfare. A wave of personal unraveling is sweeping across my community. A Guatemalan friend of mine spent three days standing on a beach waiting for the body of her friend’s son to wash ashore. It never did. Somehow, from those depths, she still lifted her voice to the Lord.
The glory is always glorious, and the nails are always driving. Both. It’s unending, until the end.
We learn en route if we pay attention.
Copyright © 2011 Preston Jones