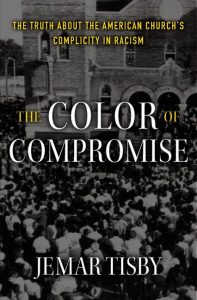 Some of our stories are so grievous, so unpleasant, so full of duplicity and heartlessness that my impulse is to keep them hidden. But they must be told if there is to be repentance and if we are to see the path that can lead us out of the thickets we weren’t aware have kept us captive. They must be told if those who have suffered are to be named and known and granted at long last the dignity they deserve. They must be told if we are to take seriously the truth of the gospel and the glory of Christ’s church. The Color of Compromise tells such a story, and it is a story that I as a white American evangelical need to hear not just with my ears but with my heart. If you are a white American evangelical you need to hear it too.

As his subtitle suggests, Jemar Tisby, president of The Witness, tells a very sad story—The Truth about the American Church’s Complicity in Racism—but it is not a hopeless one. Animated by grace and the power of the gospel The Color of Compromise calls us to live as if we really believe what the Bible proclaims so that in that faithfulness we can begin to flourish as God intends for his people.

After reviewing the history of the American church’s complicity in racism from the nation’s founding to the present moment, Tisby concludes with a chapter of practical suggestions of where we can go from here. “This much is clear,” he says in conclusion,

the American church has compromised with racism. Countless Christians have ignored, obscured, or misunderstood this history. But the excuses are gone. The information cannot be hidden. The only question that remains is what the church will do now that its complicity in racism has been exposed. In the Bible, James 4:17 says, “If anyone, then, knows the good they ought to do and doesn’t do it, it is sin for them.”