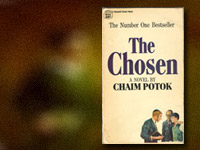 Perhaps you can tell by the worn cover of this book that The Chosen is a favorite of mine. I’ve had this copy since I was in junior high, evidenced by the hesitant cursive on the first page announcing my maiden name. This is a book that has grown with me; I go back to it every year as to an old friend, and when I do, the story doesn’t feel stale or predictable, rather it recaptivates me and offers new perspectives.

The Chosen, which is Chaim Potok’s first novel and perhaps one of his best, opens at a softball game. Reuven Malter, a young Jewish boy, along with his Orthodox classmates, is preparing to play against the winning team of another neighborhood league, a group of Hasidic boys in traditional garb and long earlocks that dangled and curled on either sides of their cheeks. Set during World War II, the boys were playing ball as a form of exercise and a show of patriotism, even though such games would normally be considered frivolous and a distraction from their religious studies.

There is very little love lost between the two teams; Reuven’s team considers the Hasidic (pronounced Ha-SEE-dic) boys unnecessarily fundamentalist while they are seen by the Hasids as unforgiveably worldly and worse than Gentiles. The game proves to be more difficult than Reuven had anticipated, and there is one member of the Hasidic team who unnerves him: Danny Saunders, the son of a Hasidic rabbi. Danny plays with a ferocity fueled by hatred, and he ends Reuven’s participation in the game by hitting one of Reuven’s pitches so hard it hits Reuven in the face, breaking his glasses and embedding a piece of glass in his eye.

Reuven spends the next several weeks in the hospital, seething with anger and waiting to find out if his eye will heal or if he’ll end up blind. When Danny himself shows up at the hospital, Reuven at first rejects any notion of forgiving Danny for what he sees as a deliberate act of hostility, but at the urging of his father, Reuven softens and an amazing friendship is born.

When I first read this book, I was fascinated by the details of Jewish life and by the different responses to the atrocities commited by the Nazis. Reuven’s father threw himself into the political answer of creating an independent Jewish state, while Danny’s father vehemently opposed such an idea, wanting instead to believe that the concentration camps were part of God’s mysterious plan. I greatly admired the boys’ intellects and wanted to be as studious and promising as them, to be able to lose myself in hard work. As I grew and re-read the book, I wrestled with Danny’s difficult relationship with his father, unable to understand why a father would choose to raise his son in complete silence. It seemed to me that the intense pain this caused Danny was enough to condemn his father’s choice. Now that I am an adult, I see how Potok’s book has helped to inform my belief that suffering can be used by God to create a beautiful soul. Now I marvel at Potok’s easy writing style, the way in which his prose serves the story and never gets in the way.

This is a book of friendship, suffering, and the joy of perseverance. It opens new worlds to the reader and challenges our perceptions, not only of ourselves and our friendships, but of our ability to make sense of the world’s brokenness. Appropriate for younger ages, but complex enough for adults and an excellent book for group discussions.

1. What did you learn about the Jewish faith and traditions? What was exemplary about their faith? Did you have any ideas or perceptions about Jews that Potok’s book challenged?

2. As the boys’ fathers responded to the aftermath of WWII, who did you understand better, Reuven’s father or Danny’s? Why? Which response do you think you would be most drawn to, if you had been in their shoes? Can you understand why their difference of opinion was so bitter?

3. Do you see any similarities between Reuven and Danny’s sects and the different factions of Christianity? Are there any issues that have similarly divided the Christian community? How have you (or your church) responded to the division?

4. When I discussed The Chosen with a book club, someone suggested that Danny and Reuven’s friendship was homoerotic. Do you agree or disagree with this? Why? Do you think the homosexual community has changed the way in which we view same-sex friendships? If so, how?

5. Have you or a friend ever been told by a parent to stop speaking or associating with someone? Did you understand at the time why this demand was made? How did you respond? Now that you’re older, and perhaps with children of your own, has your perspective on this changed? Would you ever make your children abandon or make new friends? Why or why not?

6. Did you understand Reb Saunders’ decision to raise Danny in silence? Why did he make this decision and how did it ultimately affect Danny? Do you think it was a wrong decision? Does Reb Saunders’ understanding of suffering differ from yours? If so, how? In what ways are his views biblical? Unbiblical?

7. What did you think of David Malter’s parenting style? How did it differ from Reb Saunders? What types of things did he want Reuven to learn? Do you think he was a good father?