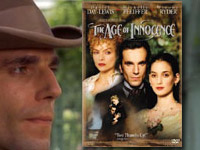 In The Age of Innocence, Martin Scorsese (the well-known director of Taxi Driver, Raging Bull, and Goodfellas) has made a film pitting expectation against desire, the norms and presumptions of a society against the freedoms and loves of the individual. An all-star cast including Daniel Day-Lewis, Michelle Pfeiffer, and Winona Ryder in starring roles, and such luminaries as Miriam Margolyes, Richard E. Grant, Jonathan Pryce and Alec McCowan in supporting roles and Joanne Woodward as the narrator, move through the drawing rooms and thirteen course meals of a society that, as the film’s narrator describes it, is “a hieroglyphic world where the real thing was never said, or done, or even thought.” Privileged, old New York has strict rules for every conceivable behavior—the time one arrives at a dinner party, the conditions under which a woman leaves a conversation with one man in order to seek the company of another, the length of an engagement period—all are ordered according to a code complete obedience to which is never commanded, rarely requested, but always expected. The way in which this tightly organized community intrigues to frustrate individual love and personal liberty forms the substance of the story.

As the film opens, Newland Archer (Day-Lewis), a New York attorney of the 1870s, is engaged to May Welland (Ryder), the epitome of that society: wealthy, beautiful, elegant, and completely captive to the customs and mores of the tribe. Enter May’s long-absent cousin, Countess Ellen Olenska, played flawlessly by Pfeiffer, who sometimes intentionally, more often unintentionally, flaunts New York’s traditions, and wins Archer’s heart by appealing to that side of him that detests the bonds of a horribly repressive society, ruled over by social gatekeepers who make or break reputations, and with them, fortune, family and, ultimately, personal happiness. The struggle Newland and Ellen have to find a place for their love for each other and yet maintain relationships with their friends and family in the society provides the psychological backdrop for the plot of the film.

The subtle interweaving of the themes of desire, responsibility, societal ordering, and personal happiness, supported by a rich and succulent symbolism, make this Scorsese’s most impressive film to date. The power of the desire that Newland and Ellen feel for each other is matched against the strength of the threat the tribe feels to its survival, and the struggle between the two creates a tension that propels the viewer through two and a half hours of non-action (meals and afternoon visits make up the bulk of the “action” in the film) without even a glance at one’s wristwatch.

This is a film rich in texture and elegant in detail. In every aspect of filmmaking, the picture is a triumph. The performances are flawless; the direction, cinematography, and editing are superb; even the classical score, arranged by perennial Academy Award nominee Elmer Bernstein, describes a world where everything is form and nothing substance. The drawing rooms filled with overstuffed chairs, the walls crowded with art, the fashionable women at an archery match in their full length white lace dresses, the men after dinner, neatly clipping the ends off their cigars —all are filmed in tableau fashion like paintings from John Singer Sargent or Mary Cassatt.

Martin Scorsese is famous for his camera movement; with a few notable exceptions, he rarely lets the eye rest, creating a frenetic pace in most of his movies and emphasizing the need in modern man to keep moving toward the future lest the past, containing only shattered dreams and hopeless strictures, catch up and drown one in its meaninglessness. In this film the camera for the most part lingers, a hand, a flower, a dining room table defining a past that in its insecurity and hopeless tribal legalism kills the only thing in which man in his condition can dare to hope: individual passion set free from the expectations of society. Sadly, what Scorsese, and modern humanity with him, have lost is the understanding that, though our laws, and perhaps particularly our social norms, are often poor reflections of the Law that governs our universe, it is nevertheless that Law that makes our individual freedom meaningful. We shun it in favor of the fulfillment of individual desire only at our deepest peril. We risk all meaning and the deep satisfaction that comes from doing what is right, though it may be painful, in order to find pleasure for a season. Is it worth it?

1. What was your initial or immediate reaction to the film? Why do you think you reacted that way? What was it in the film that prompted that reaction? 2. What is the message(s) of the film, or view of life and the world that is presented in the story as it unfolds? Consider how the film addresses themes such as: the nature of reality or what is really real; what’s wrong with the world and what’s the solution; the fragmentation of life in our busy, pluralistic world; the significance and meaning of relationships and love; the significance and meaning of being human; whether there is right and wrong, and how we determine it; the meaning of life and history; and what happens at death. 3. What is attractive here? To whom? How is it made attractive? 4. Where do you agree? Where do you disagree? Why? In the areas in which we might disagree, how can we talk about and demonstrate the truth in a winsome and creative way in our pluralistic culture? 5. In what ways were the techniques of film-making (casting, direction, script, music, sets, action, cinematography, lighting, editing, etc.) used to get the film’s message(s) across, or to make the message plausible or compelling? In what ways were in ineffective or misused? 6. Most stories actually are improvisations on a few basic motifs or story-lines common to literature. What other films come to mind as you reflect on this movie? What novels or short stories? What Scriptures? 7. With whom did you identify in the film? Why? With whom were we meant to identify? Discuss each main character in the film and their significance to the story.