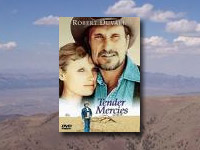 Mac Sledge, former country singer and current alcoholic, is in need of restoration—personal, vocational, relational. After landing at the bottom of the bottle, Mac ends up working at a desolate gas station/motel, where he meets Rosa Lee and her son “Sonny.” Tender Mercies tells the story of these three people, how they learn to live together, how they learn to love each other, how they learn to change each other. More than that, Tender Mercies tells the story of its viewers, who have all lost, who all need love, and who are all looking for tender mercy.

1. What is your response to the film? 2. Robert Duvall won a Best Actor award for his portrayal of Mac Sledge; do you think he would win for a performance like this today? Why or why not? 3. How does the filmmaker use landscape and music as part of the film? 4. What is your reaction to the dialogue in the film? Why do you think the director has the camera on one scene as the dialogue comes from a setting out-of-frame? 5. Near the beginning of the film, when Mac is still drinking, what good qualities do you see in him? What do you think prompted him to start drinking? What reasons do people often have for depending on alcohol? Are there reasons below the reasons? 6. In the first church scene, the pastor says to Mac, “Where were you baptized, Mr. Sledge?” Assuming this is their first interaction, what do you think about the question? Mac replies, “I haven’t been baptized,” and the pastor says, “Well, we’ll have to work on you.” Discuss this interaction. 7. Much of the dialogue in the film is straight-forward, even blunt (think of the proposal). Do you think it’s realistic? Do people speak like this today? How so or why not? 8. Why is Mac so unwilling to talk to the reporter? 9. When Mac left the house for a long time, what kept him from drinking again? Depending on your answer, what, do you think, enables people to change, especially in the face of addiction? What part do people play in the process? 10. Why do you think Mac returned home? 11. Right before Mac pulls into the driveway, Rosa Lee is praying, “. . . for thou art the god of my [mac drives up] salvation; on thee do I wait all the day.” What does this reveal about the way that Rosa Lee views both God’s and Mac’s role in her life? If you believe in some God, how do you view your spouse in relation to him/her? Depending on your answer, how does that affect the way you understand your relationship to your spouse (and you to your spouse), and your view on fulfillment and joy in marriage? 12. Do you think Mac’s baptism was genuine? How did you respond to the conversation in the truck on the way home, when they said they didn’t “feel different yet”? Throughout the film, we hear this refrain from a song: “. . . it hurts so much to face reality.” How does this mirror the characters in the film? How does this mirror your life? Does the film offer remedy for this hurt? If so, what? If not, is there help? What keeps people from facing reality; what do people to do to avoid reality? What enables people to face reality? What are the repercussions for refusing to face reality? 13. After Sue Anne’s death, both Mac and Dixie ask, “Why has God done this to me?” How did you respond emotionally to their pain? To their question? To whom were they asking this question? Later, Mac says he has prayed to know why he lived and Sue Anne died, but he says he gets no answers to his prayer. After receiving no answer that satisfies him, Mac proceeds to say that he has “no answer to nothing.” How are these two things connected? 14. Mac also questions why he ended up at the gas station and Rosa Lee married him; he wonders if there is a reason that happened. How are these questions related to the others? Do you think his questions are legitimate, and do you think he’ll find answers? If so, how, and what? If not, why not? 15. Finally, Mac says, “I don’t trust happiness. I never did; I never will.” Why does he says this? Is he right to distrust happiness? Why or why not? 16. Can another person “be our salvation”? 17. What is the significance of the title? Discuss Rosa Lee’s treatment of Mac in his process of change. 18. We see nothing outwardly dynamic or sensational about Mac’s change, and, despite the subtle scene at the end, we are not guaranteed a “happily ever after.” How does the movie leave you thinking about what has happened in these people’s lives? Would you have preferred for things to be more dynamic? Why or why not? Do you think this story is an accurate picture of reality?