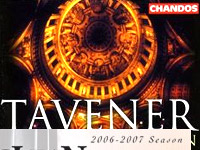 Born in London in 1944, John Tavener is a graduate of the Royal Academy of Music whose music openly embraces Christian spirituality. His compositional style is a pairing of medieval counterpoint (drones and chant-like melodies) with ecstatic outbursts of radiant chords held by full orchestra and chorus.

For many years Tavener served as organist and composer in a Presbyterian church, but in 1977, Tavener entered the Eastern Orthodox Church. He said, “It sounds very extreme, but I think sacred art has gone downhill since the Middle Ages…however impressed I am by Michelangelo, the simple Greek peasant icon means much, much more to me. Or to give a musical example, I’m deeply moved by the very simple harmonic music they sing at the Russian Orthodox cathedral.”

Tavener exemplifies a growing fascination with the differences between Western and Eastern approaches to composition. The Western linear approach is to develop the musical themes as they go through time. The Eastern circular approach meditates on a musical idea without much development over the course of the piece. Like an icon, there is no directional movement, development, or expression of dramatic time.

So it is with Tavener’s recent composition and world premiere recording of Fall and Resurrection. In it, Tavener “tries to encompass the events which have taken place since the beginning of time, and before time.” Quite a goal for a 67 minute work! But for the Christian, it is possible to encapsulate the impossibly complex work of God in the words “creation, fall, and redemption,” or as Tavener’s work is formed: Paradise and Catastrophe, Prediction, Incarnation of the Logos, and finally, Dance of Resurrection.

Tavener’s compositional language is sparse and minimal. The texts he chose (by Mother Thekla) are distillations of the biblical story and become a moment suspended in time. For example, the entire paradisal relationship between Adam and Eve is summed up in their repeated lines:

These lines are compelling, especially when set to Tavener’s haunting melodies, beginning with a rising interval of a major sixth followed by a half step, done antiphonally, as they echo each other in what can only be the bliss of their unfallen relationship.

Into paradise enters the serpent in the guise of an untrustworthy saxophone, playing a line with slithering half-steps trilled then chromatically descending and ascending again, while the man and woman sing lines that seem to be choked with apple pieces in their throats, bending pitches and forcing stutters. The only words sung by Adam and Eve are “apple tree.” The weight of the catastrophe is then made all the more horrifying by a blown ram’s horn. Chaos follows while the chorus repeats, “Knowledge Divine” and “I am God.” After the fall, Adam sings, “Eve! What have we done? Who are you? Who am I? Who is God?”

Now that the rebellion has occurred, the wisdom the serpent promised has come, but in the worst possible way, namely, by the experience of evil. The unforeseen result has been the loss of something they had taken for granted: the intimate knowledge of each other and of God. The ache of these questions has haunted husbands and wives ever since, even though marriage is the most intimate relationship we can have with another human being. Later, the two, barred from the
garden, sing simply:

Adam: I must clothe Eve.
Eve: I must feed Adam.

In these two lines one hears something of the selfless love they once had and the resignation to life in a fallen world: there is work to be done, work that is at once futile and necessary. The simplicity of this captures the tragedy all the more painfully—perhaps the greatest beauty of minimalism is its understatement. Part one ends with the words, “Paradise lost.”

The next section, “Prediction,” wrings a cry for mercy from Adam and Eve and the chorus, but immediately the question of justice comes to their minds—“How can a man be just before God?” The answer comes in the third section, “The Incarnation of the Logos.” The same ram’s horn announces the Incarnation, and the choir sings “Logos, Logos.” Then, we get a short glimpse of the Magnificat text set to the Adam/Eve melody, once again free and spinning, implying that Mary has something of Eve’s original innocence (in keeping with Orthodox traditions).

Something of Jesus’ life is sung about (healing, teaching, the Last Supper) in between cries for His crucifixion and the text, “We adore thy cross.” Mixing the chronology of the story (non-linear, you see) can be disconcerting, but for those who already know the story it is a powerful poetic device taking all the elements and forcing them on top of each other, each garnering reflected meaning from the others, and finally giving the scene a sort of chaotic, nightmare-like sense one might expect from a fallen world that crucifies its Creator.

Then, in what comes across as one of the most horrible moments, the chorus sings “Crucify Him!” one last time, but perversely to Adam and Eve’s melody from the garden (mocking what humanity used to be), mixed together with the saxophone of the serpent playing the trills from the fall. Then on Him all hell breaks loose.

The last section is the resurrection, with only one word sung, by Mary Magdalene, “Ravoni” (Rabboni), and a tower of sound grows to signify the resurrection, ending with the words, “All is transfigured…” while what sound like the bells of St. Paul’s Cathedral (where the performance was recorded) ring in glory.

It must be said that surely this is a monumental undertaking for a composer if there ever was to be one, and much of what Tavener does is quite impressive. However, the lament of Adam and Eve seems sappy and not in keeping with the lofty, mystical quality of the rest of the work. The final “Cosmic Dance of the Resurrection” with its repeated bells is also a bit of a disappointment, but how can anything that begins with so wild a palette of musical colors, rhythms, and musical ideas capture that moment? It can only try as all great art to find a fresh way to inspire our imaginations to take delight in the moment described.

With so few great works coming out of the Christian church in the last 150 years, it is a great joy to find a composer with Sir John Tavener’s skills writing music that takes Christianity seriously. Works like this will go far to help make the Faith plausible to a jaded post-modern culture. With its Byzantine and Hebrew modes and melodies, and its colorful timbres, this work is worth hearing to expand our ears beyond the major and minor modes most often heard in everything Western from Mozart to Amy Grant.