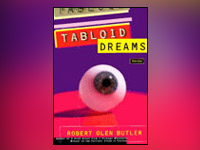 Literature enlarges our being by admitting us to experiences not our own,” wrote C.S. Lewis. “They may be beautiful, terrible, awe-inspiring, exhilarating, pathetic, comic, or merely piquant. Literature gives the entrée to them all.” When I hear these words from a man who not only loved to read but wrote some of the most beloved literature of all time, a thrill goes through me. Yes, I think. That’s it exactly! One of the reasons I read literature is because it opens up new worlds to me, enlarging my own existence and helping me to viscerally understand people in situations vastly different from my own.

The children in C.S. Lewis’s Narnia series had access to a wonderful and sometimes frightening new world through an old wardrobe—sometimes that wardrobe had a wooden back as would be expected of such things, and other times, the coats gave way to snowy tree branches, fantastical creatures, and exciting adventures. I am not so lucky as to have a closet like this, but at least my rooms are lined with favorite books offering entrée into a myriad of different worlds.

When I was younger, many of my evenings were spent curled up under a blanket with my brother and sister, eating hot, buttered popcorn while Mom read to us. Little House on the Prairie gave way to Wind in the Willows led to Where the Red Fern Grows and on and on. There were sword fights and horse chases and families making their way through the wilderness and clashes between good and evil. Although I was an American child growing up in a small Midwest town in the twentieth century, my experiences were not limited by time or space or by my own small life.

Being an avid reader means that I never stop growing. Thanks to Chaim Potok, author of The Chosen and The Promise, I understand something of what it’s like to be a Hasidic Jew and to disappoint your Rabbi father by deciding to become a psychiatrist rather than his successor. Rueven and Danny, the two main characters in these books, started out as enemies, but became fast friends, opening themselves to the joys and sorrows inherent in loving another person deeply, giving voice to elements of yearning in my own life.

Joy Kogawa, author of Obasan, helped me to feel what it must have been like to be Japanese-Canadian during World War II when people of Japanese descent were forced from their homes and sent to internment or labor camps. I also know something of the Japanese culture and how it affects the Nisei and Issei, the second and third generations born in Canada. Looking at history and family and tradition through Naomi’s quiet eyes, I wonder how I could have thought that the American way of approaching life was the best or only way.

Like good movies, books have a way of pushing me out of my comfort zone, of challenging me to think beyond myself. Whether or not I become friends with a Hasidic Jew or Japanese-Canadian, I am filled with compassion for the hardships their people have experienced, and am not completely ignorant of their values, beliefs, and practices.

But what difference does all this make, really? In the end, does it matter whether I understand why the loss of a throwing arm can send a baseball-loving man spiraling into depression (something I discovered in The Brothers K by David James Duncan)? I believe it does matter. The legacy my parents gave me of loving literature isn’t simply that they’ve handed down a nice hobby; no, the worth of literature reaches far deeper than that.

Jesus was a man of compassion —he understood without being told that a leper, bereft of all contact with other humans, would be hungry not just for healing, but for the soft touch of a hand. When Jesus was approached by a leper, the Healer reached out and touched before making the leper’s skin smooth and healthy (Mark 40:41).

Jesus understood that a prostitute’s most meaningful gesture was to use all her hard-earned money on perfume to pour over his feet, using her hair to wipe them. And to help the Pharisees —those obtuse, all-too finite men— understand why he would allow such a gesture, he didn’t give them a talk on doctrine. He told them a story (Luke 7: 36-50)!

Robert Olen Butler, winner of the Pulitzer Prize for his collection Good Scent from a Strange Mountain, consistently surprises me with his fiction. He can write convincingly from almost any point of view: male, female, old, young, Vietnamese, American, educated, uneducated, human, alien. His story collection, Tabloid Dreams, is a strange composite of stories inspired by titles you’d see in a tabloid while standing in line at the grocery store. “Woman Uses Glass Eye to Spy on Philandering Husband.” “Nine-Year-Old Boy Is World’s Youngest Hit Man.” “Boy Born with Tattoo of Elvis.”

These fantastical tales appear at first to be mere extensions of tabloid fodder, yet at the heart of every story is the human impulse to find meaning and love in the midst of broken relationships and mundane lives. Butler, whether he is a Christian or not, is worth reading because he writes truthfully about what it’s like to live in a fallen world.

“Every Man She Kisses Dies” is about a woman (you can probably guess) whose boyfriends die after kissing her. She doesn’t immediately make the connection between their deaths and her kiss, but eventually it’s impossible for her to deny. The first time, she’s in a boat with her boyfriend and after they kiss, he rolls out of the boat and disappears beneath the waves, never to be heard from again. She goes to a baseball game with Frank and “before he could look back to the next pitch, I moved my face toward him and he was ready and we kissed and our lips had barely touched when there was a crack in the distance and then a crack very nearby and his lips lurched hard into mine and slid away. They say the ball rebounded out past second base. Ryne Sandberg made a one-handed catch. Frank would have liked that. But he was dead.”

If the story continued in this vein, simply detailing the ways in which all the boy-friends died, it would be a frivolous story and as shallow as those found in the grocer’s check-out lanes.

But there’s more to it. Butler’s character continues: “There is enough of my daddy’s sense of the world in me to understand after two in a row that something was happening here that was providential. Not that I didn’t test it some more. Not that my own improvised half-theology didn’t cling to the notion of a God who would look on the yearning of a woman and a man to touch and take solace —or even a woman and a woman—any two people who found themselves in the terror and isolation of this life they did not choose— I half imaged a God who would look on such creatures and pity them and love them and try very hard to show Himself in those moments when the two people, whoever they were, were letting go of their own selfishness and fears and faithlessness and trying to find a way to cling hard and long and permanently to each other. And if they failed at that, God would see just the yearning for it as worthy of a gift of all the grace a God could give.”

At the heart of this story is a woman who believes in God, but struggles to separate her preacher father’s legalism from God’s love. As is common in our culture, sex is equated with love, even though the consequences of such intimacy is high.

What would you say to such a person? Would you see only saw the outward actions—the movement from one sexually active relationship to another? To speak of sin would not accomplish anything nor would a speech on the consequences of a sinful lifestyle. As Denis Haack so frequently asks within the pages of Critique, how would you winsomely —and in a way that makes sense to your listener— share your faith?

To be honest, it’s a difficult question that I still grapple with. I can’t arm myself with a memorized answer to all of life’s questions because each person I encounter will have a unique context, different questions, and buried misconceptions about God just as the woman in this story illustrates. Will I have the patience to ask questions first, to look beyond the evidence of sin, to understand the person before me? Will I zero in on what’s really at stake and respond with compassion as Jesus so consistently did?

Reading Butler’s story compels me to think about all of these things while increasing my sense of compassion for someone whose lifestyle I don’t understand. In the words of C.S. Lewis, “Those of us who have been true readers all our life seldom realize the enormous extension of our being that we owe to authors. We realize it best when we talk with an unliterary friend. He may be full of goodness and good sense but he inhabits a tiny world.”