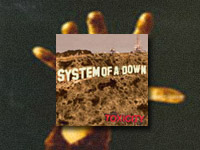 I don’t make a habit of listening to heavy metal music—particularly metal with a decidedly anti-Christian, Green Party, left-leaning bias. But I do try to listen to what’s important to young adults. It’s my calling as a father, educator, and sociologist.

A month after September 11, I was in New York to visit my eighteen-year-old son, Alex, who attends a boarding school there. During our visit he insisted that I purchase System of a Down’s latest album, Toxicity. A month after its September 4, 2001, release, Toxicity went platinum. The record store clerk went on and on with an animated description of the group’s significance as I pulled out my credit card. [Rolling Stone: “smart rock and ardent social argument;” Time Magazine: “band screams loudest and most eloquently.”] For months the CD sat on my desk, unopened. I really don’t like metal.

And then this spring my twenty-three year-old-son, Dave, was pictured in The Washington Post leading an anti-globalization/environmental protest march in Washington, DC. The byline under his picture read, “Dave Seel of Waterville, Maine [Colby College] protests U.S. foreign policy in Columbia as the procession makes its way toward the Capitol on the National Mall.” All of a sudden, System of a Down seemed a lot more relevant. It had become personal. I opened the CD and listened. The words on the first cut, “Prison Song,” caught my attention:

This is not a typical “boy band.” These musicians have something to say.

System of a Down (SOAD) is a Los Angeles group comprised of four American Armenians —Serj Tankian (lyrics/lead singer), Daron Malakian (lyrics/singer), John Dolmayan (drums), Shavo Odadjian (bass). They have released two albums: System of a Down in 1997 and Toxicity in 2001. Raised in L.A.’s “Little Armenia,” the Armenian Genocide of 1915-1923 looms as a large shadow over their personal biographies and consciousness.

In a century of genocide, the massacre of 1.5 million Armenians (many of them Christians) by Turkish Muslims is both the forgotten genocide and the archetype of all that would follow. Hitler would later justify to his top military commanders his quest to rid the world of Jews in August 22, 1939, when he said rhetorically, “Who, after all, speaks today of the annihilation of the Armenians?” This was a quote that would later be repeated at the Nuremberg War Crimes Tribunal. (See Kevork B. Bardakjian’s Hitler and the Armenian Genocide.)

SOAD’s lead singer Serj Tankian’s grandfather was raised in an American missionary orphanage in Armenia after his parents and family were exterminated. “I would not be alive if not for the American orphanages that raised my grandfather after the Armenian Genocide of 1915, so I have a lot of love and respect for the good things that America has and can continue to achieve,” Tankian told CMJ magazine. Religiously inspired hatred and violence is a deeply personal reality for these four musicians. We may forget. They cannot.

SOAD is hard to categorize politically or musically. They are musically genre-bending—seeing metal as a malleable form. An eighth grade student at my school commented, “It’s like combining metal and Opera.” They are sometimes compared to the now disbanded East L.A. political rockers, Rage Against the Machine. But System is far more nuanced. “While Rage was much more in-your-face with their political standpoints, System is able to deliver them in a brilliant, finely tuned way that would get you to give your house to Stalin if they told you to,” writes Mike Hess in Night Times.

System of a Down wants you to think —and to think about things that matter. They are not about single-issue politics or superficial Hollywood activism —but the natural expression of a radicalized consciousness that is critical of hypocrisy and injustice wrapped in red, white, and blue symbols of capitalist greed. “If there is a message to the music, it is ‘Wake up!’ And not necessarily in any political way, but just think freely and think more. It’s like you watch television and listen to the radio and you let ‘em think and choose for you. Don’t be afraid about what someone is going to think about you. The reason why people tell us that our sound is so real and different is because we’re not afraid to do what we like doing. It’s like Serj’s line that says, ‘Free thinkers are dangerous.’ Get dangerous… What satisfies me at the end of the day is knowing that I didn’t conform to the norm. As long as I can stay true to myself and be proud of what I’m doing, then I’m cool. Everything else is just an outside opinion,” singer Daron Malakian told Mean Street Magazine in September.

Their politics is not free-form libertarianism, but the politics of radical ecology. In the song, “ATWA,” which stands for “air, trees, water, animals,” SOAD espouses killer Charles Manson’s ecological philosophy. “The main problem is that people don’t consider themselves as nature,” Tankian remarked recently. In the song, “Forest,” he sings:

Serj acknowledges that he voted for Ralph Nader. “I feel sorry for the universe. I don’t believe in any of those globalist pigs. I voted for the person who would think of humanity and the planet before corporations.” Nor does he have any confidence in science or technology.

System is right, their concern is more than politics. It’s a worldview, a way of seeing reality. Their views represent a loose mix of Rousseauian romanticism, neo-pagan earth worship, and anti-globalist economics. “My belief is that violence in all forms is a low-level human energy output, and undermines our existence as beings of light… All of us are radiant beings with physical temporary shells that seem to define us more than it should. When you listen to music and you are uplifted, the place you go is not physical,” Tankian explains on the SOAD web page. For a far more realistic appreciation of nature and of our responsibility to it, one would do far better to read anything by Wendell Berry.

Christians are as quick to dismiss political differences as religious ones. But there are three themes that we need to hear in System’s message: authenticity, connection, and significance. SOAD is authentic —close to their fans and inured of celebrity status. They haven’t “sold out.” This is a difficult balance to maintain in the music business where pressures for market success are as high as in any multinational corporate boardroom. SOAD is a reminder that there is more to life than the commodity form. Human authenticity demands it.

Second, SOAD longs to enhance connections—between people and between people and nature. In a fragmented world, we have lost all sense of interconnection. This is the meaning of their album title, Toxicity. Christians will disagree with the pantheistic direction of their solution. But we must acknowledge that the reason this solution is so attractive is rooted in our uncritical acceptance of free-market radical individualism (a conservative form of Social Darwinism) that rarely asks the question, “Who is my neighbor?”

Third, System of a Down calls us to live lives of significance. Tankian chides, “We’re not singing about bulls**t, but stuff that matters.” Perhaps this suggests a cultural shift. Edna Gundersen of USA Today writes, “System resists categorization as fringe mascots or single-issue activists. Malakian embraces multiple causes, political, and musical, that he hopes will gain currency as the masses tire of bland entertainment and social decay. The time is ripe for cultural explosion, he says.” It is time to wake up. Free thinkers are dangerous. “In the ’50s, they were singing, ‘Let’s do the twist,’ which isn’t far from singing about sex. We went from the twist to protest songs in the ’60s. We’ve been in a shallow phase, but people get bored by shallow stuff. I think the times are starting to change,” Malakian explained to Gundersen.

I hope so. The starting point of Christian discernment is not to agree or disagree about religion, politics, or music, but to listen for the heart of the other person. This is where human connection begins as well as social change. And so, for Alex, I have finally written this review. For Dave, I sent this email after his brush with fame: “I’m proud of you for taking a stand on matters that matter in a day when youth culture is trapped by its worship of consumerism and entertainment. Justice begins when one asks the question, ‘Who is my brother?’” These are lessons a father can learn from a heavy metal CD.