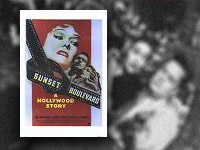 What could possibly cause a fifty-something year old, black and white film to merit discussion in Critique and consideration by Christians for thought about character and commitment? Sunset Boulevard was released in 1950 by a producer who is now dead, written by writers, shot by a director, and acted in by actors who are almost all now dead. Why would we want to exercise the skills of discernment with which God has graced us on an old movie like this one?

There are lots of reasons of course. Never mind those who realize that history is an integral aspect of the truly Christian mind, and that those who rightly believe an understanding of movies and their content to be a key ingredient to comprehending American culture—and therefore our neighbor across the street—will always seek to understand the history of that medium. Put aside the fact that Sunset Boulevard continues to make a difference in the discussion of film theory in the West, and that it ranks high in the American Film Institute’s list of the hundred greatest movies of all time. These reasons, while good enough for many, pale beside the greater reason to rent Boulevard and study it. And that is that Sunset Boulevard is, par excellence, the Hollywood story of the consequences of a web of deceit, based on pride and misplaced glory. As such, it still, as tightly today as it did half a century ago, grips the viewer with its deep truths.

Scripted by Charles Brackett and Billy Wilder, one of the most creative writing teams in the history of Hollywood (A Foreign Affair, The Lost Weekend, Ninotchka), Sunset Boulevard garnered eleven academy award nominations. Though it lost all but two of the races to the equally brilliant All About Eve, Boulevard is probably better remembered than Eve, and certainly better than many of the films that won the best picture award in the 1940’s and 50’s. It is often called Billy Wilder’s best picture (he was the director as well as one of the writers) and is filled with memorable lines that have passed into popular culture today: “I am big. It’s the pictures that got small.” “Wake up, Norma. You’d be killing yourself to an empty house. The audience left twenty years ago.” “No one leaves a star. That’s what makes one a star.” “There’s nothing else—just us and the cameras and those wonderful people out there in the dark…” “All right, Mr. DeMille, I’m ready for my close-up.”

Sunset Boulevard is the story of a down-on-his-luck Hollywood writer who chances upon the decaying mansion of Norma Desmond, an aging silent screen star left behind when the “movies” became “talkies.” The writer, named Joe Gillis and played marvelously by William Holden, sees an opportunity to finger the old lady for some cash and at the same time escape the repo men who are close on his heels. He agrees to stay overnight at the mansion, when invited by Norma, but he has not figured on the strength of her manipulative wiles. She manages to entrap him until he is dependent on her and the luxuries she can afford him, by using tricks ranging from pathetically pleading for help, through offering large sums of money, to simply having her butler move Gillis’ belongings from his apartment to her house without his permission.

The deceitful, maniacally calculating clutches of Norma Desmond may be without parallel in the history of American film. Wilder wanted to cast Mae West for the part, but she declined to play the role of a fading star. Wilder interviewed Mary Pickford but found her far too nice for the role. Eventually he settled on what turned out to be the perfect choice: Gloria Swanson, an actual silent screen star who got left behind by Hollywood at the advent of sound tracks. Swanson claims that the role ruined her for any future roles, that no one could ever think of her again as anyone other than Norma Desmond, and this is not surprising. The character is so powerful, so sad and despicable at the same time, that it is impossible to forget her when one thinks of Hollywood’s portrayal of pride and fading glory.

And that is just the reason the movie is so worth watching today. The clarity with which Boulevard displays several biblical themes is bound to engender good discussion along the lines of conceit going before a fall, being certain that one’s sins will find one out and the horrible, tragic consequences of deceit. A number of films today—Changing Lanes and Signs come to mind—point out how important one seemingly “chance” event in one’s life can be for one’s whole future direction. Sunset Boulevard picks up another related but opposite idea. In Boulevard Norma Desmond’s repeated lies to herself, coupled with the lies of Gillis and Max, the butler (played by Erich Von Stroheim in one of the most extraordinary pieces of casting ever), eventually build a fabric of deceit so strong that, when she is confronted undeniably with the truth, Norma is driven over the edge to madness and murder.

Norma Desmond eerily, chillingly descends “the staircase of the palace” at the end of the movie. This shot, so stylized with news and police men frozen in time while the music and the camera focus on the mad “star,” reveals not only a descent into hell but also an entrance into the real world, a world where she will not be applauded as a star but incarcerated as a killer. Norma has lost her mind completely, and she, the great deceiver, has tricked herself into thinking the news cameras, there to show her to the world as the pathetic, small person that she is, are actually the cameras of the great DeMille, filming a scene of Salome, her “greatest role.” The prescription of Moses and the prophets, captured so well in the warning of Numbers “Be sure your sin will find you out” (Num. 32:23; cf. Isa. 59:1-20; Jer. 5:18-31; Ezek. 21:24), has never been illustrated so memorably.

We have no space to probe all the other ways one can take the via negativa to learn from Sunset Boulevard; the questions below may help those who want to go further. Buy the DVD and study it well, as a disturbing example of how not to live one’s life based on pride and deceit.

1. Joe Gillis and Max, the butler, contribute to the web of lies that ultimately cause Norma’s downfall. How could they have avoided the tragic ending of the picture? At what point in the film is there no turning back? 2. What redemptive characteristics are there in the characters of the film? Discuss each one and think about how they could have acted differently to follow a better path. 3. Billy Wilder was known as one of the most dark and cynical directors in Hollywood; his experience fleeing Nazism from his native Austria helps us understand this attitude. How does it surface in the movie? Is there any hope portrayed in Sunset Boulevard at all? 4. What role does the accolades of man play in the Christian life? None? Limited? A lot? 5. What other Biblical passages or thoughts does contemplation of Sunset Boulevard bring to mind? Why?