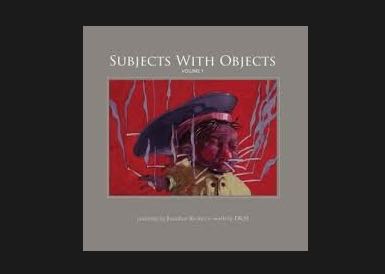 People watching with insight
Jonathan Richter tells us that each of his paintings in Subjects With Objects began with a good beer. With all the heavy agendas weighing down the artist today is it any wonder that a man with a creative impulse would eventually say, “O well, I guess I will just have a beer and make something.” Hoping for simplicity of vision, many an artist has entered a bar. The painter Jan Steen who apparently owned a tavern seems to invite us into this world in nearly every picture. Steen may have lived in a simpler time than our own, the golden age of Dutch painting in the 17th century. He certainly seems to be having a lot of fun making his pictures. In his “Self Portrait as a Lutenist” he is telling us that life is a grand party, so grab a tankard and join in. Jonathan Richter takes a similar stance in his corner booth. As he sips his ale the circus of the human drama unfolds before him.

Jesus tells us that he is most at home among sinners and scoundrels. The more I absorb from the events of the Gospels the more I imagine that Jesus used a lighthearted humor to introduce a redemptive element into the shady places he would enter. Comedy may be one of the only remaining artistic devices still relatively untinged by irony. But doesn’t the jester require more than a colorful stage set? Enter stage left: the playwright walks into the bar. As Richter paints, the mysterious figure DKM sits down in the booth and whispers his take on the farce. Whole acts unfold as we read his short lines and gaze at Richter’s characters.

It is striking, in the supposedly visual age in which we live, how often words come as a blessed relief. Have you been helplessly stranded staring at a perky screen of optimistic colors with no clue how to proceed? Words bring transformation. Below one ambiguous face DKM tells us, “After that, I watched as much TV as I could.” We know this figure and the deep theological insight of the boy holding his scruffy dog who says, “You figure out pretty young that something’s gone wrong and the world hurts more than it should.”

Many a man has felt clever when he first sits down in a bar. But two beers later the hard questions require answers. To salvage the evening one might grasp at some consolation for not really knowing or understanding anything. The magic of art is that illustrates the possibility of understanding without knowing or possessing. A middle-aged woman tells us, “We will always remember ourselves as beautiful.” The great thing about painting is that it can pack eternity into a single moment, almost as if God had finally been captured on canvas. In their collaboration Richter and DKM seem giddy to have discovered this. With one image of a young man holding a piece of fruit, the caption reads, “I am trying to get at something eternal.” This is at once a subtle nod to the history of portrait and still life painting, and at the same time a celebration of innocent insight. Indeed the eternal is among us. At an image of a boy who is kissing a fish, first I laughed at “When I do this, I feel for a moment like everything will be okay.” Then I wondered if perhaps I am allowed to see the fish as the secret IXTHUS. Because Subjects With Objects is a book of art I can choose and so can you, making the secret even more cherished.

Subjects with Objects (volume 1) by painter Jonathan Richter and author DKM (Nashville, TN: Rabbit Room Press; 2013) 116 pages.
To order: Copies of this delightful art book, as well as notecards, can be ordered online at the Rabbit Room Store (www.rabbitroom.com).