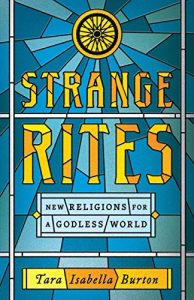 Intelligence Briefing on the World of Religious Nones

To love and respect someone requires understanding their world. This is especially true of those who are spiritually unaffiliated with institutional religion—the religious nones, the spiritual-but-not-religious, the deconstructing, and the ex-evangelical. Berkeley professor Kaya Oakes suggests, “Instead of haranguing and guilt tripping nonbelievers about the loss of their immortal souls, we might treat them with compassion and respect. What if we took the time to actually sit down with them, look them in the eye and listen? Perhaps we would find that in their provoking us to examine our own faith, these nonbelievers are actually among our soul’s best companions.” 1 To this end, we have been given a gift in Tara Isabella Burton’s new book, Strange Rites: New Religions for a Godless World.This is a book that should be read and absorbed by all who are seeking to spiritually engage with the coming generations. It has been a useful corrective to my own thinking about missional outreach to millennials. I cannot recommend a book more highly.

Tara is a religious journalist with a doctorate in theology from Oxford University. She is also New York bohemian and former neo-pagan witch. Her analysis of the emerging open immanent world is not academic but comes from personal experience and loving friendship with her fellow spiritual seekers and sojourners. Tara would have felt comfortable as a member of the Bloomsbury Set—the group of associated English writers, intellectuals, philosophers and artists in the first half of the 20th century. So, her overview of what Charles Taylor calls the “nova effect”—the explosion of different options for belief and meaning in our secular age—has the authenticity and sensibility of a participant observer. Like a good cultural anthropologist, she does not overlay her analysis with judgment or critique, she simply allows these various spiritually longing voices speak. Nor does she wrap up her analysis with a pretty optimistic bow. She remains solidly within a descriptive social scientific posture.

This fact will be inevitably frustrating to Christian readers of her book, particularly among those who know that she had subsequently come to genuine Christian faith. But her discipline of listening without comment is actually evidence of her respect and compassion for her many friends who remain within the bohemian world of her immediate past. It lends itself to the gravity of her message about the spirituality of this world.

Burton speaks of young people within this space as engaging in a “remixed spirituality.” The story of the religious sensibilities of a whole generation aren’t rejecting religion, but rather remixing it. She writes, “Today’s Remixed reject authority, institution, creed, and moral universalism. They value intuition, personal feeling, and experience…. They prioritize intuitional spirituality over institutional religion.” 2 Her “Remixed” are those I previously described as “New Copernicans.” This is a world filled with spiritual longing and eclectic religious pilgrimages. “It is about the Americans who don’t know if this is all there is, or what all means, or there, or even is. It is about our quest for knowing, for belonging, and for meaning: the pilgrimage none of us can get out of.” 3 This is not a group or sensibility that the church can meaningfully ignore, as it represents 40 percent of young people today. But more to the point, everyone is today influenced by this remixed sensibility. She concludes, “We may not all be Remixed, but we all live in a Remixed nation.” 4

Christian colleges may want to attract “convictional Christians,” but they will find both that this a shrinking market and that even “convictional Christians” are going to be influenced by the remixed sensibility. Increasingly, the church is going to have to engage the spiritual but not religious, faithful nones, and religious hybrids. At least half, if not more, of Americans fall into one of these categories.

A central characteristic of this remixed spiritual sensibility is its commitment to intuition. External authority is replaced by personal authenticity. A question that could have easily fallen off the lips of Zarathustra is “When we are all our own high priests, who is willing to kneel?” People make up their own personalized spirituality. Oakes observes, “Instead of cleaving to one particular way of believing, many younger people engage in a kind of spiritual mix and match, blending many traditions and adhering strictly to none.” 5 The epistemological spiritual trump card here is authenticity, personal feeling, and lived experience. This is a pretty widespread core tenant among remixed spirituality.

In Burton’s analysis this is not a uniquely postmodern phenomena as it has its roots in America’s religious past. American religious history shows a pendulum swing from the institutional to the intuitional. Throughout American history we have had two strains of intuitional religion: the pluralistic bohemian and the evangelical. The left had Leary and Ginsberg and the right Billy Graham and Pat Robertson. The individualized, subjective, experiential faith expressions of Christian evangelicalism generally reinforce this intuitional, anti-institutional, approach toward religion. But it may be that the “pendulum” has now gotten stuck in the intuitionist mode.

There are cultural and structural factors that explain why today’s godless world may be different from the past. There is no social support for institutionalism as a consequence of pluralism, travel, and decline of marriage and children. So, there is little to get the pendulum to move in the other direction.

In addition to this there is widespread acceptance of consumer capitalism with its assumption that I can create reality on my own terms. Burton writes, “Meaning, purpose, community, and ritual can all—separately or together—be purchased on Amazon Prime.” 6

And finally, there is the Internet, which has enabled everyone to find a community with their own personalized tribe. “The Internet has made it possible to transcend old identity markers—institutionalized religions, national, ethnic, or parochial identities—in favor of the new.” 7 So the pressure against institutionalized religions is likely to remain a constant for some time. This shift is about climate not weather.

Burton explores the fan culture, wellness movement, the rise of witches, and the ways all of this shows up sexually. Together they reinforce the themes of self-care, self-empowerment, and embodiment.

She ends by outlining three dominant social imaginaries of the Remixed shift: social justice, techno-utopian, and atavistic masculinity. She frames all as serving in a religious function and all ultimately reinforcing the self and meaninglessness. We have spiritualized the experience of longing, but not the object of our longing. She concludes, “We do not live in a godless world. Rather, we live in a profoundly anti-institutional one, where the proliferation of Internet creative culture and consumer capitalism have rendered us all simultaneously parishioner, high priest, and deity. America is not secular but simply spiritually self-focused.” 8 The result is a paganism of spiritualized narcissism. The open immanent spiritual search turns out not to be a spiritual pilgrimage across a liminal space as much as an inward-directed paralysis of self-divination. Of this Chesterton warned, “Of all conceivable forms of enlightenment the worst is what the people call the Inner Light. Of all horrible religions the most horrible is the worship of the god within…. That Jones shall worship the god within him turns out ultimately to mean that Jones shall worship Jones.” Our spiritual answers are not to be found down and in, but up and out. “Christianity came into the world firstly in order to assert with violence that a man had not only to look inwards, but to look outwards, to behold with astonishment and enthusiasm a divine company and a divine captain.” 9 In the end, we need to worship something more than Jones, something more than myself.

This book is a snapshot of a much longer movie about its author. It ends just prior to the end of the second act. Act two ends the moment your character suffers the worst loss imaginable. Blake Snyder calls it “the dark night of the soul,” but I prefer to just classify it as the “Oh crap” moment. For some it comes on suddenly, for others it is a slower gnawing realization. The second act is super important in a film script and does your story’s heavy lifting. It’s where you get answers that you pose in act one and get to ask more questions that can pay off in act three. And so, the incompletion of act two in Tara Isabella Burton’s narrative will leave the reader with a haunted sense of wanting more. Whether this is by design or because of the vicissitudes of life are unclear. It is clear that a sequel to Strange Rites is needed.

For Burton found that her longing is a sign, not the destination. She would later point to her “dark night of the soul,” “I wanted to outrun the Nothing. There was nothing I would not have sacrificed—friendship, relationships, the blood from the heel of my foot—to get it. I sacrificed all of myself. I emptied myself out. I hit bottom, in a thousand different ways, and got what I wanted, in a thousand more, and, somewhere in the middle of my seeking a vague and generic sense of Poetry, I found a specific one…. The faith I found proclaimed a sanctified world, and a redeemed one—an enchanted world, if you want to call it that—but one where meanings were concrete.” 10 She moved from magic to Magic, from myth to myths that are true, from Joseph Campbell to Jesus Christ, from teenage Wiccan maenad to a broken human being being remade in the image of God. In the bohemian world of Manhattan spiritual seeking, she stands today as a beacon of hope, as a trophy of grace, as a point of light in a sea of meaninglessness. I only mention this because this fact may make more Christian pastors and youth leaders take this book more seriously. We are promised that serious seekers find. She writes, “Nor do I mean that I decided to become a Christian, which would imply more agency on my part than I experienced. I mean only that somewhere, between the running and the raging, the trans-Atlantic crossings and the reconfiguring of names, I had something to hold fast to.” 11 There is so much we can learn from Tara Isabella Burton. We dare not turn her into a contemporary postmodern celebrity Christian. It is unlikely because she is inevitably more progressive politically, feminist, occult sympathizing that most evangelical Christian could tolerate. But she would be a welcome member of Lewis and Tolkien’s conversations over a pint at the Oxford’s pub, The Eagle and Child. Our gift to her would be to buy this book, take it seriously, and learn how to navigate spiritually these alien waters.

David John Seel, Jr., PhD (University of Maryland) is a cultural-renewal entrepreneur and social-impact consultant with expertise in the dynamics of cultural change. He lives with his wife on a historic farm in Pennsylvania.