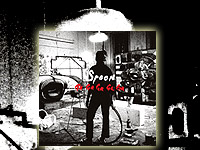 Many years back now when a site called epitonic was “the” place to go for indie music I stumbled across spoon with catchy songs like: “The Way We Get By,” “Paper Tiger” and “Jonathan Fisk” (all from the 2002 album “Kill the Moonlight”)

I followed them for a while but lost track of the band a couple releases later. Then I happened to catch a track from their new release on the radio while driving from Saint Louis up to Iowa. Then I noticed they were featured on one of the Paste compilations. This inspired me to head to Rhapsody and listen to the full album.

The over arching theme for this release would be “fun in the studio.”

Here’s a quick walk through the release:

Don’t Make Me a Target
Here comes a man from the stars…Don’t make me a target.

The music of Spoon takes me somewhere good, somewhere familiar. On this track the piano hammers out straight 4 rhythms and the guitar and hi-hat fall in step. For a bit of interest there is a “heavy” (ready “heavy man” 1970’s like) music interlude in the middle. The song is replete with tape noise and plate reverb (old school recording method to get reverberation).

Motown sounding drums, vibes and production style. The song ends but the ambient studio chatter continues to close out the track.

Don’t You Evah
This one opens with a bass groove and studio voices talking, “Jim will you record the talk back.”

Bet you got it all planned…right?…Famous sounding words make your head feel right.

Love the of clap track action. I think that claps have been in all three songs so far. None of the drum machine samples, but the good ‘ol people crammed in the vocal booth kind of clapping. The song builds into a layered (think “Row row row your boat”) vocal roundabout.

This track offers a funky, Clash, “Combat Rock” era groove. The ultra-clean vocal is remniscent of early Joe Jackson, with a touch of the Elvis Costello feel.

Spoon is very much about establishing moods through catchy riffs and quirky grooves. They tend to establish an atmosphere and then run with it.

My Little Japanese Cigarette Case
“It’s just my japanese cigarette case; bring a mirror to my face; let all my memories be gone.”

This is the track I heard on the radio in Iowa (on KUNI to be exact – great station if you ever find yourself driving through that state). This song features this great middle eastern feeling lute (or possibly mandolin) solo.

So far this is an album with lots of great grooves. Lyrically it’s a bit shallow (you’re getting the best of it in the “lyrical extracts” I’ve been pulling for this review). It seems as if they wrote the choruses and hooks first and then went back and filled in verse material.

Finer Feelings
They told me her look and her commercial appealing. … She’s holding out for some faith.

Another Beatle-esque ditty. Very Ringo on the drums. Keyboards fill the sound out with ambient drones allowing the acoustic guitar to pop out in the mix.

I was dreaming in the driver seat, where the right words came to me.

Spoon’s “Ga Ga Ga Ga Ga” was on a number of end of ’07 CD lists. The music production is fun on this release. There is a sloppiness that comes across at times, but it seems like they are purposely doing this in order to transport the listener into the studio with the band. The tracks are stripped down so you hear guitar, bass, keys and drums clear in the mix. The vocals are typically without effects and mixed front and center – very crisp. Lyrically this is not some philosophical, make-you-think kind of offering. What Spoon offers is a fairly upbeat, quirky CD that’s interesting for the ears and will definitely have you tapping your feet.