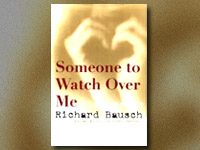 One of my favorite stories is only eighteen pages long. A length that is easily read in a single sitting, during quiet moments when I should be folding socks or making the bed. It might seem that such a short story would be incapable of exploring real issues with any depth. Easily read, easily forgotten, right? But such is not the case with “Someone to Watch Over Me” (from the collection by the same name) by Richard Bausch, an author who is capable of capturing a reader’s attention in the first paragraph:

Here are Marlee and Ted, married one year tonight, walking into the Inn at New Baltimore, an exclusive establishment on the main street of this little village in the Virginia hunt country. Ted’s ex-wife, Tillie, recommended the place, calling it the perfect surrounding for spending a romantic evening. A wonderful setting in which to celebrate an anniversary. The fact that it was Tillie who did the recommending is something Marlee didn’t know about until five minutes ago.

The story —all eighteen pages— takes place over the course of an hour and includes the conversation between Marlee and Ted while waiting for their main course to arrive. As you may have guessed from the opening paragraph, the evening is not a stellar one. What should have been a romantic celebration of love turns into a fight that encompasses not only the immediate circumstances of the evening, but their inherent differences, their individual motivations, and their very marriage.

Bausch has a way of capturing the nuances of a fight that is both hilarious and sobering; I can’t imagine that I’m the only one who recognizes myself in the petty and harsh things Ted and Marlee say to each other.

Someone to Watch Over Me is worth discussing—and one of the best things about using a short story with a group is that it can be read aloud before the discussion begins.

1. What was your initial reaction to this story? Why did you react that way? Did you like Marlee? Ted? Why or why not? Did you identify with either of them? Why? Did your feelings about either character change over the course of the story? If so, what were the turning points? 2. Was their fight realistically portrayed? Did you have a hard time believing any of the things Marlee and Ted did or said? 3. What role does humor play in this story? Does Bausch’s use of humor change the way you reacted to Ted, Marlee, or their situation? 4. From whose perspective is the story told? How would it have changed if the story was told from a different point of view? 5. Except for the flashback, this story is told in the present tense. How does Bausch’s use of the present tense affect the story? Would the story’s impact have changed if Bausch had used the past tense? 6. What key issues or problems were raised in the story? Are any of these issues resolved? Do you think the author is implying that there are no possible resolutions to Ted and Marlee’s problems? 7. What ideals, values, beliefs, or attitudes about marriage are displayed by Marlee? by Ted? Why do you think they married in the first place? 8. Are either Ted or Marlee portrayed as a villain? As a victim? 9. What motivates Ted and Marlee? Are these motivations bad or good? What do Ted and Marlee need from each other? Are these needs the other recognizes? Are they capable of fulfilling each others’ needs? 10. What role does Tillie play in Ted’s life? Marlee’s? Did the author intend that Tillie be symbolic of something (i.e., is she more than simply Ted’s ex-wife)? 11. How did the author use gestures to portray the characters’ emotions and attitudes toward one another? Give an example that stood out to you. 12. There is one flashback in this story, when Marlee is in the bathroom and she thinks about a party she and Ted went to one month after they were married. What is the significance of this scene? Why do you think Bausch included it? 13. At one point, Marlee says, “Look, I was just being silly, OK? I didn’t want it to get serious. I thought it was—we were—I thought we were having a problem about Tillie recommending this ridiculous place. I mean I didn’t know we were talking about the whole marriage.” Do you think Marlee is being honest? Is Ted really the one who has made the conversation serious? In what ways are both Marlee and Ted dishonest about their relationship? In what ways are they able to see clearly what’s going on? 14. Do you think the end of the story is meant to signal the end of the marriage? If so, does the demise of their marriage seem inevitable? If not, what do you think it means? 15. If Marlee was your friend and she told you about her evening with Ted, how would you respond to her? Would your response depend on whether she was a Christian or not? If so, what would the difference be? What if Ted were telling you about the evening? 16. What are the possibilities for redemption in this story? Were there any elements of grace? If not, where would you hope to see redemption or grace infused?