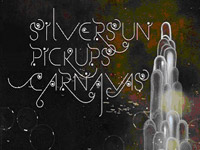 Looking for what is the latest band on the radar of CMJ and Billboard’s Alternative charts I came across the Silversun Pickups. After catching some of their videos on the Billboard site and watching their live performances from various TV shows (these guys are all over Google video and You Tube). So I headed to Rhapsody to check out the album and was pleasantly surprised by what I heard.

From the tracks on Carnavas I’d have to say these guys capture the essence of some of the best of the late ‘80s cool. Think of it this way: you take the vocal of the Three O’clock, the wall of sound of the Smashing Pumpkins, the driving bass of the Pixies, the quirkiness of the Throwing Muses and then throw in a bit of T-Rex pop-styling and interesting guitar layering of Spoon for good measure. Blend it up and you’ve got The Silversun Pickups.

Despite all the comparisons, there is certainly a uniqueness that comes through. It’s not the individual elements, but the product as a whole that makes the Silversun Pickups sound as they sound.

Now on to our listening session.
The album is Carnavas.

1. Melatonin
Their is something about this music that is enveloping and familiar. In this song there are layers of guitars. The drums and bass manage to cut through. The vocals are nestled in the arms of guitar riffs. What is the familiar? The familiar is Three O’clock, Pixies, Throwing Muses, Smashing Pumpkins, T-Rex, Spoon in a blender on frappe for 5 minutes and pour for a bit of a Silversun Pickups smoothie.

My brain doesn’t produce any.
I’m soaring without anything.

Our bodies naturally produce melatonin at night while we sleep. The chemical can impact the vividness of dreams. Some psychotropic drugs increase melatonin synthesis. (Thanks to Wikipedia for these insights.)

2. Well thought out twinkles
This is the song whose lyrical attack reminded me of the Three O’clock. I like that the instrumental mix is pulled back a bit. It’s not this Green Day wall of guitars; rather, we get sparse layers which present then intertwine. I love that keyboards are coming back, here their use is tasteful and really fills out what’s going on. The song crescendos into a blanket of siren guitars. The “integrated in your mind” vocal pulls a bit of a Billy Corgan vocal style.

3. Checkered floor
I dig the various layers of guitar that kick this tune off. This is a good headphones song. It’s a good headphones album, really, for the reason that musically you have a surface-level simplicity that parallels a secondary layer of complexity. There are a few times where the layering of sounds makes things a bit muddy – but this is rare. I like that some of the textures that emerge in again akin to some of the best of the late ‘80s bands like My Bloody Valentine or the early grunge of Mudhoney.

Concealed
Pass it on
Appeal
Play along

Spiritually there is an emptiness that is conveyed through all this. There is a seeking for something that is often seen as the next thing. The next life perhaps. But ultimately the jars are empty. Truth is concealed or mistaken for something else.

4. Little lover’s so polite
Here is one of the tracks that is getting some indie airplay. I’ll continue to draw upon the 80’s palette for descriptions as that’s where this album is takes me. This tune is very Breeders, Pixies sounding. The similarities probably start with the bass and guitar syncing up on sixteenth note rhythms. The farfisa organ in the background is something again that was found in such luminous bands as the Three O’clock or Game Theory.

Clever wordplay here. The consonant sounds become the attacks that parlay with the musical interplay. It seems that meaning is unnecessary with the lyric. Just cool combinations of words and patterns that aid in the digestion of the music bed.

5. Future foe scenarios
Again we get this sparse, sound effect laden open. I will speak a bit to musicianship on this album. It’s not a “musician’s friend” kind of recording. What I mean by that is that in terms of technical or pyrotechnical feats on electronic instruments this release does not stand out. That’s actually good. The strength here is in the arrangement and approach. This band uses sound for effect. The band uses words for effect over meaning. It’s very theatrical in some ways. Okay, I’ll use the “P” word here as I think it fits: these guys are very postmodern. Music that pleases the performer and the listener for the moment – but has no meaning of it’s own. Yet the shear velocity of the delivery demands your attention.

Whatever they’re doing – it works.

6. Waste it on
I like the open which is very math. The vocal is forced to carry in “waste it on” – it’s not a singing voice. Brian Aubert/s voice comes across here as an amalgamation of Billy Corrigan (Smashing Pumpkins), Michael Quercio (Three O’clock), and Kim Deal (Breeders/Pixies).

The closest we get to waxing poetic. The naturalist doth emerge to present pictures of meadows, rivers and mountain ranges.

8. Rusted wheel
Music for film credits – is how I’d classify the opening of this track. It fits as all band members were aspiring film makers themselves. Like other tracks this one starts with a sound effect laden, layered, romp of guitars and things which bounce between the ears. There is a slow building. The drums fully kick in about 1/3 of the way into the track. The full band crescendos 1/2 way through.

I’ll be curious to see whether Silversun Pickups find themselves garnering start status or whether they will be forced to find another plan. So far they’ve been on Letterman and Leno and many others – so they are off to a good start.

9. Dream at tempo 119
A song in need of a movie soundtrack to appear on. I picture LA street scene. Maybe driving in car, hanging out in clubs. Think modern day “Less Than Zero.”

Sometimes the lyrics are almost like shot descriptions in a movie. Less telling a story, more describing an aesthetic.

10. Three seed
The voice stands out on this track. I like how the musical strands are slowly woven in. There is no build up on this track. It stays on the ground floor, which works well with the lyric.

11. Common reactor
This last track opens with a frenetic drum groove, the guitar droning distorted harmonics, and layered vocal unison. Eventually the driving bass steps in. Rather than a build up on the chorus everything drops out on “now its too late.” The track ends with lots of whacked digital machine gun style guitar effects that ultimately will get you to prematurely stop the song. The kind of thing kids will dare each other to listen to real loud in headphones to hold their cool.

But I couldn’t put it down

The lyric describes this album. There is something very common about Silversun Pickups, something familiar in a late ‘80s alternative sort of way. Their music could aptly be described as a “stream of motion blur that swirls.” And certainly this recording is hard to put down. It’s just interesting to listen to.

1. Why are the Silversun Pickups getting attention for the national critics?

2. Is there a message in this music? What is that message?

3. Is “postmodern” an appropriate label for the music of the Silversun Pickups?

4. Whether purposely or subconsciously it seems that these guys appropriate stylings from some of the best of the late 80’s alternative set. Check out some of these bands and see if you agree: The Breeders, The Pixies, The Throwing Muses, Smashing Pumpkins, The Three O’clock, Game Theory, My Bloody Valentine – thrown in some (early) Spoon and T-Rex for good measure.

5. Is there anything political, spiritual, philosophical, sociological going on in the lyrics of this band?

6. Is it possible to disregard lyric or treat it as functional only versus presenting a message? Voice as instrument versus voice as messenger?

7. Do lyrics have to tell a story? If there is a story being told, what is the story?

8. If the Silversun Pickups define the “now” sound, then what does that say about the “now” listener?