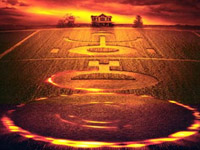 There is plenty about Signs we’d love to mention in this review, but won’t because that would ruin it if you haven’t seen it yet. We encourage you to see it and then discuss it, with both fellow believers and with non-Christians. It’s not only a finely crafted piece of cinematic art, but it invites us to reflect on issues that matter. Shyamalan is famous for inserting twists in his plots, often in the final scenes of the movie. Twists abound in Signs—not just at the end—but we’ll not reveal them here.

M. Night Shyamalan (pronounced SHAH-ma-lawn) is 32 years old, was born in India and raised in the U.S. The “M.” stands for Manoj, and “Night” was a name he made up in college; his actual middle name is Nelliyattu. The silver charm he wears around his neck was a gift from his father, and contains Sanskrit proverbs which “keep him grounded.” Raised Hindu, his parents sent him to a private academy associated with the Episcopal Church. Both parents are physicians, and his wife and nine other family members have doctorates. In Signs, the artwork done by Bo Hess, played by the charming Abigail Breslin, was actually done by Salek, Shyamalan’s daughter.

The most important fact about Shyamalan, however, is that he is one of the finest story-tellers at work making movies today. Signs is a well made sci-fi thriller which is also a sensitive exploration of important, timeless, eminently human questions. Questions of faith, of providence, and of whether life is a series of meaningless coincidences in which we hope for luck, or whether there is something—someone—beyond the here and now to give it meaning. Its ability to unfold a suggestively allusive portrayal of life that encourages even the most thoughtless postmodern to think renders efforts like Left Behind artistic humiliations of the first caliber.

Shyamalan’s creative playfulness is evident in the way he has fun with his audience. The trailers for Signs, for example, give the impression that this is an ordinary shoot-’em-up-alien-crop-circles-flick. Crop circles and aliens, indeed. Yes they appear, but by the end seem almost incidental. They provide a few moments of delicious fright, but are merely the means to a greater end—steps along the way in a pilgrimage of faith.

Signs is scary, but it doesn’t depend on the cheap tricks often used in thrillers. We aren’t assaulted by noise, for example, but instead enveloped in silence. A silence so deafening that the barking of a dog we knew was there can make us jump. This is the soft quiet of unease, like the faint yet disturbing sounds we hear in our own house when as children we were left alone for an evening. Shyamalan uses light and darkness effectively, as well as the movement and placement of the camera. As the family walks across the yard of their two-story farmhouse, the camera follows them from within the neighboring rustling corn field, as if we were not the only creatures that happen to be watching. Shyamalan also uses comic relief brilliantly, using humor to relieve the tension. One gets the impression this is a thriller that was made not to scare us, but to scare us into thinking.

Also worth noting is the absence of vulgarity. Movie enjoyment for the average Christian requires a struggle to get beyond the shores of language, violence, and sex into the deeper waters of thoughtful biblical reflection. Yet here is none of that. No sex, nudity, profanity; and even the violence against the alien invader is both muted and justified. Shyamalan is recovering some of the true art of storytelling. And surely, he is not far from redemptive storytelling.

Just as Alfred Hitchcock made cameo appearances in his films, Shyamalan has appeared in his last three movies, and in Signs he plays a more substantive role than usual. Note the scene in the pizza parlor, when the whole family stares at Shyamalan. “Is he the one?” asks Bo. Later we discover he is the one who is behind the pain in their father’s heart and life, and his loss of faith. Of course Shyamalan is also the one who created the characters, wrote the story, and directed the movie. We suspect he enjoyed writing that scene.

On one level Signs is the story of Graham Hess, played by Mel Gibson, an Episcopal priest who lost his faith when tragedy took his wife. His younger brother, Merrill, played by Joaquin Phoenix, has moved in to help with the farm and raise the two children, Morgan (Rory Culkin) and Bo. Mysterious crop circles appear in their corn field and quickly it becomes clear that an invasion from outer space has begun. As they retreat to their basement in fear as the aliens close in, life is stripped to its essentials. And it is on this level, within hearts and minds, that the real action transpires.

Some think the ending is too neat, but we disagree. Sometimes, by grace, happy endings actually occur in this sad world.

1. What was your initial reaction to the film? Why do you think you reacted that way? 2. In what ways were the techniques of film-making (lighting, cinematography, sound track, casting, direction, dialogue, sets, editing, etc.) used to get the film’s message(s) across, or to make the message plausible or compelling? How were they misused? 3. What is the message(s) of the film? What is attractive here? How is it made attractive? Where do you agree? Where do you disagree? Why? In the areas in which we might disagree, how can we talk about and demonstrate the truth in a winsome way in our pluralistic culture? More specifically, what do you think of the depiction of “faith” in the movie? Is it similar to biblical faith? Why or why not? What did you think of the depiction of providence? What Scriptures come to mind as you reflect on Signs 4. What do you think the cameo appearance of the writer/director, M. Night Shyamalan, added to the film? Some argue that film is primarily entertainment, and that compared to literature, it is by and large unable to raise deep questions in a meaningful way. How does Signs figure into your position on this issue? 5. Based on the previews, what kind of movie were you expecting to see? What role did the crop circles and aliens play in this movie? 6. What does the title, Signs, refer to? What specific signs did each character provide in the overall plot and the case for faith (as opposed to chance)? 7. With whom did you identify in the film? Why? With whom were we meant to identify? Discuss each main character in the film and their significance to the story. 8. What insight does the film give into the way postmodern people see life, meaning, and reality? How can you use the film as a useful window of insight to better understand your non-Christian friends and neighbors? Might the film be a useful point of contact for discussion with non-Christians? What plans should you make?